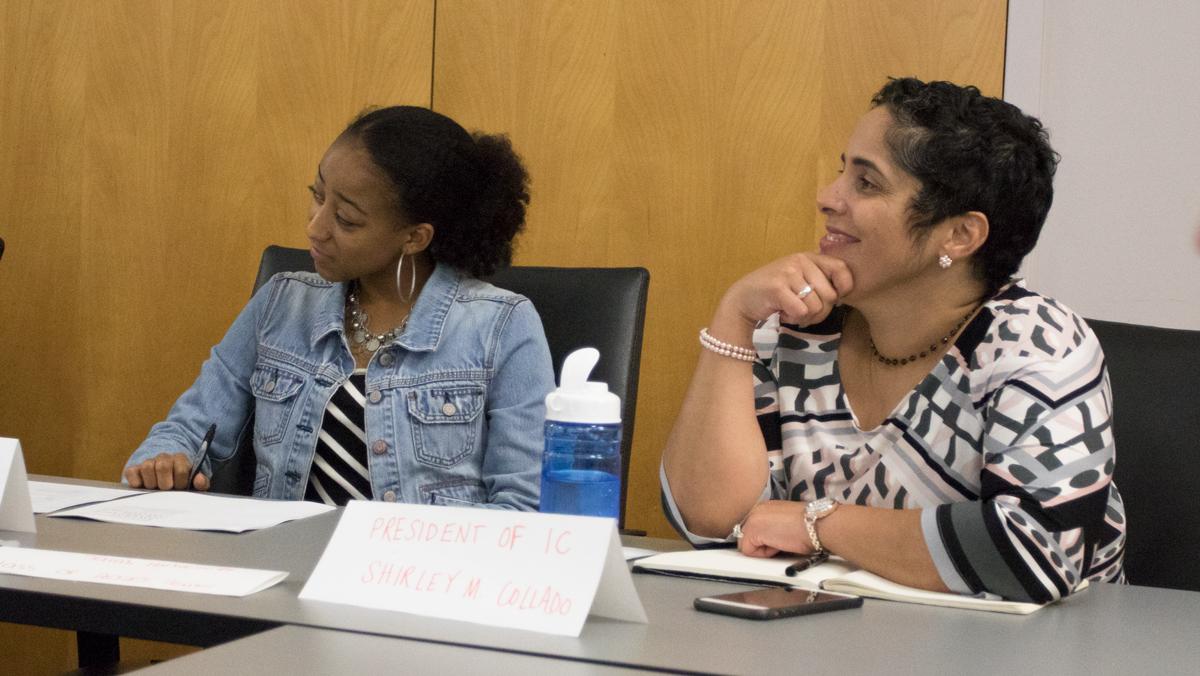 President Shirley M. Collado addressed the Student Governance Council Sept. 25 to get feedback from students and talk about the start of her tenure as president.

Collado said she feels an “affinity” for the SGC, and she views the council as a partner. She said she wanted to make sure that bills proposed by the SGC do not get neglected once they are passed. She said that senators are partly responsible for that but mentioned how shared governance should help bills go places as well.

She then talked about how Rosanna Ferro, the newly appointed vice president of the Division of Student Affairs and Campus Life, would help ensure bills go places as well by providing a direct line of communication between students and administration.

Joe Cruz, Class of 2019 senator, asked about her background in psychology and how that can be applied to the college to address mental health. Collado answered by talking about the growing importance of mental health. She also discussed creating a mental health campaign on campus to help address that issue.

Alisar Awwad, international senator, asked Collado to respond to President Donald Trump’s latest travel ban. Collado said there were a lot of anticipated and unanticipated decisions being made on Capitol Hill. She said she wanted to be really thoughtful about when and how she uses her voice to respond to political decisions and that she received a lot of positive feedback and some negative feedback to her responses on Charlottesville and DACA.

Collado said she anticipated the Title IX changes from the Trump administration, and she assured the SGC that the college will remain committed to pursuing justice in sexual assault cases on campus.

Jake Barney, class of 2018 senator, then asked about her thoughts on a petition for students to have their names called at commencement that has been circulating on social media. The petition, which was started by parents on Change.org, has collected over 2,000 signatures. Collado said she was not aware of the petition but she was curious about students not walking the stage when she first became president. She said there are likely some logistical issues that would need to be addressed but that she was open to the idea.

She said she hopes students feel they don’t always have to fight or struggle for changes they want on campus, and she is very open to ideas and is always looking for ways to improve life on campus.

“I am grateful to have been invited,” Collado said after the meeting. “It was very helpful to hear some of the things that are very important to them as they start their year as a council.”

She also said she hopes to return again later in the semester.

Senator-at-Large Lucas Veca, who did not get a chance to ask his question about ideological diversity on campus, said he was impressed with her presentation.

“She’s all about student engagement, and I think that’s really what the college needs at this point,” he said. “The students need to know that they matter to the administration because the administration has a problem with talking to its students.”

Last year, former President Tom Rochon held a similar meeting with the student government to get input from students and reflect on the previous year. At that meeting, Rochon fielded tough questions about race relations and the difficult balance between financing the college and focusing on academics. He also told the SGC that he wished he spent more time with students on campus. SGC President Carlie McClinsey said that meeting was much tenser than this one with Collado.

“When Tom Rochon came, there was a lot of tension in the room, specifically because SGC was the group that initiated the vote of no confidence,” she said. “I think that this year, the relationship between administration and SGC, in particular, is a lot stronger.”

The student vote of no confidence took place during the Fall of 2015, when students protested the racial climate on campus. Of the 3,756 students who voted, 2,550 voted “no confidence” in Rochon.