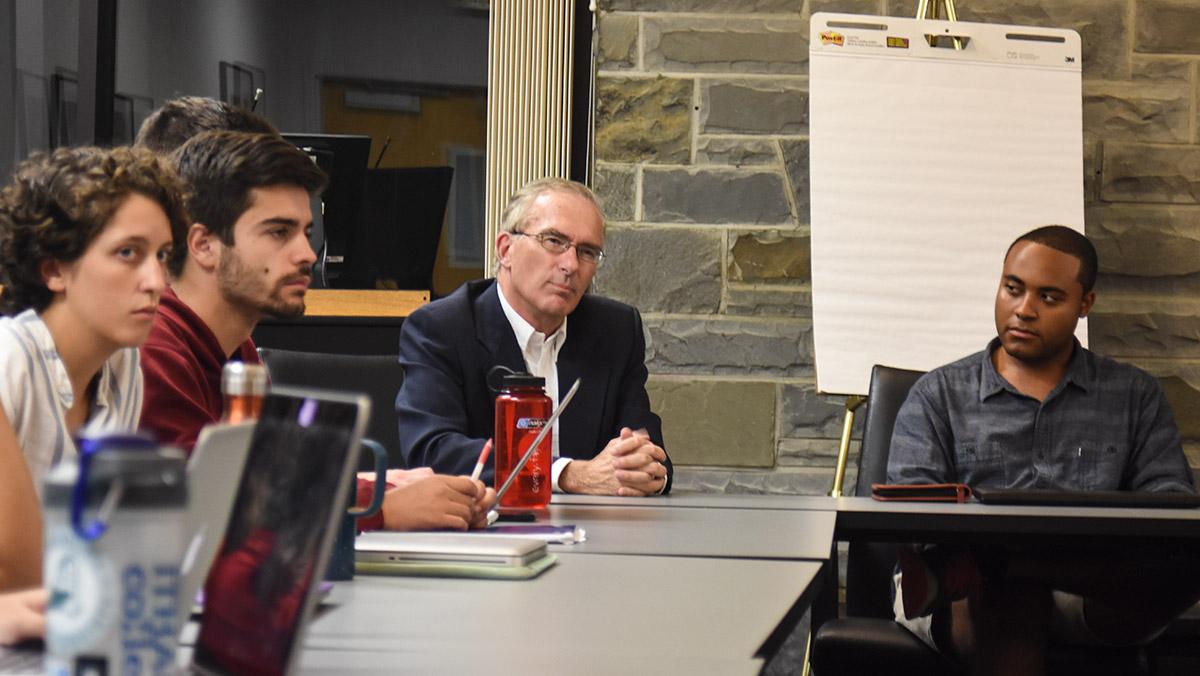 Ithaca College President Tom Rochon joined the Student Government Association’s Sept. 19 meeting, where he answered questions from the SGA on issues affecting the community and touched on key discussions in higher education. Then, the SGA voted to change its name to the Student Governance Council to align with shared governance goals.

SGA members questioned Rochon about his reflections on the past year, administrative support for programs affecting students, and his and the college’s stance on trigger warnings and the revised alcohol policy. But first, Rochon opened with a statement about the current discussions in higher education today, including race and free speech, among others. He said an institution has to balance the values of those on both sides of a given debate.

SGA President Marieme Foote asked Rochon what he took away from the past year at the college.

Rochon said that, upon reflection, there was a certain sense of disappointment, but specified that it would have been helpful if he had had more of a presence on campus.

“In the last three or so years, I was less of a campus presence than I had been in the prior five years, and there are a number of reasons for that, of which the main one is we launched into a fundraising campaign, and I spent much more time off campus seeking to lay the foundations for a successful campaign,” he said. “It’s not as if I was taking extended vacations.”

Michele Hau, vice president of academic affairs, questioned whether stringency in the budget has adversely affected the support for programs like honors, the study abroad office and the Office of Civic Engagement —  all of which have either experienced cuts or have had directors step down.

Rochon acknowledged the lack of directors for honors and civic engagement, and said he supports the cuts to study abroad programs. He also said there are examples —  like the Center for Faculty Excellence and the Integrated Core Curriculum — that he said show the benefits of the budget’s allocation of funds.

“To me, the thing that I have pride in in the past eight years is not financial stringency or academic excellence or improving academic quality — it’s the two together because doing either one separately is really easy; doing the two together is much harder,” he said.

Several senators, like Senator-at-Large Cat Proulx, questioned him on the administration’s lack of a stance of trigger warnings and argued that, though the conversation is important to have, there are people who are being affected in the meantime.

Rochon said if the college were to come down with a stance on trigger warnings, it would take place in the future. He said the use of trigger warnings must be based on relationships between faculty members and students, or, more broadly, on specific subject matter.

“This is what I think today, and it could change — we’re in the middle of this amazing societal debate — but as of today, I think that a policy about trigger warnings is way too blunt of an instrument and would do some good, and it would do some damage,” he said.

Conor Friend, Class of 2018 senator, asked Rochon if he thinks the new alcohol policy, which tightens restrictions on alcohol paraphernalia, will push students off campus to drink.

Rochon said the details of the new policy were new to him. He added that there is a balancing act between allowing students to be adults and restricting illegal activities, and that the policy was an example of that balancing act.

After Rochon had spoken, the SGA passed a bill to officially change its name to the Student Governance Council to align, linguistically, with the other campus constituencies like the Faculty and Staff Councils. The bill is a part of the SGA’s push toward shared governance, which began with the Shared Governance Bill that was passed last year.

The bill, named Change SGA to SGC, passed 18–1 and will become an amendment to the SGA Constitution. It will require the SGA to change all official documents as well as all of its social media accounts. Foote said at the meeting that this bill is all about language and how other groups on campus perceive the SGA. Since the other councils participate in administrative decisions, she said the change to calling SGA a council may stir discussions about including it more.

“I wanted this bill to also jump–start conversations on shared governance,” she said.