College aims to prepare students for new frontiers of China 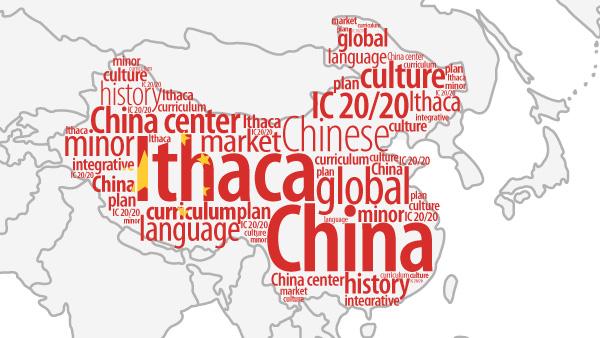 Ithaca College has expressed a desire to prepare students academically for the new economic and political frontier of China, but it’s still a long way from helping students find success across the ocean.

To prepare students to capitalize on the opportunities of the fastest-growing economy in the world, the college is expanding Chinese language and history classes, professors across campus are organizing more study-abroad programs to China and the college’s IC 20/20 strategic plan outlines the creation of an Ithaca Center in China by 2020.

According to the IC 20/20 vision plan, the center will be established by 2014 and will be available to students who are interested from all schools by 2020. The exact nature of the center cannot be determined until Ithaca College and another Chinese college or university finalize an agreement, Marisa Kelly, provost and vice president of academic affairs, said.

“We have a number of programs with very strong connections already in China, and we have particular educational links there, which we thought would be very valuable for our students,” Kelly said.

Kelly said the educational links include the study-abroad programs organized by the schools of Health Sciences and Human Performance and Business, and the School of Music’s recent recruitment efforts in China.
The national interest in China is growing. The Obama administration’s 100,000 Strong Initiative, which called upon college and university students to study abroad to China, led to the founding of the 100,000 Strong Foundation. The non-profit, non-government organization encourages students to travel to China to start businesses and facilitates study-abroad programs with funds to strengthen social, economic and diplomatic ties with China.

After studying abroad to China, some Americans move to China for economic opportunity. According to a 2009 article by The New York Times, the low cost of living and business expenses in China has attracted a “second wave” of young American college and university graduates to start businesses or take management positions in Chinese companies.

The college is eager to forge ties with Chinese universities and begin creating the China center, Kelly said, and will support curriculum on-campus to help students prepare for China. Kelly said the faculty will create more curricula as the China center develops.

“Curricular proposals always start with the faculty, and they move forward through various approval bodies,” Kelly said. “It is more likely that as the center becomes a reality, we will know more about what the implications are for the curriculum here.”

Even without the center in place, professors are creating more courses about Asian history and culture that dovetail with the new Asian-American Studies Minor, which will be available to students by Fall 2013.

Liu Lu, assistant professor in the department of history, is creating courses on Chinese history, which has changed dramatically since the 19th century. She is piloting a freshman seminar about modern Chinese society as part of the college’s Integrative Core Curriculum. She was inspired by another freshman seminar organized by Guan Hongwei, associate professor of health promotion and physical education, and Nicholas Quarrier, clinical associate professor of physical therapy.

As education on Chinese culture is gaining headway at the college, the language course is also expanding despite limited resources, Li Hong, lecturer in the department of modern languages and literatures, said.

According to a 2011 article by China Daily, more than 300 million Chinese students are studying English, and the rate is gradually increasing. However, according to a 2010 article by The New York Times, only 9 percent of Americans speak a foreign language, and the federal government spends 25 percent less, adjusted for inflation, on foreign language training at the university level than it did 40 years ago.

Learning the Chinese language is essential to understanding Chinese culture, but its complexity can be daunting. A typical Chinese newspaper requires the reader to know 3,000 characters. Tones are crucial to conveying the proper meaning. For example, the only difference between the words for horse and mother is the tone. There are also numerous dialects of Chinese. Mandarin is the standard dialect throughout China, but many Chinese people, especially in Hong Kong, Macau and southern Mainland China, only speak Cantonese.

Senior Adrienne Cocci took Chinese 101 after studying in China over the summer as a rising junior in the School of HSHP’s Eastern medicine study abroad program.

“Learning about Chinese culture, no matter what your major, can be useful in the long term,” Cocci said.

Michael Richardson, associate dean for faculty and special initiatives in the school of humanities and sciences, said two years of Chinese language, which the college provides, is a good starting point.

“In general, two years of college-level language study gives students a very strong foundation for a study-abroad experience,” Richardson said. “The study-abroad program would be beneficial for our students, and I think it would impact our language enrollments in a positive way.”

Liu would like to see more Chinese-related courses offered throughout the college’s departments. Since Liu was hired in 2010, she has been creating more levels of history courses related to Chinese topics.

“I think we have enough courses for students to take, but there is area for improvement, especially in the language and literature department,” Liu said. “There should be more language courses here that could prepare Ithaca College students so they have at least some minimum experience before they go to China and study there.”

Cornell has a full four-year Chinese language program featuring both Mandarin and Cantonese. Ithaca College has one professor, Li, teaching the first two years of Mandarin that have been available since Li was hired in 2007, and will be hiring another professor to teach a new third year of courses.

A third year of Chinese language courses is in the works, Li said. Advanced Conversational Chinese, in which students will learn how to make an argument or presentation, will be available by Fall 2013, while another course dealing with Chinese culture and literature will still be in planning until Spring 2014 at the earliest.

Li has been working toward creating a Chinese minor or a broader Asian studies minor. She said having a minor will make the IC 20/20 plan for China more beneficial for students.

“The things within IC 20/20 that are closely related to China need to be specifically emphasized and highlighted,” Li said. “The programs need to be publicized and promoted to make a link to IC 20/20. … All these have to be intrinsically linked and promoted as a package so that students know that there are steps you need to take and they link to an overall big picture of the endeavor of IC 20/20.”

Preparing students to learn about China’s culture and economy is a daunting task for the college, but it is necessary for American students to have this knowledge to succeed in the modern economy, Kelly said.

“In the 21st century, the ability as a future businessperson or entrepreneur … to engage in China, to understand how to work collaboratively with the Chinese, seems to be something that makes a lot of sense,” Kelly said.