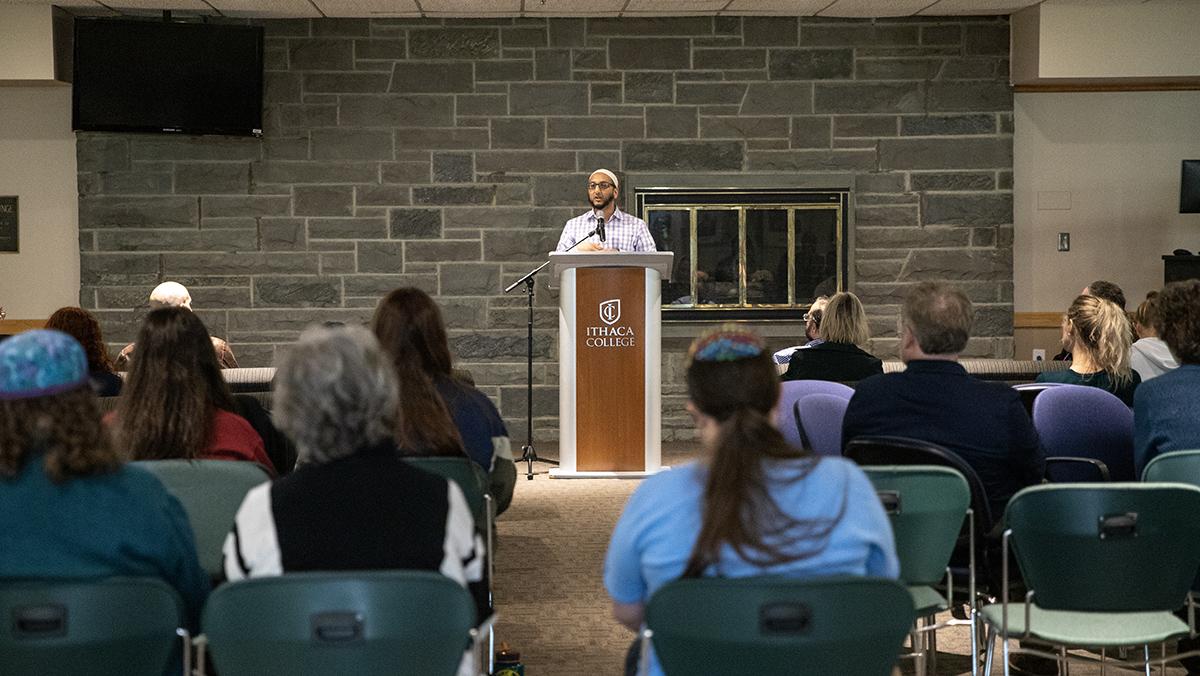 Jasmine Scriven/The Ithacan
The event began with an introduction from Yasin Ahmed, director of the Office of Religious and Spiritual Life.
By Clare Shanahan — Assistant News Editor
Published: November 8, 2022

About 40 members of the Ithaca College community gathered to discuss recent acts of antisemitism on campus at a campus-wide gathering Nov. 7 in Klingenstein Lounge in the Campus Center.

The event began with an introduction from Yasin Ahmed, director of the Office of Religious and Spiritual Life. Following the introduction, attendees broke into small discussion groups to share reactions to these repeated incidents of antisemitism and to discuss how potential changes can be made to stop future incidents. When creating groups, Ahmed suggested attendees intentionally try to create a mix of students, faculty and staff to share a broad range of needs and ideas.

“We want to just make sure that we’re responding, that it’s not necessarily a passive response, but we want to be active,” Ahmed said. “So we’ll focus a lot on that tonight, on brainstorming and thinking about ways that we as a community can respond better, build better, become better.”

Ahmed said all of the recommendations made at the gathering would be noted and considered by the task force on antisemitism and hate symbols, which he said would be a group including people from throughout the college, including students, to feature as many voices as possible in future conversations. In an email to the campus community Nov. 4 announcing the three reported swastikas, President La Jerne Cornish said the task force had been convened to decide on immediate actions and long-term changes to stop acts of antisemitism at the college.

“I would encourage us to think about this [gathering as] not being a one–and–done opportunity,” Cornish said. “We are an institution of higher education. Students are here to get skills, knowledge, dispositions, to engage, interact, respond in a world that’s constantly changing, and so how do we make whatever we do become a part of what it means to get an education at Ithaca College?”

Following small group sessions, representatives shared the suggestions, goals and feelings they had discussed with the broader group.

Senior Shosh Cohen said that as a Jewish student, it has been extremely difficult to navigate school and daily life in the wake of these incidents.

Cohen said they fear every day that they will be the direct target of antisemitism at the college and see a swastika drawn on their own front door.

Ahmed said the Office of Public Safety and Emergency Management (OPS) has increased its security presence on campus and reinforced an announcement from Cornish’s Nov. 4 email that there will be additional security cameras installed on campus in the coming weeks.

“We’re gonna continue to make sure that our Jewish students and all minority students and students who feel unsafe on campus are protected,” Ahmed said.

Cohen said they would like to see more action happen outside of Hillel or events convened in direct response to hate.

Brett Bossard, executive director of the Office of Alumni and Family Engagement, said that while the input of employees of the college is important, the swastikas on campus are far more impactful for students.

“This isn’t just the office or the school,” Bossard said. “It’s where students live and this is an attack on their home.”

Junior Hayley Armstrong said that although students learn about diversity in learning modules prior to their first-year or transfer orientation, these modules are unlikely to be remembered by students. However, Armstrong said one thing every student has to participate in is the college’s seminar courses, which could include more diversity-based education and antisemitism-based education. In Fall 2016, many first-year seminars added diversity workshops to their curriculum, but Armstrong said these classes could include more.

Cohen said that in order to make students understand how negatively impactful swastikas are as a symbol of hate, the college can advertise diversity courses more and emphasize intersectionality. Cohen said one important message to get out to the community is that swastikas are not just a symbol of antisemitism but are an intersectional symbol of hate that affects many different groups. According to the U.S. Holocaust Memorial Museum, although Jewish people were the group most largely targeted by Nazis as part of the Holocaust, other groups were targeted as well, including Roma people, disabled people, gay men and Polish people.

“I think a lot of times, we really just see it and we think, ‘Oh, it affects Jewish people’ because that’s the main group that we associate it with, even though it really does affect all of us,” Cohen said.

Cantor Abbe Lyons also said it is important to address antisemitism with consideration for related issues of hate, like white supremacy.

Armstrong said media can be used to help spread messages against antisemitism and hate, especially with the help of students and professors in the Roy H. Park School of Communications as resources. Armstrong suggested that this is just one example of how each school can take on individual efforts and initiatives to spread anti-hate education.

“Media could absolutely reach a lot of people with messages like that and just kind of [amplify] those voices through media and through film, because I’m sure people watch their screens every single day and stuff on social media,” Armstrong said.

Ahmed encouraged attendees to report anything they see, no matter how small, that may be related to these incidents to the OPS, to share on social media how others can do the same and to use the college’s Bias Impact Reporting Form if they feel they have experienced a bias-related incident.

“We can address things, but we have to know they’re happening in order to address them,” Ahmed said. “If any of you see anything, I know there’s a lot of different instincts that people have. Just call OPS right away.”

“The mobilization created an environment to do this work and made it more obvious that we should do the work,” she said.

First-Year Seminars at IC include diversity workshops in cirriculum

antisemitismHillel at Ithaca CollegeJames J. Whalen Center for Musicoffice of religious and spiritual lifeOffice of Student Equity and Belongingswastikas