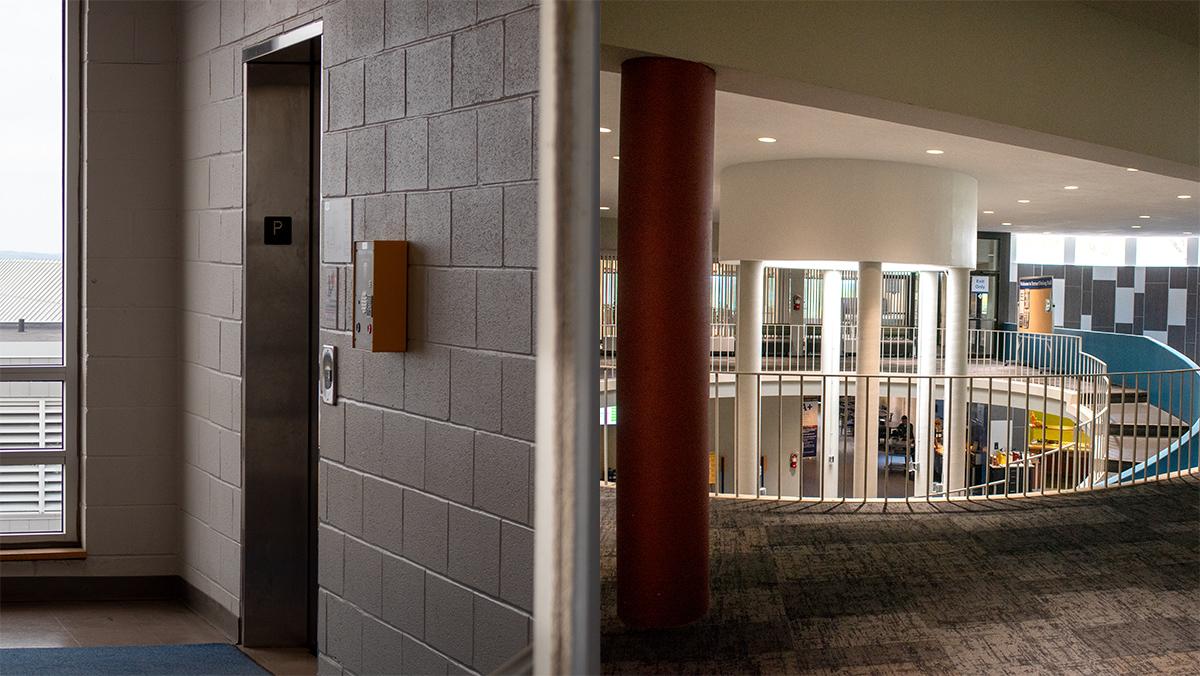 Kalysta Donaghy-Robinson, Spencer Park/The Ithacan
The two most recent swastikas reported at Ithaca College were found in the Baker elevator and outside of a Kosher Kitchen storage room near Terrace Dining Hall. Tyler Wagenet, physical security systems engineer in the Office of Information Security and Access Management, said via email that there are no security cameras in any location where swastikas have been found.
By Clare Shanahan — Assistant News Editor
Published: October 26, 2022

At Ithaca College, there have been five reported instances of swastikas being drawn on or carved into surfaces on the college campus since January 2022 — a number that is significant when compared to the number of incidents in 2021 of antisemitism reported on college campuses in New York and nationwide.

The most recent incident of an image that appeared to be a swastika at the college was reported Oct. 11 after the symbol was scratched into the door of the Baker elevator in the James J. Whalen Center for Music. This is the third swastika to be found in the vicinity of the Whalen Center and the attached Baker Walkway in 2022. On Oct. 20 Dan DeCaria said in Ithaca College Intercom that the elevator was unavailable due to required maintenance. In an email, DeCaria said the closure of the elevator was because of failure of a part and unrelated to the incident with the swastika.

The student who reported the symbol to the Office of Public Safety and Emergency Management (OPS) on Oct. 11 said they believed it was carved after they took the elevator around 5 p.m. and before they took the elevator once again at 9 p.m., when they saw and reported the symbol. The Ithacan has chosen to keep this student anonymous because, as they are a Jewish student, they fear retaliation for reporting the swastika to the OPS.

“There was a swastika and then there was an S on either side of that, and it just, my stomach just dropped and my hands were kind of shaking,” the student said.

According to the U.S. Holocaust Memorial Museum, the letters SS written together are also historically antisemitic, as they are shorthand for Schutzstaffel, the Nazi police force responsible for carrying out the Holocaust through the murder of millions of Jewish people.

The student said that finding the symbols was extremely upsetting for them because of the amount of antisemitism they have encountered recently both at the college and elsewhere.

“I just called my mom and I was telling her what happened and I was just, like, crying and I was, like, asking, ‘I don’t understand why this keeps happening,’” the student said. “Like, what did we do? Because it’s just so frustrating to have to keep seeing it.”

The student said they found the swastika in the same week that rapper Ye, formerly known as Kanye West, posted a series of antisemitic tweets, further increasing their feeling of extremely frequent antiseimitism. West Ye has shown a pattern of antisemitic behavior throughout October, and references to white supremacist ideologies through multiple platforms including in footage from an unaired interview and behavior on a podcast appearance.

Tyler Wagenet, physical security systems engineer in the Office of Information Security and Access Management, said via email that not only are there no surveillance cameras in the Baker elevator, but there are no cameras in any of the locations on campus where swastikas have been found.

“We have plans in place to put cameras in these (and a number of other) locations around campus, but there are a number of limiting factors currently, not limited to the extreme delays as a result of the supply chain limitations,” Wagenet said via email.

Tom Dunn, associate director and deputy chief in the Office of Public Safety and Emergency Management, said there has to be a balance between the privacy of campus community members and having surveillance resources available to the Office of Public Safety. Dunn said even when there are surveillance cameras available, they are not always the most useful tools because they may get a low quality image.

Dunn said via email that in the five cases of swastikas on campus in 2022, a suspect has not been identified in any case.

“It doesn’t change how we operate,” Dunn said via email. “Each case is viewed individually and then we also look at them collectively and we haven’t drawn any conclusions.”

Dunn said in an interview that in cases of antisemitism and other bias-related incidents on campus, the Office of Public Safety will work with outside parties like the state police, Hillel International, the FBI and Safety and Security International, and campus officials like Luca Maurer, interim executive director of Student Equity and Belonging, and director of LGBTQ Education, Outreach & Services; Lauren Goldberg, executive director of Hillel at Ithaca College; and Yasin Ahmed, director of Religious and Spiritual Life. Student representatives from Hillel at Ithaca College were unable to respond to a request for comment by the time of publication.

“[Contacting other parties is] not something we do because this has been an unprecedented number of times, we do that routinely,” Dunn said. “These types of cases are difficult to solve because you either need an eyewitness or you need a pattern of behavior or you need a suspect.”

The student said they would like to see more surveillance on campus to increase student safety and clear guidance from the administration about consequences for drawing swastikas on campus.

“If you were caught with alcohol, people know the consequences for that,” the student said. “So it’s obviously a completely different situation, but just making the consequences of it more public knowledge and not something you have to go look for I think would deter people, hopefully.”

According to the Student Conduct Code (SCC), students at the college have the right to freedom from discrimination. Any instance of bias-based harassment or intimidation by a student “is cause for disciplinary action.” In the SCC, there is a wide range of disciplinary action described ranging from a written warning to expulsion.

Katie Newcomb, assistant director in the Office of Student Conduct and Community Standards, said via email that bias-related incidents are evaluated similar to any other violation of the SCC.

“When determining sanctions, we consider the severity of the offense, conduct precedents for similar offenses, a student’s prior conduct history, as well as other mitigating factors,” Newcomb said via email.

Following the instances of swastikas being drawn in February, the college administration hosted a series of “Day of Learning” events to support the community and educate on bias and discrimination. Following the Oct. 11 incident, a campus-wide gathering was held in the Muller Chapel on Oct. 12, the evening before fall break began. The student said that while the events and response from administration following these incidents has been reasonable, they do not feel that it will create real change.

The student said they would like to see more of a response from the administration because they think the recurrence of these instances without consequences could open the door for further escalation in bias-related incidents. They said the current response from administration may not be enough.