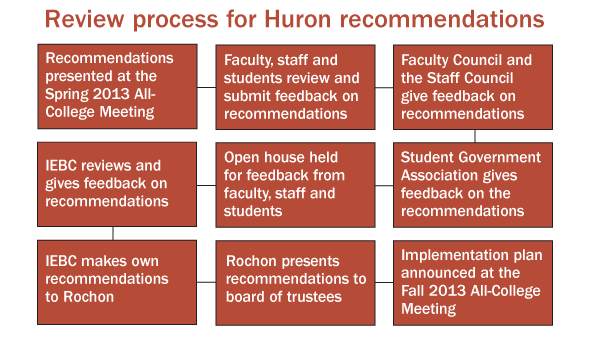 Ithaca College President Tom Rochon has announced “Under 3 Over 3,” a multi-year plan aimed at keeping the annual cost increase for students at less than 3 percent, while maintaining compensation pools for college employees at 3 percent or more.

The plan, which aims to save about $1.5 million each year, includes closing the Rochester Physical Therapy Center and bringing its instructional activities to Ithaca, increasing retention rates for first- and second-year students, aligning programming capacity with applicant demand and establishing a parking permit fee for employees.

These plans were announced Aug. 22 during the All-College Meeting of faculty and staff, which was closed to students and the media. Documents and information about the meeting were released to The Ithacan by a member of the college community who wishes to remain anonymous.

During the meeting, officials also announced that the college is now classified as one of the 50 most expensive private, four-year, not-for-profit institutions in the U.S. by to the Department of Education. Rochon said this further highlighted the need for the “Under 3 Over 3” plan.

“I might add, even though this was not a subject of the All-College Meeting, that we have also, in future budget planning, resolved to make the most significant efforts we can with respect to financial aid, both in terms of external fundraising and in terms of the commitment of internal budget resources,” he said.

Peter Rothbart, chair of the college’s faculty council, commended these measures by the college.

“The concept of ‘Under 3 Over 3’ is good, especially given President Obama’s recent focus [on college affordability],” Rothbart said. “I think the president here [at the college] has been well aware that we need to cut costs.”

Rochon made these decisions based on recommendations made by the Institutional Effectiveness and Budget Committee, which comprised 24 faculty and staff members, and two students. IEBC recommendations were based on proposals by the Huron Consulting Group, which the college hired for its Efficiency and Affordability Review.

Rochon said the college has identified the most promising areas for planning, but that the specific details of the plan are yet to be determined.

“I was very transparent with the campus community in indicating that in the coming four years, we are going to focus on certain things,” he said. “And sometimes, when you are very transparent, you are then asked, ‘Will you have an answer tomorrow?’ It just is not that kind of thing. It’s a longer-term endeavor.”

Explaining the college’s future plans for employees, the president said he does not anticipate a salary freeze within the next five years. He also said though staff layoffs are not a part of the plan, they would be a last resort.

“[Our plan is] to take advantage of resignation, retirement, staff training and promotion opportunities to shape the organization,” he said. “We cannot guarantee that those four things will be sufficient to give us all of the flexibility or all of the openings we need. So as is true of every single organization across the planet, it is entirely possible that we would have to resort — as a last resort — to involuntary severance or layoffs.”

Meanwhile, Rochon said he has received feedback about the Rochester PT Center closing from several students, most of whom were worried about how the decision affects their program.

“This is a positive development, not a compromise,” Rochon said. “And it is not primarily a cost-saving move … When we are somewhere else — such as Los Angeles or New York or London — we are there for a specific reason, about opportunities that exist there. We were in Rochester because we couldn’t do it in Ithaca 20 years ago. That is no longer true.”

Cedrick-Michael Simmons, president of the Student Government Association, also said many students were worried about this decision, which was announced in June.

Simmons also said the SGA hopes to speak to the administration about transparency and student access to the All-College Meeting.

“Excluding students and student journalists from that meeting only perpetuates misinformation being shared,” he said.

Rochon sent out a summary of these decisions to students via email Wednesday, almost one week after they were announced to faculty and staff. He said while he agreed students should be informed about the administration’s decisions, the All-College Meeting is a platform for all staff and faculty to come together.

“However, I completely understand the point that students should also be informed about the directions of the college,” Rochon said. “So, I will be meeting with the SGA — I believe in September — to talk about these directions and what they mean for students.”