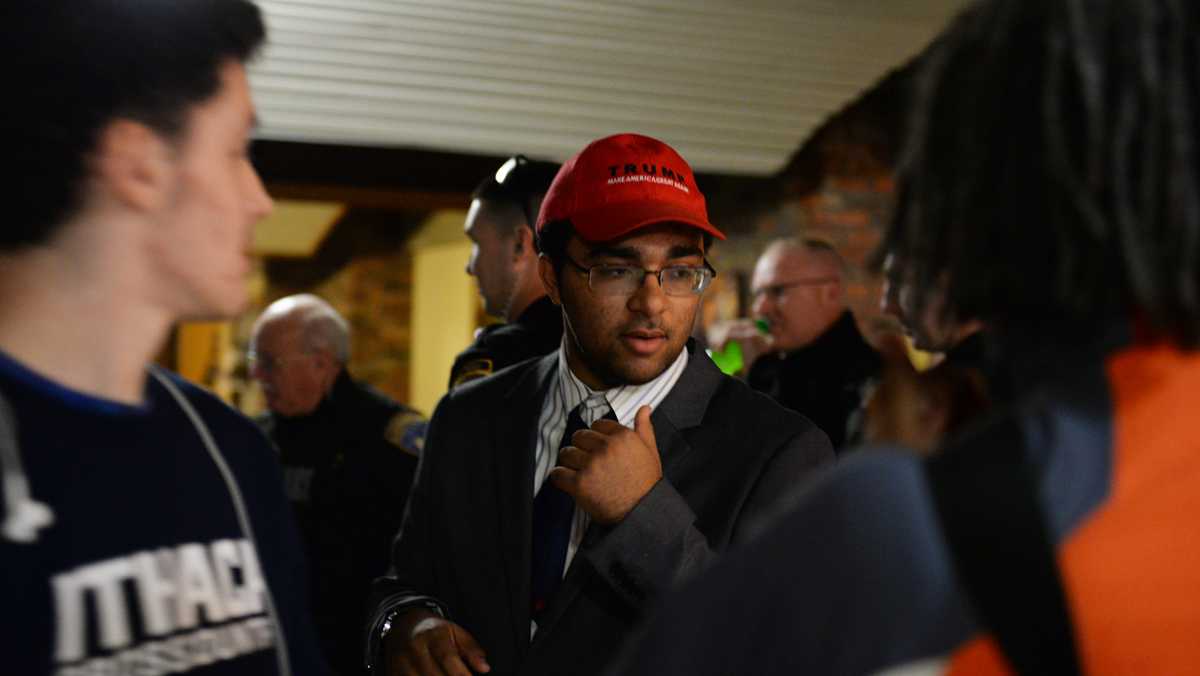 Sam Fuller/The Ithacan
Senior Caleb Slater, President of the Ithaca College Republicans, walks through the crowd before a previous speaker event. Slater was one of the main organizers of the Milo Yiannopoulos event.
By Grace Elletson — Staff Writer
Published: April 25, 2018

Yiannopoulos, speaker, writer, media personality and known figure of the alt-right, was invited to speak at the college by the two clubs to have an “intellectual debate” with a faculty member about political issues. The administration prevented the event from going through, citing security concerns.

The clubs invited Yiannopoulos to campus at the beginning of the semester, and funding for the event was approved by the Student Governance Council Appropriations Committee. The administration then stepped in, and by mid-March, it decided the event was too risky to host.

Senior Caleb Slater, president of IC Republicans, said that he thinks the administration’s decision to prevent the event from occurring is unreasonable. Junior Lucas Veca, president of IC Young Americans for Liberty, declined to comment. Slater said he wanted Yiannopoulos to speak on campus so students could hear credible arguments about social issues from a conservative’s perspective.

Slater said that he does not believe that violence would have erupted at the college if Yiannopoulos spoke because the event would have been open to only the college community. Also, because there are no historical precedents of protests turning violent when controversial speakers have been brought to campus, he said. He pointed to past student protests against speaker Larry Pratt, advocate for gun rights, and former college President Tom Rochon, who was protested heavily by students over concerns about the mishandling of racism on campus. All protests were peaceful.

Rosanna Ferro, vice president for the Division of Student Affairs and Campus Life, said it took weeks of conversations between the administration and the clubs to determine that it would be too unsafe to bring Yiannopoulos to campus. In mid-March, she said, the administration made its decision to not allow him to speak. She said that due to the past protests that turned violent, the college did not want to risk the safety of the community to host Yiannopoulos. IC Republicans and IC Young Americans for Liberty offered to hold the event off campus, Slater said. Ferro said the college would be unable to hold the event off campus because the threat would still remain.

“It would have had the same impact as far as safety, and it would be impacting the larger Ithaca community,” Ferro said. “We want our students to understand that we are a college within a city. This is where people live, and so we have to be thoughtful about the folks that we’re inviting to our space.”

Bill Kerry, director of the Office of Public Safety and Emergency Management, said at past events held by IC Young Americans for Liberty and IC Republicans, Public Safety worked with the clubs to provide adequate security when protests occurred. But bringing Yiannopoulos to campus was too risky, he said.

“This is a situation where it met a threshold that we did not feel was worth the risk for the safety of our community,” Kerry said.

Junior Carlie McClinsey, president of the SGC, said she agreed with the administration’s decision to not allow Yiannopoulos to come to campus. She said that because the event would have been the first time Yiannopoulos visited this part of the state, the event could have drawn people from all over the region and from different backgrounds and ideologies, which could have created a clash.

Colleges across the country have been determining how to deal with the potential threat of controversial speakers while also allowing freedom of expression. The college is also in the process of drafting its own official free speech policy. Adam Steinbaugh, senior program officer of the Foundation for Individual Rights in Education, said he is concerned that the college is using generalized security threats to prevent Yiannopoulos from coming to campus. He said that because no credible threat was detected concerning the event, the administration could be using security as an excuse to limit freedom of speech it finds objectionable.

Steinbaugh said that administrators have the right to take into account safety concerns but that there has been a number of other events Yiannopoulos has spoken at where protests did not turn violent.

“Other people behaving violently in other places a year ago — that is not a speech–protective response,” Steinbaugh said.

Ferro said the decision to prevent the event from occurring on campus had nothing to do with Yiannopoulos’ controversial talking points. She said the college has supported controversial speakers in the past and will continue to do so as long as the community can be kept secure.

“This wasn’t ever a discussion about the content,” Ferro said.