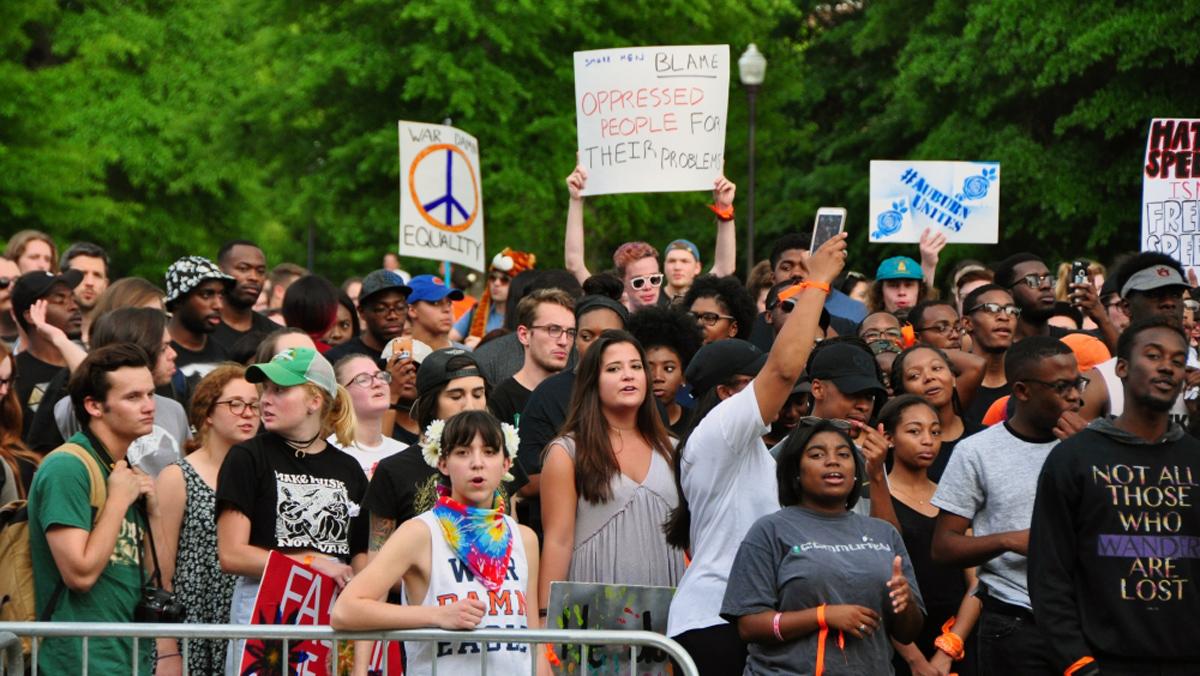 Inviting controversial right-wing figures to speak on college campuses has becoming more popular. This trend has caused students to protest their ideas, sometimes violently, which has forced some colleges to create policies to handle theses issues.

Colleges around the country have been facing protests and riots when they scheduled right-wing writers, speakers and politicians with opinions that strongly differ from those of some of the college’s students. In March, Charles Murray, American Institute scholar and author of controversial book “The Bell Curve,” caused student protests at Middlebury College. His speech was protested by students because he had argued that low socioeconomic standing was due to intellectual and racial inferiority. This incident is only one of many that have sprung up at colleges across the country.

Due to the rise of free speech issues on campus, many colleges have had to define why a controversial speaker would be disinvited from campus. Rory Rothman, associate provost for student life, said the college’s student handbook addresses students’ rights to freedom of expression.

“The Ithaca College community supports freedom of expression and diversity of perspective,” Rothman said. “I do not believe that there is a need for any additional policy, as we already have well-articulated policies in the Student Conduct Code Statement of Rights and Freedoms and Statement of Responsibilities sections.”

According to the Freedom of Expression section of the Student Conduct Code, “Students and student organizations are free, publicly and privately, to hold discussions, pass resolutions, distribute leaflets, circulate petitions, and take other orderly action that does not disrupt the essential operation of the institution.”

Cornell University also has a policy that designates how speakers, even those with ideologies disagreed upon by students, should be respected on campus. Students are allowed to picket the speaker peacefully, hand out leaflets and ask the speaker pointed questions, but they are not allowed to interrupt the speaker so that they cannot be heard.

According to the conduct code, “To curb speech on the grounds that an invited speaker is noxious, that a cause is evil, or that such ideas will offend some listeners is therefore inconsistent with a university’s purpose. … Once members of the university community extend an invitation [to a speaker], others may not disrupt the speech on the grounds that they find it stupid, immoral, or dangerous.”

If a controversial speaker were brought to the college, Rothman said, the college would make a decision about whether or not to let that person remain to speak at the college on a case-by-case basis.

“Ithaca College is aware of the issues that have arisen surrounding safety of events at other campuses across the country,” Rothman said. “Whenever there is a potential security concern, the college assesses the risk and makes a decision that is in the best interests of the institution and the safety of all members of the community.”

Recently, no one considered controversial has been invited to speak at the college. The Ithaca College Republicans have steered clear of inviting controversial speakers. For example, Bob Inglis, a former Republican congressman who is now advocating for a conservative solution to climate change, appeared in Fall 2016.

David Heffernan ’17 was the previous president of the Young Americans For Liberty chapter at the college. He said the club attempted to bring Milo Yiannopoulos, the right-wing provocateur who has been protested at many colleges in the past, but didn’t due to expected backlash.

Cornell University has run into similar issues like those that arose at Middlebury. When conservative politician Rick Santorum spoke at the university in 2016, he was constantly interrupted by hecklers. Newt Gingrich, former speaker of the house, also spoke at Cornell this past March. While his speech was not interrupted, he was still met by protestors at the beginning of the event.

Texas A&M University changed its speaker policies due to protests following an appearance by white nationalist Richard Spencer at the university in December. The event was sponsored by a private citizen, who paid $3,000 for the venue to host Spencer, according to The New York Times. Therefore, the university changed its policy so that only a Texas A&M student, administrative unit or system member can sponsor speakers at the institution.

Rothman said assessments are made on a case-by-case basis and that he couldn’t speculate on how the college might react to any particular circumstance.

President Shirley M. Collado addressed this issue at a student press conference held Aug. 29. While she did not take a firm position on whether controversial speakers should be allowed at the college or not, she did encourage students to have effective dialogues about issues they may disagree upon.

“If a student organization wants to bring someone to campus that we think could compromise any form of safety for folks on campus… that’s something we should think about and talk about,” Collado said.

Junior Lucas Veca, activism chair officer for the Young Americans for Liberty Ithaca chapter, said that he personally believes that if places of higher education are going to do what they are meant to do, points of view cannot be limited in any way.

“I think that if colleges and institutions are going to be true to their word about educating people and making people better individuals for our society, they cannot limit opinions,” Veca said.

Veca said the Young Americans for Liberty chapter is not currently planning on bringing any speakers to campus.