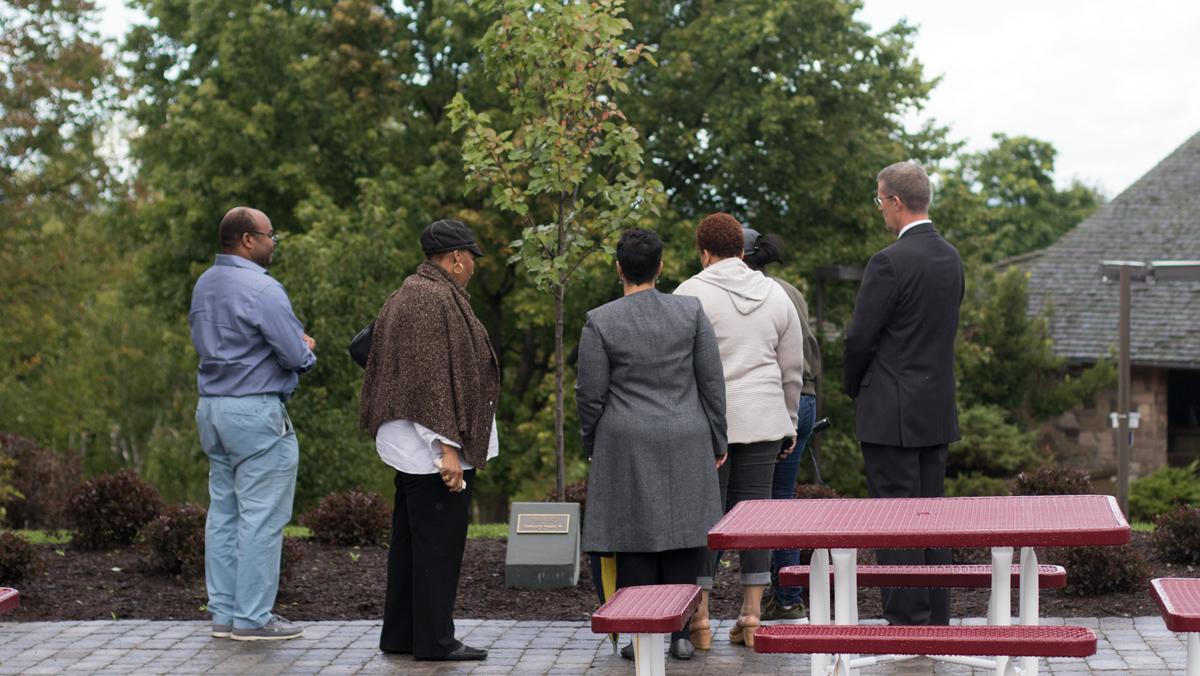 Sam Fuller/The Ithacan
Those who attended the remembrance gathering took time to relfect at the plaque and tree erected outside of the Dorothy D. and Roy H. Park Center for Business and Sustainable Enterprise building in memory of former student Anthony Nazaire.
By Grace Elletson — News Editor
Published: September 11, 2017

It was raining. A crowd of approximately 100 students, faculty and staff were tucked under a white tent; the rest scattered around it with umbrellas. But when Sean Reid, dean of the business school, walked up to the microphone to commemorate the life of Anthony Nazaire, the former Ithaca College student who was killed Aug. 28, 2016, rays of sun began to shine.

“It’s hard to believe it’s been a year already since his tragic loss,” Reid said.

Reid was the first speaker at the remembrance gathering held Sept. 8 outside the Dorothy D. and Roy H. Park Center for Business and Sustainable Enterprise. The gathering was held to commemorate Nazaire, who was stabbed and killed after leaving a party at Cornell University, and to unveil a plaque and pear tree that were erected in his memory. Nagee Green, the man on trial for the murder of Nazaire, was convicted in June for second-degree assault but the jury deadlocked on the murder charge. A retrial will be held this fall to settle the murder charge. Jury selection for the retrial is scheduled for Sept. 15.

Reid said the placement of the plaque and tree was closest to the two classrooms in the Business School where Nazaire spent the most time. One was the student organization room. The other was Business 206, where Nazaire took a class with one of his favorite professors, Don Lifton, who died Dec. 5, 2015. The plaque was also placed near the Muller Chapel, where students of different faiths hold religious ceremonies.

“I hope any student, of faith or not of faith, will walk down that path toward the chapel and say a prayer or that they’ll think of Anthony and remember him in their thoughts,” Reid said.

RahK Lash, assistant director in the Office of Student Engagement and Multicultural Affairs, spoke next. He remembered that the last time he had a conversation with Nazaire, they discussed his leadership role on the executive board of Brothers 4 Brothers, a student organization dedicated to providing a safe space and support system for marginalized men on campus.

“Anthony and I had a very, very deep conversation about his goals and his aspirations and his ambitions,” Lash said. “I didn’t know that was the last time I would actually get to see Ant.”

Lash said Nazaire was ambitious, inquisitive and projecting for success.

“Anthony was that dream of tomorrow,” Lash said.

Nazaire’s legacy, Lash said, would live on through other students of color with similar aspirations through the Anthony Nazaire ’19 Endowed Scholarship. Sophomore Christopher Ford, the first recipient of the scholarship, attended the ceremony to accept a plaque given to him in honor of Nazaire’s life.

Nathaniel Gonzalez ’17 also spoke at the gathering, reflecting on the day he and his friends became aware of Nazaire’s death. He said he remembered how dedicated the college community was to helping them heal and come to terms with the loss of their friend.

“In the past year, this campus has shown how strong it is and what it’s capable of,” Gonzalez said. “This community of color has shown just how strong it is. I can’t put into words how thankful I am for that.”

After the remembrance gathering, Ford expressed how grateful he was for receiving the the scholarship and that while he did not know Nazaire personally, he feels connected to him through the award.

Ford is a member of the the National Association of Black Accountants and is on the executive board of Brothers 4 Brothers. He said he is trying to be as ambitious as he has heard Nazaire was.

“We didn’t know each other, but we were going to have each others backs regardless just because we were black men trying to succeed,” Ford said.

Ford described himself as a religious man, and when he received the scholarship, he said he saw it as a blessing. He said since receiving the award, he prays more, and said he plans to visit the plaque honoring Nazaire often, just to talk to him and be thankful.

“Just from hearing different stories from people, they explained to me just the kind of person that he was,” Ford said. “And I definitely do wish I was able to meet him because…we would have instantly clicked.”

Update on the Nagee Green trial

Jury selection for the Green retrial will be taking place Sept 15.

The prosecution presented eyewitness accounts, Green’s interogation video conducted by police, videotape of the encounter and expert testimony, according to court documents. Videotape evidence shows Green brandishing a knife and appears to show Green running toward Nazaire and the other Ithaca College student wounded in the encounter with the knife extended.

They were then involved in a “confusing encounter lasting a matter of seconds,” after which Green fled the scene and Nazaire and the other student remained behind, suffering stab wounds. But no eye witness described the precise details of the stabbings and the stabbings were not captured on videotape presented at the trial, according to the documents.

The prosecution presented a tape of Green’s confession to police at the trial.  Green’s attorneys filed a motion in January to have the confession that Green made during an interview with the New York State Police suppressed. They said investigators lied and used “mind games” with Green, saying they had a video of him stabbing Nazaire. According to court documents, the defense argued that the police “utilize discredited techniques to get the defendant to make damaging, albeit vague and indefinite, statements.”

Joseph Joch, a criminal defense attorney who is representing Green, said he expects the prosecution to change their strategy and possibly present new evidence in the second trial. Matthew Van Houten, the Tompkins County district attorney, declined to comment about the upcoming retrial.

Joch also said the first jury was primarily made up of professors and others from the academic community, since many from that field are deferred for jury duty to the summer. He said a different makeup of jurors from different backgrounds could also change the outcome of the case.

While Joch said he wants the college community to find justice for the death of Nazaire, he maintains that his client is innocent.

“Their first devotion should be to justice, not just to seek retribution, because retribution often picks out the wrong culprit,” Joch said.

CORRECTION: An earlier version of this story said Christopher Ford was a freshman. It has been corrected to state that he is a sophomore.