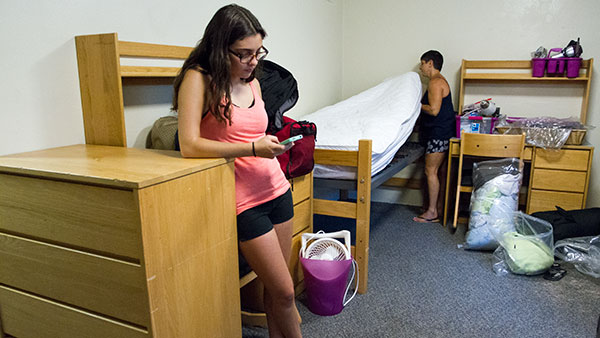 When it comes to college students, parental involvement isn’t anything new.

On the morning of Aug. 24, Ithaca College was teeming with minivans packed to the brim and students and parents ready for Move-In Day. Lynn Veltri, the mother of incoming freshman Nicole Veltri, was open about how involved she was planning to be with her daughter, especially academically. She said she will be checking HomerConnect and communicating with her daughter about test and class grades.

“I’m paying for her college, so I should have 100 percent involvement,” Veltri said.

Nicole Veltri said she has no problem with her mom being involved within her academic life. She said she agrees that her mom is paying for her tuition and therefore should have access to this information.

What some may refer to as “helicopter parenting,” others might simply call “caring,” but the trend — parents actively taking part in students’ lives whether it be decision-making or grades — is the new norm, and colleges are following suit.

Brian Scholten, director of the Office of the Registrar, said the college is currently working on an online program where students and parents can interact, and parents can keep up with all of their child’s academic information without having to contact professors or administrators. He said the program, which is temporarily named “Parent Portal,” should be up and running by the Spring 2015 semester.

With HomerConnect, it’s up to the student to give their parent the login information to get through to the site. However, through this new website, Scholten said, the parent has access to this account’s information, without having to go through the student. Parents can view the student’s grades, class schedule and billing statement, and the student can decide for how long this information can be viewable. He said parents will be notified via email after the student submits the information about the parent to the site, and in this email there will be instructions on how to log onto the site.

“It is the student’s record and this is a means to giving the student more control over who has access to their information,” Scholten said. “In a way it makes them more responsible and it encourages communication between the parents and students, rather than the parents and administrators.”

Scholten said each institution creates its own policies in regard to FERPA. The college’s policies state that if a student states he or she is a dependent — meaning he or she does not pay federal taxes — the parents are entitled to their child’s academic records as long as the parents can confirm their relationship to the student.

There have been a handful of incidents with parents requesting information about how their child is doing academically, Scholten said. This can sometimes put faculty in an awkward position, he said, because either they don’t have the ability to give that information, or they don’t have the proper forms of identification from the parent.

Stephen Clancy, an art history professor at the college, said parental involvement within the student’s academic life has increased dramatically since he was in school. He said parents looking to help raise their child’s grade have contacted him on several occasions, speaking on their child’s behalf.

“I think parents have really come to see college less as an opportunity for their kids to grow, learn, experiment, develop interests, become full human beings on their own, and more as a kind of contract between them and the institution,” Clancy said. “As a result, when they feel that it’s not happening as they envisioned it, they get personally involved in making sure that contract is carried out.”

Parents are not the only ones taking on helicopter characteristics, Steven Conn, a professor and director of the public-history program at Ohio State University, said. He recounted in his article, “The Rise of the Helicopter Teacher,” that when one particular student called out the fact that he had no rubric for the class, Conn said he saw no reason to have one. He said the creation of a rubric would have brought him one step closer to becoming a helicopter teacher: a teacher who mimics the behaviors of an overly involved parent.

Conn said without enough guidance and direction, students fear the thought of doing an assignment on their own and getting B or C. He also said grade inflation is becoming a recurring theme because too many professors are afraid to watch their students fail.

Clancy said some professors at the college provide detailed syllabi that are up to 15–20 pages long, at the request of more clarification from the students. He said he finds that more often students, especially first-year students, need to be told when to take notes and what to do instead of taking the initiative.

“I remember my physics lab,” Clancy said. “You were given the lab and the material and there was a lab assistant wandering around, but I had to figure a lot of it out myself, and it caused me angst and all sorts of things. It really also forced me to start to think for myself in ways that I hadn’t really ever had to do in physics in high school, where everything was very carefully controlled.”

Ithaca College psychology professor Cyndy Scheibe said she has received calls from several parents asking about their son or daughter’s grades and from others trying to talk her out of giving a certain grade. She said much of this involvement comes from having cell phones and social media.

“It’s easier through email, through Facebook, through all different kinds of communication that weren’t the case when I was in college. I think that’s made a difference,” Scheibe said.

Scheibe also said parents could be very involved in their child’s life because sometimes they worry about their child’s safety after hearing negative stories on the news, or because they don’t want their child to ever feel disappointed.

A study in the Journal of Child and Family Studies entitled “Helping or Hovering? The Effects of Helicopter Parenting on College Students’ Well-Being” claimed that college students with over-controlling parents were more likely to be less satisfied with their lives and more depressed.

Miriam Liss, professor of psychology at the University of Mary Washington and co-author of the study, said parents can be involved in their child’s life, but only to an extent.

“Helicopter parenting is a more intrusive and extreme style of parenting,” Liss said. “You can still be available when your child needs you, but not get too involved in their lives.”

In some cases, parents don’t become involved so much academically, as they are more interested in their child’s social life and hearing from them on a day-to-day basis. Freshman Nicole Bond said her parents weren’t really involved in the admission process, aside from the financial help she received from them. However, she said she still speaks with them daily and her relationship with her parents has grown since she left for college.

“I definitely talk to them a lot more now,” Bond said. “We usually talk about how everyone in the family is doing and sometimes we just talk about my class and how things are going. We cover a variety of things.”

Liss said in prior research she found that parents who have been appropriately involved within their child’s life create a more supportive environment, which encourages more independence. She said these students usually have better grades and show higher levels of confidence and increased personal and social development.

Sophomore Liza Foley said her parents are very involved in her academic life while at school by making sure she is always keeping up with credits and good grades. While she said she does feel a little bit pressured by their high expectations, she knows that it pushes her to do well academically.

“They keep me focused and on the right track,” Foley said. “I have no room to mess up because they will be right there watching.”