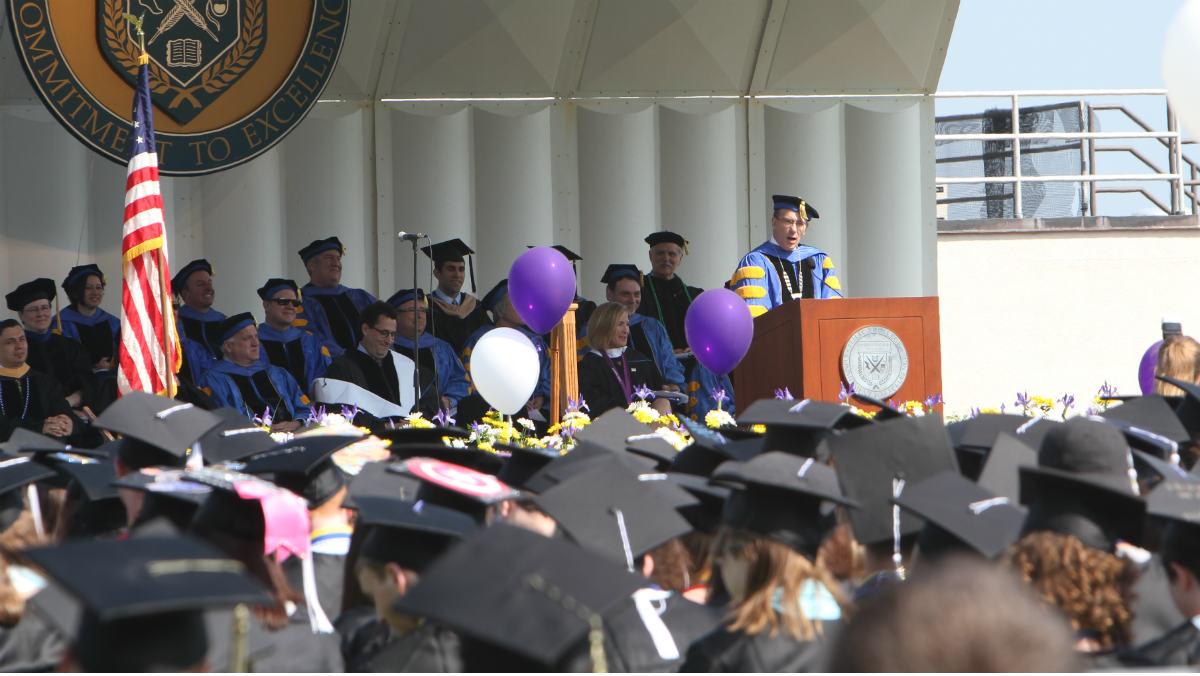 Max Gillian/The Ithacan
Ithaca College President Tom Rochon addresses members of the class of 2015 at Commencement on May 17.
By Max Denning — Assistant News Editor
Published: May 17, 2015

The Ithaca College Class of 2015 graduated in the college’s 120th Commencement ceremony May 17 at Butterfield Stadium.

After the graduates processed into the ceremony, Linda Petrosino, interim provost and vice president for educational affairs, thanked the Class of 2015 and presented Kushner with an honorary degree. Kushner likened himself to a fictional character at the college who has not fully experienced the trials of an educational experience, but said he was still very thankful for the honorary degree.

Kushner, who received the National Medal of Arts from President Barack Obama in 2013, listed off a number of issues he saw with the present state of the world, including homophobia, economic inequality and the conflicts in the Middle East, and he charged the graduates with saving it.

“The world needs saving, so enjoy today … but then get back to work,” he said. 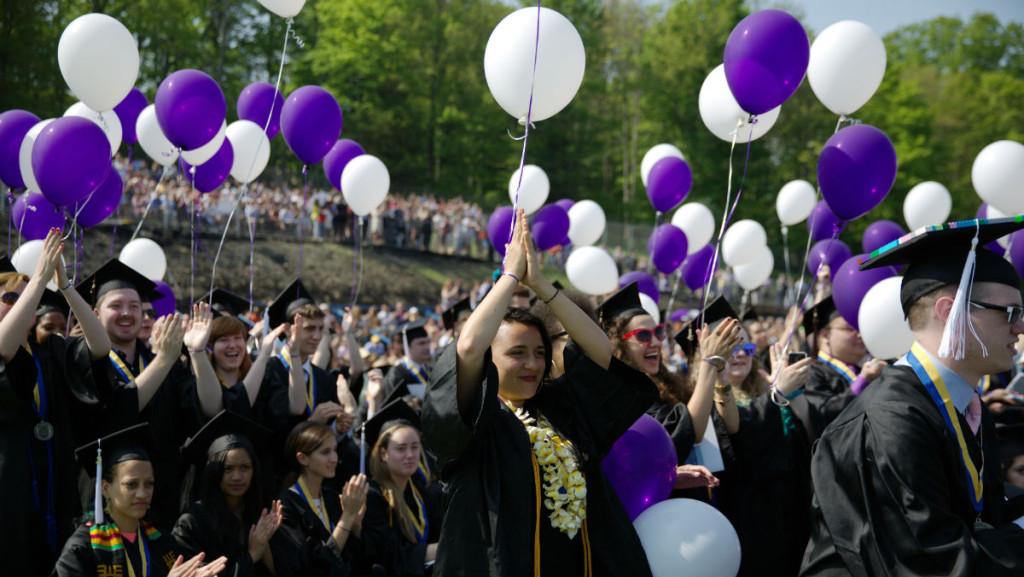 Members of the class of 2015 celebrate Commencement on May 17. Jimmy Wang/The Ithacan

Rochon gave his remarks to the graduates, where he compared the graduates’ time at the college to the famous Greek epic “The Odyssey,” in which Greek war hero Odysseus travels from Troy back to the Greek island of Ithaca.

“I know your time here at IC was less terrifying, but I hope it was equally as rich,” he said.

Rochon ended his address by referencing the quote engraved on a medal each of the graduates wore, which read, “I hope your journey is a long one, full of adventure, full of discovery,” quoted from 19th-century Greek poet Constantine P. Cavafy’s poem “Ithaka.”

He then introduced Musnicki, who issued the graduates four challenges. She challenged the graduates to set a goal and make a plan but be willing to change it, to fail a lot and fail forward, to exercise gratitude often in their lives and be grateful for their privileges, and to be present in the moment.

After issuing her last challenge, Musnicki asked the graduates to sit in silence for 30 seconds to reflect on the moment.

O’Brien gave the senior class address. Her speech centered around looking and thinking above smaller, petty issues. O’Brien invited the graduates, and many of the other audience members, to stand on their seats.

“You have now graduated higher than anyone else at Ithaca College,” she said.

Five hundred and sixty-nine of the 1,398 graduates, or almost 41 percent, donated to the Ithaca College Annual Fund as a part of the senior class gift. Stephanie Khoury and Hannah Oppenheim, Senior Class Gift Committee co-chairs, presented the gift of $14,163 in the form of a large check to Thomas Grape, chair of the Ithaca College Board of Trustees.

Graduating seniors to see best job market since before recession