Construction of apartment complex under way 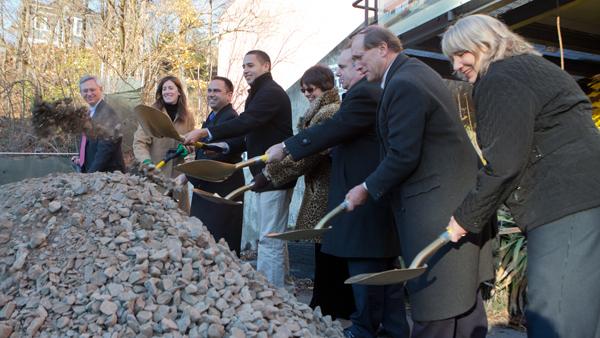 Durst Breneiser
Organizers take part in the groundbreaking ceremony for Seneca Way on Wednesday. The 56,000 feet apartment complex will be located at the base of East Hill.
By Hayleigh Gowans — Staff Writer
Published: November 16, 2012

Seneca Way, a six-story apartment complex that will hold parking and office space downtown, began construction Wednesday with expectations that it will be completed by December 2013.

The project was unveiled at a groundbreaking ceremony on its site located at Seneca Way and East State Street, at the base of East Hill.

Seneca Way will include 38 apartments total, with room for office space. The lower level of the building includes a secured, covered parking garage and a fitness center.

Bryan Warren, president of Warren Real Estate, said he became interested in developing plans for an apartment complex when he noticed there was a growing interest in urban apartment living in Ithaca, but few housing options were available downtown. Warren said he has seen a trend of people wanting to live closer to where they work and shops, rather than living in houses surrounding the city.

“It’s a popular type of lifestyle that’s really taken hold and really taken off,” Warren said. “Urban living just seems to be the way people are preferring to live these days.”

The site of the complex is currently where the unoccupied Challenge Industry building is located. On Nov. 26, demolition will begin on the building to make room for the Seneca Way apartments.

Warren said the expected cost of the project is not clear at this point.

Phyllisa DeSarno, deputy director for economic development for the City of Ithaca, said the complex is important for adding downtown living opportunities.

“It’s a project I think that helps advance the downtown strategic plan, because it provides both new housing and new office space,” Ferguson said. “[It] will really change the dynamics in downtown, making it a lot more vibrant and lively place.”