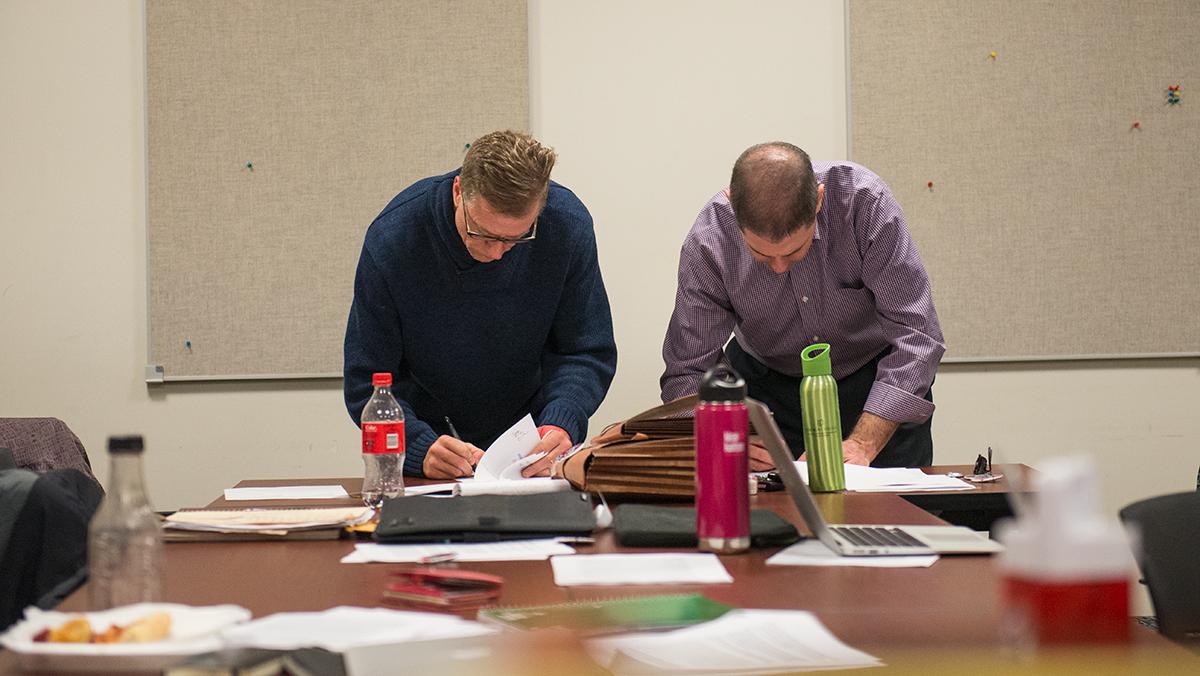 Sam Fuller/The Ithacan
From left, John Longtin, an SEIU representative, and Pete Jones, the administration’s lawyer, sign a union contract March 26, 2017. The Ithaca College Contingent Faculty Union has recently raised concerns that the college is not abiding by the contract it signed in Spring 2017.
By Madison Fernandez — News Editor
Published: April 17, 2019

The Ithaca College Contingent Faculty Union is raising concerns that the college is not abiding by the contract the union and the administration finalized April 2017.

Guilherme Costa, vice president of legal affairs at the college, said via email that the only comment he has on this topic is that the college follows the terms of the bargaining agreement, including the provisions regarding appointments. Marc Israel, assistant provost of finance and administrative operations, also declined to comment because he cannot discuss the details of faculty contracts.

Rachel Fomalhaut, chair of the union and lecturer in the Department of Writing, said the union is concerned that Article 22, Section O, is being violated in some cases of faculty not being reappointed. The section states, “After three years of faculty reappointment, if the position is discontinued, the College will not replace the position with two or more part time positions.” Section L explains that this is only permissible if there is a valid operational need but that budgetary considerations cannot be the only need.

She said this section was put in place to ensure that contingent faculty members have job security after they have achieved some seniority as consistent educators at the college. She said the union views part-time faculty members as only being used to replace an individual who is going on sabbatical or medical leave or to teach a specialized class that no one can, not to replace a full-time faculty member to save money. According to the American Association of University Professors, over 70 percent of professors nationwide are not on the tenure track. According to a study in the journal International Higher Education, the proportion of faculty who teach part-time nationwide has doubled in the last thirty years because part-time appointments are less expensive. There were 246 part-time faculty members at the college in Fall 2018.

Fomalhaut said many of the contingent faculty members switch between part-time and full-time work while at the college, a situation that could complicate the clause. Thus, Article 22, Section A defines seniority in terms of how many classes are taught, so eight part–time courses equal one year of seniority. Fomalhaut said that for some of the individuals who are not having their contracts renewed, they have the combined three years of seniority between full-time and part-time work.

Fomalhaut said many of these faculty members teach vital classes, like those in the Integrative Core Curriculum. She said there would have to be a drastic reduction in enrollment in Fall 2019 in order for those classes not to be in demand at a full-time load level. The college is already planning to make budget cuts due to projected lower enrollment.

Graham said these individuals who are not having their contracts renewed include faculty members across departments who have been teaching at the college for many years.

“At first, it was one person here, one person there,” Graham said. “As more reports started rolling in, we started to get more concerned. … We do know that there are many people across departments that are basically losing their jobs or, at most, being offered part-time work next year.”

When some contingent faculty members did not have their contracts renewed, they were not given an explicit reason as to why, Graham said. Graham said that the point of the bargaining agreement was to ensure that all contingent faculty members know if they have a job or not with a reasonable amount of time before the next academic year begins, which is why the March 1 deadline was established. However, the notice of nonrenewal does not always necessarily mean that the individual is not being rehired; rather, it may mean that the department has not yet figured out if the individual will be needed, so it is possible that the job will be offered later.

An email was sent to those who have not had their contracts renewed in the School of Humanities and Sciences, which states that “At this point in time the college’s faculty staffing needs for academic year 19-20 are not yet fully known. However, per the SEIU Local 200 United Union agreement with Ithaca College, Article 22, Section M, ‘a decision to appoint a faculty member to a successive term appointment will be assessed and communicated by March 1 if known.’ Therefore, this letter serves as notice of non-appointment to a one year position for academic year 19-20. As noted in the opening sentence, all of our needs are not yet apparent so there may be opportunities that become available after this March 1st communication timeframe.”

Tom Swensen, professor and chair of the Department of Exercise and Sport Sciences and chair of the Faculty Council, said these nonrenewals could be a result of graduating a large class and requiring fewer class sections because of that.

“The college probably won’t offer a section for just a few people in order to keep people employed, even though that would seem like the humane thing to do,” Swensen said.

Swensen said that if the size of the incoming freshman class exceeds the expectations of the projected enrollment, he anticipates that some of the contingent faculty members will be offered their positions again.

Herb Childress, author of “The Adjunct Underclass: How America’s Colleges Betrayed Their Faculty, Their Students, and Their Mission,” said that faculty members working course by course have no reliable income because their positions are based on enrollment, a decision that could change with extremely short notice.

“That’s not intended as abuse,” Childress said. “That’s simply a business decision that isn’t thinking that there’s a human being on the other end of it.”

Fomalhaut said the administration is in the process of providing specific information on how many full-time contingent faculty members are not having their contracts renewed. She also said the college has not provided a reason as to why these nonrenewals are happening.

Dan Barrow ’03, instructor in the Department of Computer Science, has been working at the college in a full-time and part-time capacity for the past 17 years. The college has not renewed his full-time contract, a position he has had for two years but has instead offered him a part-time position. He said he has received a notice of nonappointment in the past but was soon notified that his contract would be renewed for another year. Barrow said a part-time position is not financially viable, and he is not counting on the college to reach out to him with an offer for a multi-year contract.

“I can’t afford to,” Barrow said. “I would love to accept it. Teaching is what I love to do, but I have to give it up.”

Graham said she hopes to work with the college to figure out a solution that is best for all parties involved.

Correction: A previous version of this article misstated the number of contingent faculty members at the college. It has been corrected.