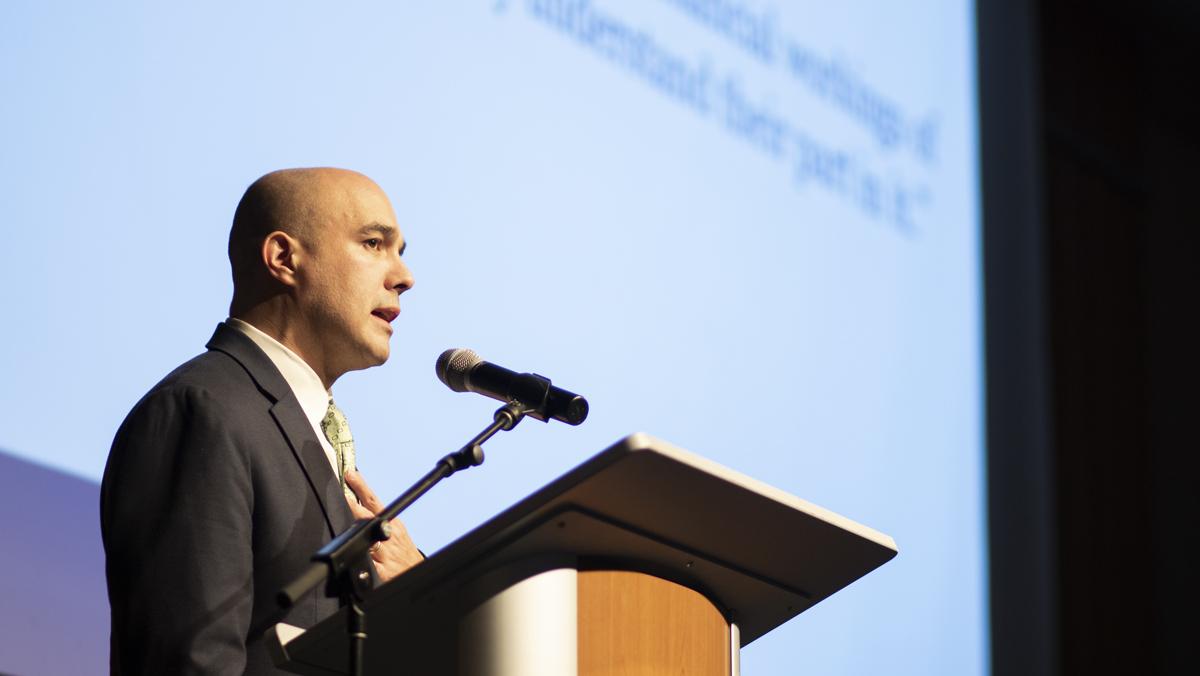 Departments across Ithaca College have been asked to cut their budgets in order to reallocate their funds to balance the budget for the 2019–20 fiscal year.

The cuts are being made in anticipation of a projected lower enrollment for next year. As a first step in ensuring that the college’s dollars are being used in efficient ways, the college has asked deans to look for soft targets, such as travel and supply expenses, to cut down on. William Guerrero, vice president for finance and administration, said these cuts are planned to be reallocated toward institutional priorities concerning students, faculty and staff, including increased expenses for faculty promotion, the strategic plan, resident assistant compensation, staff compensation and increases for annual salaries and wages. However, because admission numbers are not yet solidified, the budget and the anticipated cuts are subject to change as the May 1 deadline for enrollment at the college approaches. 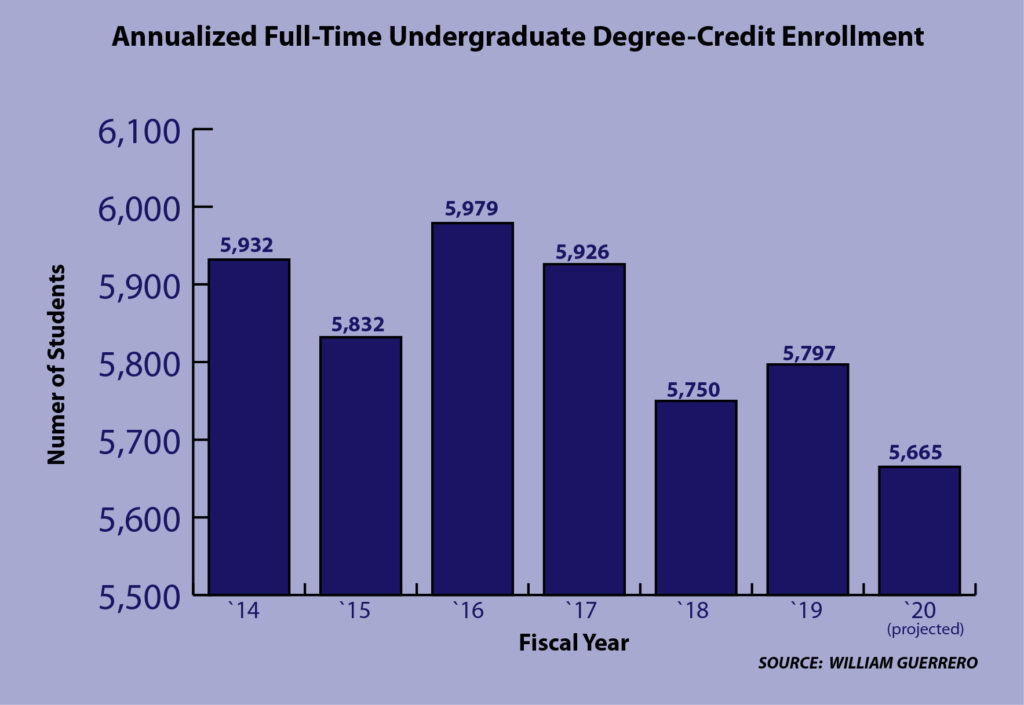 The Division of Finance and Administration has planned for approximately $1.4 million to be cut from academic affairs, affecting all schools across the college. The division also plans to reduce $1 million each from the college’s dining program and from Information Technology. The division has also asked that meals, travel and entertainment across departments at the college be cut down, but not by a specific dollar amount.

By reallocating the money to go toward these goals, Guerrero said, he wants the college to be student-centered, and thus, faculty-centered because faculty members aid student success.

These targets are based on the projected enrollment for the upcoming fiscal year. This is anticipated to be 5,665 students, a number that Guerrero presented at the Spring 2019 All–College Gathering held Feb. 6. Enrollment has been declining over the past five years. The projected enrollment for the 2019–20 fiscal year is the lowest in the past five years; in the 2015–16 fiscal year, the college had 5,979 students. Guerrero said there is a large graduating class this year, a situation that also contributes to the lower enrollment. Also contributing to the college’s precarious financial situation is its reliance on student revenue — 88 percent of the college’s operating budget is made up of student fees. If there are fewer students, there is less revenue as expenses continue to grow.

The exact numbers of total applications from prospective freshman students for the 2019–20 year have not been finalized yet. The deadline to apply to the college was Feb. 1.

This projected decline in enrollment is representative of national trends in higher education, especially in the Northeast. The National Student Clearinghouse Research Center found that there was a 1.3 percent decrease in enrollment in Spring 2018 compared to the previous spring. New York is the state with the largest college enrollment decline.

Additionally, as the college looks to increase financial aid and scholarships to attract prospective students by increasing the discount rate — the average portion of total tuition and fees that is covered for each student in the form of financial aid, which is 48.6 percent for undergraduates for the 2018–19 fiscal year — the college needs to cut back on other expenses to balance the budget, said Marc Israel, assistant provost of finance and administrative operations. Across the country, discount rates have continued to rise. The average discount rate for undergraduates in 2017–18 rose to an all-time high of about 44.8 percent, according to the National Association of College and University Business Officers.

The budget is only a draft, and these ranges for cuts may change depending on the finalized enrollment numbers, Guerrero said. The budget will be voted on during the May Ithaca College Board of Trustees meeting. The budget has historically been set to be approved in February, but because incoming freshman student deposits are due in May, much of the budget would be dependent on enrollment projections, which are not concrete, Israel said.

Guerrero also said a critical part of the budget is taking into account new sources that will increase revenue, such as the new MBA in entertainment management and increased promotion of summer programs.

Academic Affairs includes the five schools on campus, as well as other entities like international programs, the library, academic advising and the registrar. Israel said one way that expenses are being cut is by cutting budgets that are not fully used, such as travel.

“We want to make sure budgets are reflecting what we’re spending,” Israel said.

Israel said these soft areas are the first step to determining what else may need to be cut to balance the budget for the upcoming fiscal year.

“Once we determine where we stand in those areas, that will inform us what we have left to go,” Israel said. “I don’t think you’ll see any drastic changes in any one area. I think it’s going to be cumulative type of team effort to come up with the best areas to look at.”

The deans were not given a specific amount to cut from their budgets, but rather were asked to look at areas that have not been completely spent or could be covered by other funds, such as restricted accounts or endowed funds, said Diane Gayeski, dean of the Roy H. Park School of Communications. She said she thinks it is important that the college is looking to rebalance the budget so money can be allocated toward more targeted areas, such as critical repairs for facilities and adding resources in health, wellness and counseling.

Gayeski said she has seen worse budget cuts in the past, like when there were significant cuts to faculty lines and freezes on tenure in the early ’90s under former Ithaca College President James J. Whalen.

“None of those things are happening now,” she said. “I think, as far as what we’re seeing on the higher-ed landscape, this is not a reason for great alarm.”

Linda Petrosino, dean of the School of Health Sciences and Human Performance, said she was appreciative that the college did not give an exact amount for her to cut from her budget. She said the college is being proactive at looking at the budget to ensure that there are enough funds to add toward other priorities and ensure future success.

“I think I would be concerned if we weren’t asked to look at our budgets,” Petrosino said. “I’m really pleased where we are in terms of budgets. I know this sounds strange, but as a dean, I’m really pleased that the schools are being asked, ‘Look at your budgets and tell us what is priority and where we can maybe rebalance so we can put our money where we feel we want to.’”

Tom Swensen, professor and chair of the Department of Exercise and Sport Sciences and chair of the Faculty Council, said it is the economic reality of the college to have to shift budgets around. He said he thinks these changes could be positive in encouraging faculty and staff to think differently when planning their budgets for the future.

“It might open people to do things differently,” Swensen said. “We have a pattern of how we acted as a college, so this might make people break them out of a mold, and maybe we can try some other things. It’s exciting, but anything that’s exciting has that anxiety element. That’s where we’re at as an institution. Everybody’s hopeful.”

Israel said that as of right now he does not believe that salaries are on the line. Guerrero said that while an easy way to balance the budget would be to cut annual salary increases for faculty and staff, he will not do that because he is prioritizing employees. Gayeski said that another easy fix to balancing the budget would be to cut scholarship aid for students but that she is glad the college is committed to the retention of students.

Guerrero also said these smaller cuts across departments should be viewed as cumulative efforts rather than large cuts. He said entire programs or departments are not at risk of being cut.

Both Guerrero and Israel said the strategic plan, which is currently in the process of being developed, will help guide and prioritize where the college’s money should be reallocated in the future.