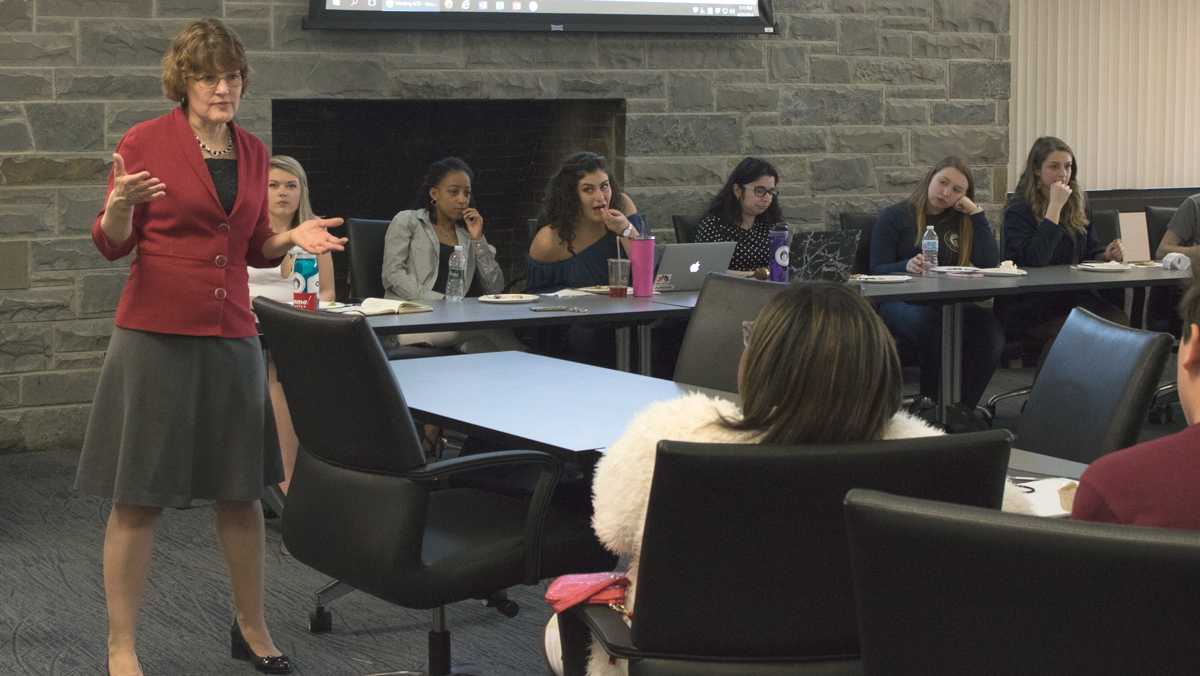 Caroline Brophy/The Ithacan
Bonnie Prunty, the recently appointed dean of students, spoke with the SGC about her goals in the newly created position at the April 23 meeting.
By Laura O'Brien — Staff Writer
Published: April 25, 2018

Bonnie Prunty, the recently appointed dean of students, presented her goals for the newly created position and asked about specific student concerns at the April 23 Student Governance Council meeting.

Prunty is currently the director of the Offices of Residential Life and Judicial Affairs and assistant dean for first-year experiences, and she will officially become the dean of students June 1. The re-creation of the position is the result of changes to the student affairs division announced in March 2018.

Prunty said she will be overseeing the Office of Residential Life and Judicial Affairs and the Case Management Office but will likely be working with other departments in the future as the specifics of the position are confirmed or altered.

One initiative Prunty plans to work on next academic year is streamlining the process of reporting issues that involve students, such as Title IX reports or bias-related reports. Currently, many of these reports must be brought to a variety of online portals or areas on campus, which can be confusing for students, Prunty said. She said she will be looking into creating a singular portal for all student-related reports.

In response to Prunty’s request for specific areas her position should focus on, junior Anna Gardner, SGC vice president of campus affairs, said increasing campus pride should be a priority. Gardner said the SGC executive board and Senate have looked into increasing school spirit but feel the dean of students will have the ability to improve this aspect of the college.

“I do think this position has a good opportunity to potentially take either events that already exist and make them more officially traditions of the college or make new events in general,” Gardner said.

Yetunde Smalls, Class of 2021 senator, asked Prunty about her plans to address recent issues with offensive vandalism on campus without infringing on the free speech of students.

Prunty said the prevalent and complex nature of this topic will require a well-researched policy solution. Prunty plans to study the best practices of other campuses and student codes of conduct developed by a national organization the Association for Student Conduct Administration.

“How do we take this really complicated issue and figure out how to find this right balance between giving students the right to free speech and to express their opinions … and then the other right of students not to be offended or subjected to whatever those messages are,” Prunty said. “I don’t have a perfect answer to that yet. It’s an issue that many campuses are struggling with, but when we usually try to find policy answers in a situation like this, there are a lot of different resources we can go to.”

Correction: A previous version of this article incorrectly stated that Bonnie Prunty will be Ithaca College’s first dean of students. The position of the dean of students previously existed at the college.