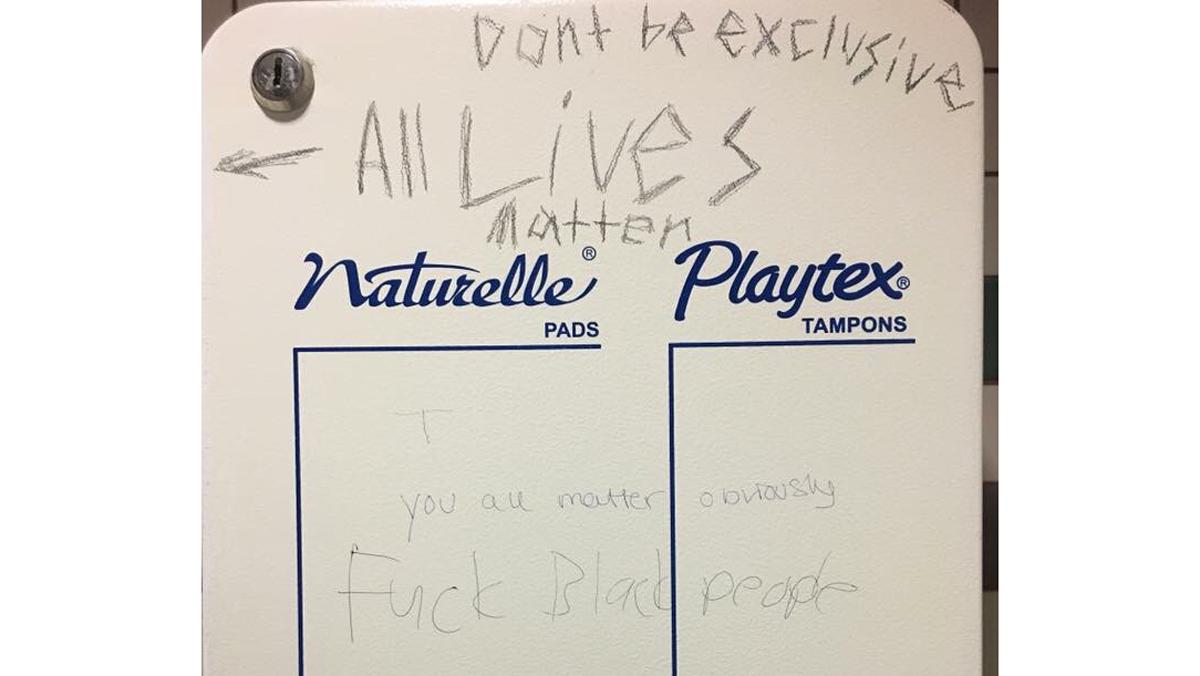 Racist language was found written in the gender-neutral bathroom at approximately 11 a.m. April 19 on the third floor of Williams Hall at Ithaca College.

Junior Talia Jean Weindling reported seeing the words “F— Black people” to the Office of Public Safety and Emergency Management, and she posted a picture of the scene on the Overheard at IC Facebook page. 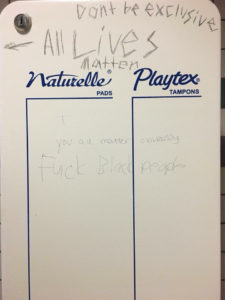 Thomas Dunn, lieutenant in the Office of Public Safety and Emergency Management, said Public Safety classified the incident as Making Graffiti under article 145.60 in the New York State Penal Law.

She said there was an original comment a few months ago in the bathroom that said, “Black Lives Matter.” When she was in the bathroom April 17, she said she noticed the words “Don’t be exclusive,” and “All lives matter” as well as “Blue lives matter,” but the words she saw April 19 had not yet been added.

“I know Ithaca as a very peaceful, loving, equal type of town, and I guess that’s why I applied to this school,” Weindling said. “I think that’s been changing and people have been more open, knowing that they can have more support in this type of red ideology.”

Organizations like Ushahidi and the Anti-Defamation League have been tracking an increase in hate crimes and harassment nationwide since the 2016 election.

Public Safety Lieutenant Thomas Dunn said Public Safety classified the incident as Making Graffiti under article 145.60 in the New York State Penal Law. For the incident to be classified as Hate Crime under New York State Penal Law, the incident needs to be a specified offense and there needs to be proof that the suspect’s motive was based on a “belief or perception regarding the race, color, national origin, ancestry, gender, religion, religious practice, age, disability or sexual orientation of a person, regardless of whether the belief or perception is correct,” according to the penal law.

“Public Safety understands and sympathizes with the feelings of our community and our community members,” Dunn said. “We are under the constraints of following the New York State statutes, how they are written and how you must apply those statutes.”

Rosanna Ferro, vice president for student affairs and campus life, wrote in a statement April 19 that the college is planning to release information regarding measures to address incidents like the graffiti in the Williams bathroom.

“Late this morning, I learned about the discovery of this graffiti, and along with additional recent incidents of anti-Semitic graffiti, these events have left me feeling heartsick,” Ferro said. “We will soon be sharing information with the campus community regarding our campus response and proactive measures to address these kinds of hateful incidents. I can assure you that we will neither ignore nor tolerate words or actions intended to denigrate or marginalize any individual or group.”

President Shirley M. Collado sent an email April 20 addressing the campus with more details on the campus’ plan for bias.

“We must remain committed — individually and collectively — to creating and nurturing a respectful, inclusive and equitable campus community that values and models full participation,” Collado said in the email.

The Bias Impact Response System is a new process to investigate bias- and discrimination-related issues. A Bias Impact Team will be established along with associated protocols for dealing with these incidents. Those who experience or witness bias will have the option of contacting offices or officials to report an incident and receive help.

Public Safety is continuing to investigate the incident and is asking the public for help in identifying the person or persons responsible. Anyone with information can call 607-274-3333 or leave an anonymous voicemail by calling 607-274-1060.