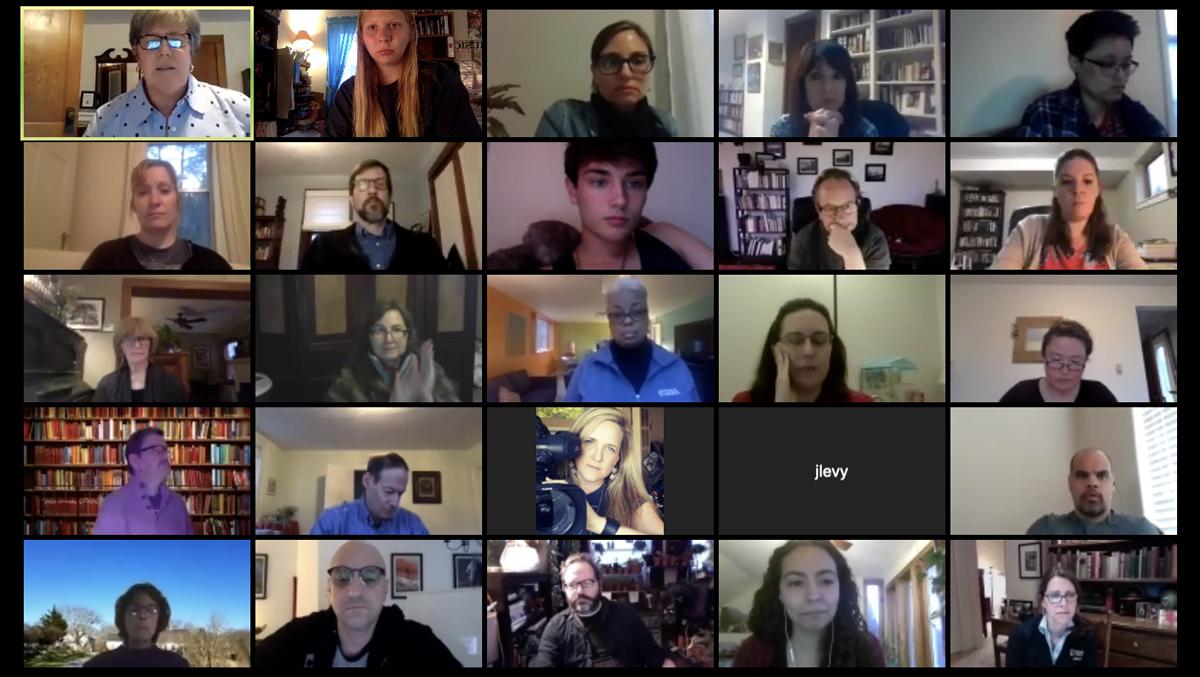 Ashley Stalnecker/The Ithacan
Members of the Ithaca College Faculty Council participated in its first meeting since moving to online learning because of the COVID-19 pandemic April 7.
By Ashley Stalnecker — Staff Writer
Published: April 8, 2020

“In this time of crisis, I could not in good conscience make two big hires when I know that there will be many faculty and staff who will suffer economic consequences as a result of decreased enrollment as a result of COVID-19,” Cornish said.

Janice Levy, professor in the Department of Media Arts, Sciences and Studies, said via the public chat function of the Zoom meeting that she did not understand Cornish’s rationale because the schools still need deans.

All candidates for the searches were notified of this change and remain interested in the dean positions at the college, Cornish said.

Jason Harrington, associate professor in the Department of Media Arts, Sciences and Studies, asked if the college will have to start over in the search process.

Cornish said that if the candidates are hired somewhere else, the college may have to restart the searches. Otherwise, she said, the searches will resume with the current candidates.

“We brought in excellent candidates in each school,” Cornish said. “It is my hope that when we resume, we will be able to extend offers to folks who are already in the top candidate pool to begin to be the dean to start in the Fall of ’21.”

Harrington said he is worried that the college will lose strong candidates if it postpones the searches.

“We really could have lost something really big here,” Harrington said.

However, Baruch Whitehead, associate professor in the Department of Music Education, said he thinks many people right now are nervous about moving to start a new job, especially in New York. New York has the most coronavirus cases in the United States with 140,081 cases as of April 7, according to The New York Times.

Phil Blackman, assistant professor in the Department of Accounting and Business Law, said the college was making a good decision to save money.

“Our responsibility is the curriculum,” Blackman said. “We need a curriculum that attracts students.”

Cornish answered the faculty members’ questions about proceeding during the COVID-19 pandemic for the first hour of the meeting.

Claire Gleitman, professor in the Department of English, asked if there was a timeline for when contingent faculty would learn whether or not they would be renewed for the fall semester.

Cornish said it is difficult to provide a timeline because the administration is unsure if the college will reach its target enrollment. The college pushed back the enrollment confirmation deadline for students until June 1. She said the college also anticipates poor retention.

Chris McNamara, clinical associate professor and clinic director in the Department of Physical Therapy and chair of the Faculty Council, said there was a private question from a faculty member asking why senior administrators at the college were not donating a portion of their salaries to fighting COVID-19. Cornish said President Shirley M. Collado would have information regarding the question in a message to the campus community April 8.

Whitehead said he was curious as to whether or not the college would require COVID-19 testing before allowing community members to return to campus. Cornish said the administration had not had that discussion at all yet.

Cornish said the college is planning for the possibility that the college will remain closed for the fall semester.

At the beginning of the meeting, sophomore Hunter Simmons, Student Governance Council Class of 2022 senator, said he will be working with the SGC to form policies regarding student housing. Simmons said he would like the input of faculty members in starting a student COVID-19 response team to advocate for student housing needs.

Simmons said he and other students have reached out to the Collado administration expressing their concerns. He said he is dissatisfied with the administration’s response.

Sabbaticals for the 2020–21 academic year were canceled by the college, which faculty were previously informed of by the college via email.

Brad Hougham, associate provost for faculty affairs, said at the meeting that faculty members received an email with instructions on how to petition against the cancellation if they wish to have their sabbatical reinstated as originally approved. He said that the criteria for this approval have not been fleshed out but that the Collado administration will be looking at whether or not the faculty member is pursuing a once-in-a-lifetime project.