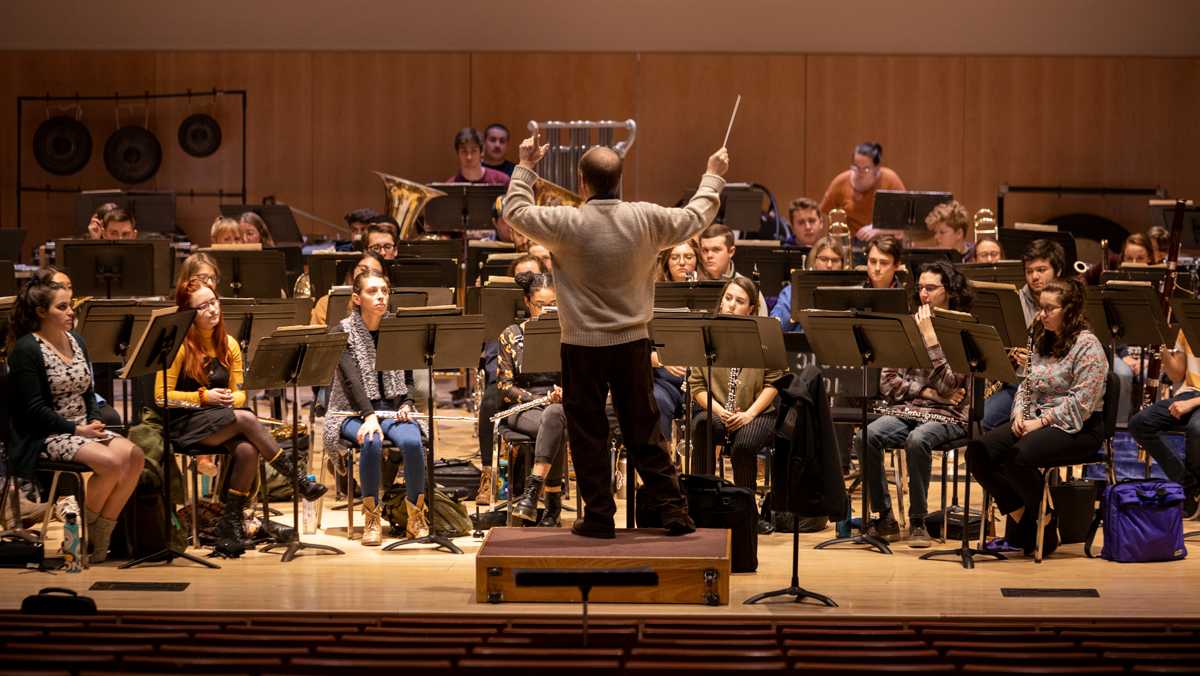 With Karl Paulnack, dean of the School of Music, stepping down from his position at the end of the semester, Ithaca College hosted the four finalists in the search to replace him in open sessions March 2–6.

Each candidate had their own session in which students, faculty and staff could ask them questions about what their leadership plans would entail.

The search committee, consisting mainly of faculty, some students and non-Ithaca College personnel, has not made any further announcements about when the final decision will be made. La Jerne Cornish, provost and senior vice president for academic affairs, will be in charge of decisions about the dean searches moving forward, said Sara Haefeli, associate professor in the Department of Music Theory, History, and Composition and co-chair of the Music Dean Search Committee, via email.

Haefeli said via email that she is impressed by all of the candidates.

“The only thing I have to say about the candidates is that they were all outstanding leaders,” she said via email. “It was a pleasure to get to know them through the interview process.”

Sophomore Naya Griles asked each candidate questions about how they will foster and improve diversity in the music school.

McDonald said he would address these concerns through facilitating mentorship and fostering a welcoming campus climate. A diverse student body is critical for recruiting and retaining diverse people, he said. Approximately 30 students, faculty and staff attended McDonald’s open session.

“If that [diversity] is not present, you’re going to have a deficit in making those kinds of connections and in recruiting and retaining students who make an institution,” McDonald said.

As a white male, McDonald said, he is aware of his privilege and aims to use his position to “signal boost, to amplify and to encourage” people of color.

Griles said that as a student of color, she was skeptical of McDonald when he walked into the room, but she said she felt that he responded well to everyone’s questions regarding diversity issues.

Adler said she thinks that spotlighting diversity in the music school will help recruit more diverse students and faculty. She said she was turned off by the posters of all white men she saw when touring the school.

Similarly, Hanley said she wants the school itself to reflect diversity so that it is more welcoming to prospective students, faculty and staff. Approximately 50 people attended her session.

“We need to make sure those recruitment materials show that everyone is welcome,” Hanley said. “That you’re there not as a token in the photo, but there are people here. How do we build that? It’s going to take time.”

Hanley also said she has intentionally created the most diverse leadership team than all previous Berklee administrations while in her leadership position.

“I have the most diverse leadership team at Berklee, and that is not a happy accident,” she said. “It’s not that I’m a hero: It’s that I am noticing and being strategic about building that community and fostering those relationships. No one wants to be the only in the room.”

Washington said he would emphasize the positive aspects of the music school to recruit and retain students and faculty of color. Approximately 30 people attended his session.

“You have to sell them on what is the wonderfulness of this place,” he said. “In terms of faculty, faculty will go wherever the job is. You just have to make a job, not just say that sounds easy because it isn’t, but you do have to work at it. And whoever the next dean is, that should be one of their priorities.”

A few of the candidates were asked about how they would handle microaggressions. Students at Ithaca College have consistently raised concerns in recent academic years about microaggressions occurring in the classroom.

Most recently, three students in the Department of Theatre Arts made a display sharing experiences of microaggressions that have occurred in their classrooms. In 2015, the college witnessed campuswide protests centered around students’ concerns about how the college was handling microaggressions and diversity issues.

Washington said he would focus on educating people if microaggressions occurred.

“The best way to deal with things like that is to stay calm,” Washington said. “We live in America. There is discrimination everywhere. The question is how you deal with it. … If somebody dislikes me because of the color of my skin, I can’t do anything about that. What I can do is try to educate them to not be so ignorant.”

Adler said she wants to make sure that people with marginalized identities are not burdened with educating others. She said that while working with the diversity task force at DePauw, she organized faculty in developing a vocabulary to discuss the topic.

Some of the candidates were asked how they would manage and recognize students’ mental health in the school’s programming. Some music students have recently raised concerns that their degree programs and the culture of the music school negatively impacts their mental health.

Freshman Lila Weiser asked McDonald how he would handle students’ mental health concerns. McDonald said that he acknowledges that college students struggle to balance their mental health and that he will make sure the music programs respect that.

“There has to be moments of space, reflection and inquiry for students,” McDonald said. “That becomes preventative when you overburden students with curricular demands about performance and all of those things.”

Griles asked Hanley how she would remedy the culture in the music school that Griles feels makes students feel guilty for taking breaks. Hanley responded that it is critical for musicians to take breaks in order to perform their best. She said she encourages students to find hobbies outside of music.

All of the candidates were asked about their views on Greek life on campus and what role they see themselves in facilitating it.

The music school has the only professional-based Greek life on campus. There are three groups, Sigma Alpha Iota, a fraternity, Phi Mu Alpha Sinfonia Fraternity of America and Mu Phi Epsilon, a mixed-gender Greek house.

Adler said that she recognizes the value of Greek life but that she also believes it needs to be more inclusive.

Kucza also asked Washington about his view on Greek life. Washington said in response that he is skeptical about Greek life after working at a Big Ten school — part of a network that consists of Midwestern universities with a prominent sports culture — where Greek life has led to many problems for the college. However, he said, he recognizes the value it holds for students.

McDonald said that he is open to Greek life and recognizes its importance in cultivating donations.

Hanley said that she is open to Greek life and recognizes its importance for networking, fundraising and scholarships but that she does not see herself leading it. Previously, Paulnack served as an adviser to Greek life on campus.

A few of the candidates were asked about their views on incorporating and balancing the music curriculum with modern and classical music.

Dmitri Novgorodsky, assistant professor in the Department of Performance Studies, asked McDonald how he would work to fit classical music into a curriculum that is evolving with the times.

McDonald said that he recognized that many people have similar concerns to Novgorodsky and that the curriculum can balance both. Similarly, Hanley said she believes both are crucial to teaching all genres while ensuring it is the top quality from all respective genres.

Kucza said she liked Adler’s answers but felt they could have better represented Ithaca College.

“I also wish she had known Ithaca a little better,” Kucza said. “You end up not doing as deep a dive as you want to. I really loved her answers and thought she carried herself in a really professional way, so I was really impressed.”

Griles said that she likes that Hanley is a woman, and she also felt that Hanley answered the questions about diversity and mental health authentically.