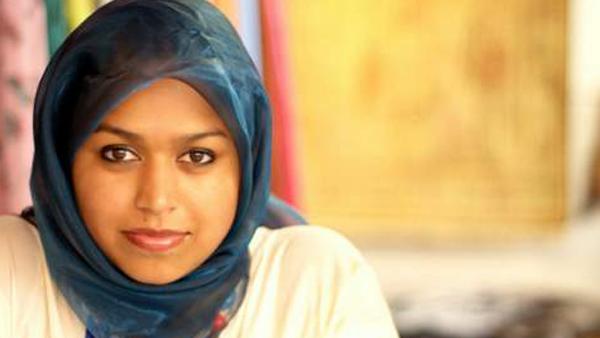 Courtesy of SixteenR.com
Nancy Hoque, a designer and founder of SixteenR.com, created a website to sell scarves for Muslim women. Hoque will visit campus to speak at 6 p.m. Thursday in the Handwerker Gallery.
By Megan Devlin — Staff Writer
Published: February 21, 2013

Ithaca College will host Nancy Hoque, designer and founder of sixteenR.com, an online store that sells scarves for Muslim women.

Hoque will address the campus at 6 p.m. Thursday in the Handwerker Gallery. She will speak about the use of the scarf as a tool of empowerment, perceptions of the headscarf and the evolution of Muslim women’s identities.

SixteenR.com produces scarves based on the belief that style for the modern Muslim woman is evolving to incorporate fashion from the West as well as traditions from the preceding generations.

Staff Writer Megan Devlin spoke to Hoque ahead of her visit to the campus.

Megan Devlin: Tell me a bit about yourself. Has fashion design always been your background?

Nancy Hoque: I grew up in Southern California, and my parents are from Bangladesh. We grew up in a Muslim household. When I was growing up I didn’t have a lot of Muslim friends. But when I went to college I met a lot of people who were practicing Muslims, and I started making friends with people who wore headscarves. I started to learn more about my religion, and that’s where the interest came from. Also, I went to college post-9/11, so it was around the time when there were tense perceptions toward Muslims. I didn’t think it was fair, and I didn’t agree with these perceptions. It made me explore who I was, what my identity was and how this affected me. That was part of the reason why I started wearing a headscarf.

MD: Where do you get your inspiration for designing headscarves?

NH: Our motto is “Scarves that empower.” We want to spread a message of empowerment. We’ve been influenced by how Muslim fashion — or modest fashion — has been evolving and maturing. It’s a mix between cultures from the past and traditions that our parents bring and what’s current in Western society. The headscarf itself is an important accessory if you wear it every day.

MD: Why do you refer to your line of headscarves as a tool of empowerment?

NH: We want this scarf to be something that provokes thought, or that wearing it can create conversation in a way that we can have control over. The design of the scarf, the way you wear the scarf, that’s how it plays a role in the way a woman dresses. We want it to be a sign of beauty and strength, not a sign of oppression or dependence.

MD: What contributes to the misperceptions of headscarves as symbolizing oppression or dependence?

NH: There are two angles to it. One, with current events happening in the world, and the way the media shares information, a person can have the perception that Muslim women are not educated or that Muslim women are oppressed. In some parts of the world, unfortunately, that is the case, women are not able to advance in society as freely as we are in the U.S. But that’s not the case for many Muslim women all over the world. The other angle is, when you wear a headscarf, particularly in a society where it’s not the norm, it’s not very easy. The way you’re perceived affects you every day; people approach you differently. It can be a very difficult experience. So when we say scarves that empower, it’s about the experience of wearing a scarf, the determination to wear it and to show your identity. It was an empowering experience for me, and when I share this message I find that many women go through the same experience.

NH: In our designs we try to think of something unique and something that our customer, like the Muslim woman, can relate to or be inspired by. We have a few scarves that have quotes printed on them, like Malcolm X. We have a scarf with Rabindranath Tagore’s poetry on it, because we found it to be inspiring. We also do scarves like our headphone scarf. It’s a very different design and it doesn’t have a direct message, but it’s quirky, it’s different and it’s funny. It shows that you have a sense of humor by wearing that piece. We want to make an indirect statement with some of our designs. We also have a line designed by street artists … Not many other companies are using artwork directly on their scarves.

MD: What have been some reactions from both Muslim and non-Muslim women around the world?

NH: Many women who live in non-Muslim countries tend to be drawn more to the scarves. But we also had a response from women who do live in Muslim countries, and they’re just as inspired by our photography, the way we present fashion and the concept that scarves can be empowering … In Singapore there’s a lot of Malaysian and Indonesian Muslims. Indonesia itself is huge on modest fashion. They’re the forerunners of where fashion is going — kind of like how Paris influences mainstream fashion. Over there, they have their own trends and many women are all of a sudden wearing headscarves. It’s cool to see that it resonates somewhere.

MD: What is the future for SixteenR.com?

NH: It’s like the Starbucks motto: “We’re not in the coffee business, we’re in the people business and just happen to sell coffee.” We happen to sell scarves, and I love designing scarves. But my passion is this message of empowerment and connecting with women. Going into this modest style movement, I love exploring with different ways to present styles of dress, different modes of creativity and being unconventional.

MD: What messages do you hope Ithaca College students and faculty take away from your presentation and gallery exhibit?

NH: What I want them to take away is, one, to not judge a book by its cover. A lot of this stems from how people perceived who I was as a person based on my outward appearance. There’s more to what meets the eye. Muslim women are just normal women, regular women. Another aspect to take away is that this is a brand new way of fashion, a brand new style movement being created. This rarely happens. It’s very exciting and something to recognize.