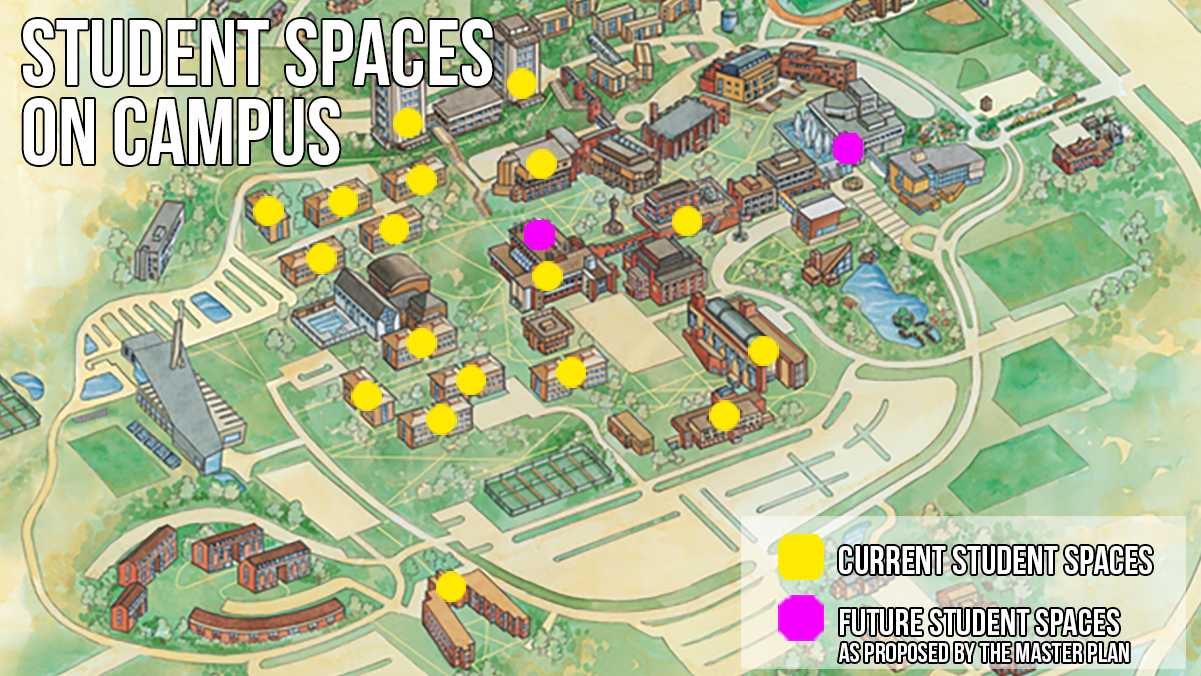 During most weekdays and weeknights of the school year, students around Ithaca College search for spaces on campus to relax, work on projects and socialize. While the college provides students with areas to study, efforts have recently been made to increase student space on campus.

On March 6, Ithaca College’s Student Governance Council discussed a bill that would add more study space in the library by removing shelves of books. Additionally, some professors in the School of Humanities and Sciences have expressed concerns about the lack of study spaces for H&S students, as H&S is the only school that is spread out among several buildings on campus.

“The thing is, for a lot of students in H&S, we don’t really have a building,” said sophomore Emily Honen, H&S senator on the SGC. “Most of our classes are in Friends, and there aren’t any spaces there. There are some in Williams, but not many.”

Ali Erkan, associate professor in the Department of Computer Science, said he encourages students in his classes to study in groups but feels there are not enough gathering spaces for students to utilize.

“Real estate has always been an issue,” he said. “I think that if those places were built, if rooms were created for this purpose, students would start using them, and I think we would realize our need was higher than what we could have surveyed.”

In 2015, the Division of Finance and Administration introduced a Master Plan that outlines physical changes that the college hopes to make over the next two decades, including adding more gathering spaces for students on campus.

Tim Carey, associate vice president for facilities, who helped write the Master Plan, said that over the past two years, the college has added and refined some of the spaces near the Dorothy D. and Roy H. Park Center for Business and Sustainable Enterprise, the McDonald Lounge, Williams Hall, Friends Hall, the Center for Natural Sciences, the lounge in the James J. Whalen Center for Music, the Fitness Center and several other areas on campus.

“The gathering–space issue has been something that I’ve been really pursuing since the adoption of our Master Plan,” Carey said. “We are also eager to hear from students, faculty and staff about other suggestions about additional space alterations.”

Some of the projects that the Office of Facilities has planned for next year include a new gathering space in the Terrace Dining courtyard, which will be implemented this summer; more seating outside the Park Center; and new umbrellas for the McDonald Lounge.

Raffaele Nicoletta, a freshman anthropology major, said he feels H&S has enough spaces and that the college does as well.

“Personally, I’ve always been able to find a place to do my work,” he said. “Obviously, during midterms and finals, that’s a little bit difficult, but that’s something that all colleges deal with.”

Peyi Soyinka-Airewele, professor and chair of the Department of Politics, said the English and politics departments are working toward revamping the lounge area on the third floor of the Muller Faculty Center by working with a college designer to add in new furniture.

SGC Senator-at-Large Charlie Kane sponsored the bill that proposed removing books from the library to increase study spaces. The bill was tabled, meaning it was set aside to be voted on at some point in the future. The issue of spaces on campus came to Kane’s attention, he said, in December of last year while he attempted to study for his chemistry exam in the library.

“Myself and about three other people were sitting on the floor because they couldn’t find enough space,” Kane said. “I felt as though there were more people in that situation.”

Kane said he feels that if the library eliminated outdated and unused books, additional spaces could be added for students to study at when it gets crowded.

Lisabeth Chabot, the college librarian, said the library has taken similar steps over recent years, including reducing the space the reference books on the first floor take up. She emphasized, however, that she feels it is important to have books in the library because people use them.

“It’s sort of a balancing act to try to live within the space we have,” Chabot said.

Kane said he will propose a new library bill to the SGC in the coming weeks that will encompass some of the recommendations she made to him.

When Kane first presented his bill, he cited several colleges and universities that have libraries without any physical books in them.

One of those schools is the University of Michigan. According to its website, the University of Michigan’s Taubman Library moved its physical book collection into a storage facility off campus by 2015 to create more space for students to study. The library has a database of digital books for students to use and a system in place for students to request books stored in the off-campus book facility. The books take up roughly half the space in the new facility that they had taken up when they were in the library.

Jane Blumenthal, associate university librarian and Taubman Library director, said the school and the librarians began planning this back in 2009. She said that at the time, upwards of 80 percent of the print books the library had were not being used.

“We were in a position where the print materials we actually had were getting very little use,” she said.”

Other colleges also have plans to address student space issues.

Providence College, a private school with 4,680 students, has a student union facility similar to the Campus Center but larger in size, with big meeting spaces, stores and lounge areas. Mark Rapoza, director of capital projects and facilities planning at Providence College, said it is one of the most popular gathering spaces on campus.

Providence College’s Institutional Master Space Plan, which is generally updated every five years, outlines a series of goals the college has for renovations on campus. Unfortunately, Rapoza said, options are limited when it comes to expanding the campus because the area is landlocked.

“We have to get creative to make sure that we are creating spaces on campus, both interior and exterior, that allow students to feel as though they are not being encroached upon,” he said.

SUNY Cortland, a state school with just over 6,900 students enrolled, also has a long-term plan for renovations on campus, The Facilities Master Plan. Rob Shutts, director of facilities management at SUNY Cortland, said much of this plan has been slowed down recently because of cuts that have been made by the state. But in February 2015, Cortland opened its Student Life Center — a very large recreational center that Shutts said is becoming the major social center for students on campus.

“There’s fitness, and there’s dining, and there’s games,” he said. “I think that is sort of becoming the social center of our campus.”

Kane said that aside from the college’s library, he feels that there are plenty of spaces on campus to utilize but that sometimes students need to get creative and find them. He said he believes that to improve gathering spaces on campus, the college should add more amenities to existing areas.

“The issue is not making more spaces. It’s making them appealing to students,” Kane said. “We need to focus on that.”