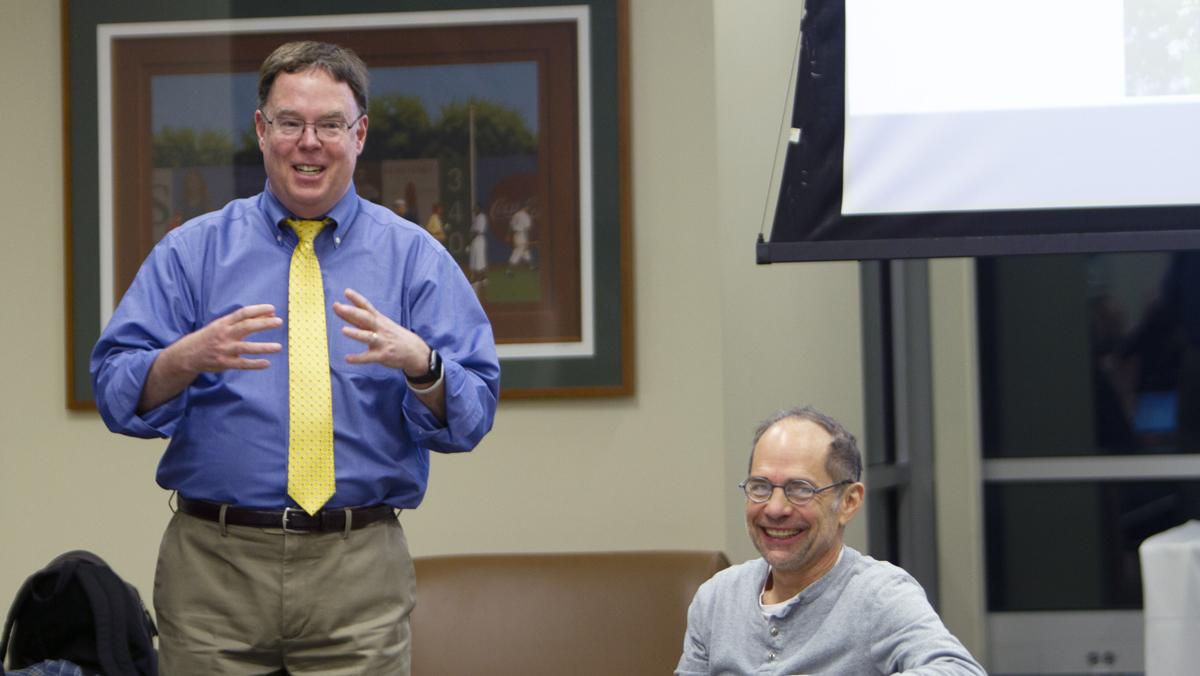 Ithaca College Faculty Council members favored mandating a college-wide policy on cell phone usage in the classroom at the Feb. 5 meeting. Approximately five members of the group opposed creating such a policy.

Devan Rosen, professor and chair of the graduate program in the Department of Media Arts, Sciences and Studies, started a dialogue on technology use in the classroom with the council. Rosen said that he also wanted to establish how the college values technology use and how the college could communicate this.

Rosen said some colleges do have a campus-wide policy on mindful technology use. If the college implemented such a policy, faculty members would be allowed to “opt-in,” meaning they can state clearly in their syllabus or communicate that technology use is allowed in the classroom. Otherwise, unless the professor directly states that it is allowed, students would not be able to use mobile devices in the classroom.

Rosen said he was encouraged to start the dialogue on technology use in the classroom after a discussion with La Jerne Cornish, provost and senior vice president for academic affairs.

Because the college does not have a consistent policy, Rosen said junior faculty members might not want to discourage technology use. It is seen as unpopular in the eyes of the students.

While Rosen said that he was not necessarily advocating for a formal policy, the faculty discussed the benefits and disadvantages of having one.

Stanley Seltzer, associate professor in the Department of Mathematics, said it would be helpful to share model policies, which would state faculty’s choice to “opt-out” of technology use in the classroom, with faculty members to put into their syllabus.

Jerome Fung, assistant professor in the Department of Physics and Astronomy, said he would be opposed to a policy against technology use. Instead, Fung emphasized that it is important to treat students like adults and let them make their own decisions about technology use.

“I recognize the problem and distractions caused by mobile devices are real,” Fung said. “But at the same time, banning phones by default makes a default value judgment that may not always be applicable.”

Rosen said research has shown cell phone use in the classroom can be distracting, not only to the students using the mobile device but those around them. He also said research has shown that note-taking on laptops or similar devices is not as effective as note-taking with a pen and paper. Overall, Rosen said that technology usage can negatively affect students’ academic performances.

Lisa Farman, assistant professor in the Department of Strategic Communication, said she has a technology policy in her classroom restricting technology use. She said she has received positive feedback from students about the policy. However, she said she understands the fear that if there is not a standard, it can have a positive or negative reflection on the individual professor.

Farman said a tenured professor had criticized her for not having a technology policy before she had instated one.

“We’re all over the place with this,” Farman said. “Because it’s so individual and there’s not a collective, ‘This is how we’re approaching this policy,’ it makes it individualized, which is stressful.”

Tom Swensen, professor and chair of the Department of Exercise and Sport Sciences and chair of the Faculty Council, brought the discussion to a close by asking the council if they would support a policy on mindful use of technology. The council voted overwhelmingly in favor of a policy of that kind. Swensen said the idea of a policy should be discussed transparently with students and with organizations like the Student Governance Council.

The Faculty Council also discussed the results of the 2018 commencement, which was reorganized from past commencement ceremonies. David Prunty, executive director of the Department of Auxiliary Services, presented the overall ratings and feedback from surveyed students on the event, asked for feedback on the commencement and discussed possible means of improvement.

Faculty Council representatives expressed concerns that dividing up the chute by school could cause problems because there is a large number of faculty in each school.

Later in the meeting, the council discussed tenure policy with Peyi Soyinka-Airewele, professor and chair in the Department of Politics. The council decided to make a recommendation that the policy of tenure in the faculty handbook be amended. The amendment would specifically focus on clarifying what can and cannot be included in sending work to external reviewers.

The council also motioned to table a recommendation from David Turkon, associate professor in the Department of Anthropology, which suggested changing the language in the criterion to become a full professor at the college.

Regulations on laptop use in college classrooms differ among professors