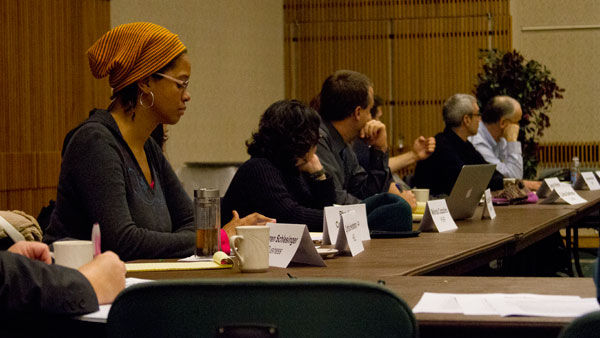 The Ithaca College Faculty Council discussed its continued efforts to communicate with committees and the college on vetting experimental courses and negotiating the proposed intellectual property policy at its monthly meeting Nov. 12.

The Academic Policies Committee and the Committee for College-wide Requirements are overseeing the implementation process of the new courses for next semester and are reporting the feedback from faculty and students to the Faculty Council. The majority of the themes and perspectives courses are pre-existing, but any newly created or added courses must be vetted for their relevance to the theme.

First-year students are required to take Themes and Perspectives courses, offered as part of the Integrative Core Curriculum, in addition to taking a first-year seminar and fulfilling their major, minor and liberal arts requirements.

Steven Skopik, professor and chair of the Department of Media Arts, Sciences and Studies, said the college would organize town hall–style meetings for faculty, staff and students to ask questions and make comments about the new courses. He also said the committees and Marisa Kelly, provost and vice president for educational affairs, have been discussing the overall goals and progress of the new courses.

“Typically, a lot of untenured faculty have done much of the heavy-lifting in implementing the Integrative Core Curriculum,” Skopik said.

John Rosenthal, professor in the Department of Mathematics, suggested the survey also be given to the Student Government Association to include students’ reactions.

“It would be politically wise, and it would make sense to seek comments from the Student Government Association,” Rosenthal said. “All concerned parties should be involved.”

Rosenthal also suggested the survey include retired faculty who have experience with experimental courses and have served as reviewers for Themes and Perspectives courses. Retired faculty were initially excluded because, like part-time professors, they do not receive tenure.

The council revisited its discussion of intellectual property, which focused on professors’ ownership of their lectures. Student Disability Services guarantees students with disabilities to record lectures for their convenience, but it is unclear if students who do not have disabilities have a right to record and distribute lectures.

Peter Rothbart, professor in the Department of Music Theory, History and Composition, said SDS is developing a protocol for what happens to recorded lectures and what the legal ramifications would be for a student who distributes the recordings online.

“Your lectures could be on Facebook, or worse,” Rothbart said.