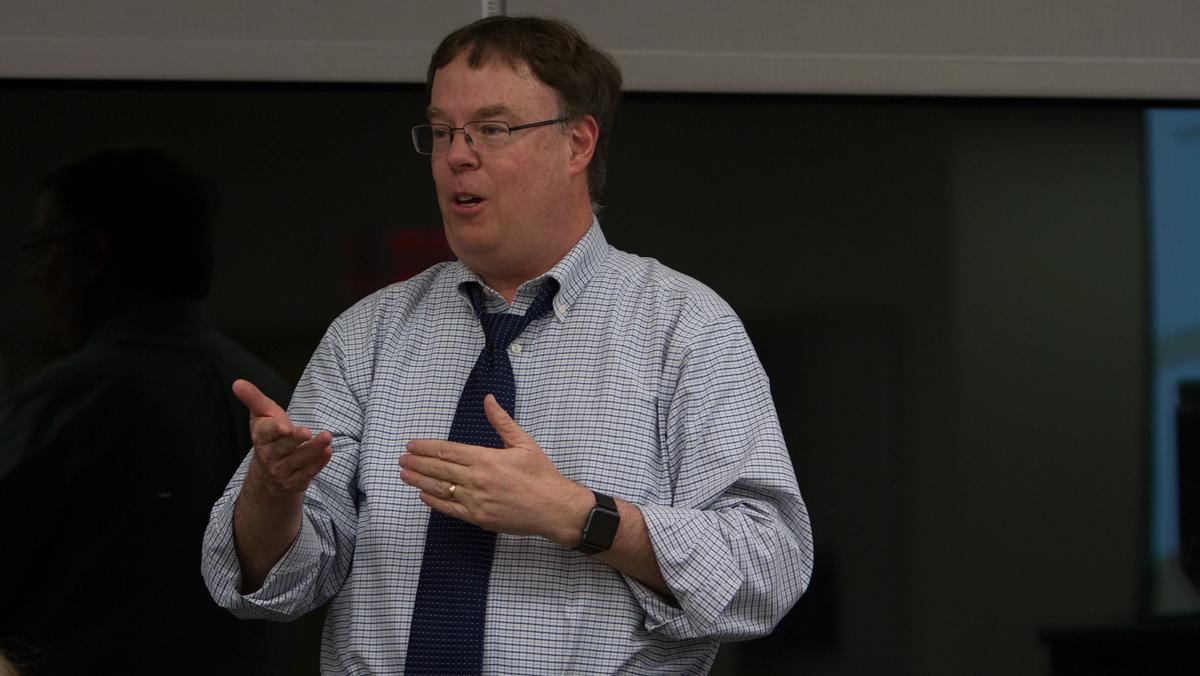 The Ithaca College Faculty Council discussed the most recent draft of the Rules for the Maintenance for Public Order free speech policy at its March 6 meeting.

Dave Prunty, executive director of auxiliary services and co-chair of the Commencement Committee, presented updates on plans for Commencement. Registrar Vikki Levine also discussed potential changes to the academic calendar for Fall 2019 and a proposed change to eliminate a college-wide policy about classes that count toward a students’ major or minor.

The council also discussed how the 2018–19 budget has not been passed yet. Tom Swensen, professor and chair of the Department of Exercise and Sport Sciences and chair of the Faculty Council, said he believes this is because the Ithaca College Board of Trustees simply ran out of time to thoroughly discuss issues surrounding the budget.

Council members discussed the most recent draft of one of the free speech policies and debated what kinds of behavior qualified as a “disturbance. The policy states that disturbances — which are defined as behavior that interrupt an event or activity of operation — are a violation of the policy. Council members agreed that while inside the classroom, the professor has the power to decide what qualifies as a disturbance. The council also discussed the power that Office of Public Safety has outside of the classroom in determining what is considered a disturbance on campus.

Peyi Soyinka-Airewele, council member and chair and professor in the Department of Politics, said she thinks racial profiling affects people’s definition of disturbance. She said there needs to be justification to classify something as a disturbance.

She said mundane actions taken by students and faculty of color can be perceived as more threatening because of racial profiling. Soyinka-Airewele said she, a woman of color, once had a gun pulled on her by Public Safety in a parking lot on campus around midnight.

“It’s very different from how they see maybe my male colleague who is white and American and for them, poses no threats,” she said.

David Gondek, council member and associate professor in the Department of Biology, said he thinks that there should be additional language added to the draft to describe the severity of what qualifies as a “disturbance.” He said the term “malicious” could clarify the draft language.

Additionally, Prunty said that the Commencement Committee has worked on ways to reduce the length of Commencement in order to allow the Class of 2018 to walk and have their names read. He said that most of the Fall 2017 semester was spent conducting research and receiving input from parents, students, faculty and staff.

“This is going to be an experimental year,” Prunty said. “We are doing everything we can to meet those two goals — providing recognition and doing it as expediently as possible.”

Prunty also said names will be called using a pre-recorded voice and a card scanning system orchestrated by Marching Order, an event–planning company. He said there will be one large reception after the ceremony instead of individual receptions at different locations for each school.

Chuck Ciccone, council member and professor in the Department of Physical Therapy, said he thought that the new setup might interfere with parents’ ability to take pictures of students. Prunty said there will be multiple professional photographers at the event to compensate for a lack of available space in front of the stage.

Levine also presented potential changes to the Fall 2019 academic calendar. Levine said data from surveys suggested that students and parents wanted the first semester to end at an earlier date. She said that a proposed solution from the Calendar Committee would be to shorten finals week and make it four days instead of five.

Council members had concerns that a shorter finals week may cause students to have too many exams scheduled on a single day or in a manner that did not give them enough breaks in between exams. Levine said it is difficult to gauge the rate at which professors must make special accommodations for overbooked students.

Matt Sullivan, council member and professor in the Department of Physics and Astronomy, said he thinks the school should experiment using a shortened finals week and use student feedback to decide whether or not to continue.

Levine also shared a proposal made by the Academic Policy Committee to eliminate a college-wide policy which dictates that if a course fills requirements toward a students’ major and minor, it can only contribute to their major. Levine said that each school and program has its own policy on the issue, and that it makes more sense to support each individual school’s policy. The council passed a motion approving the policy change proposal.