Faculty hold teach-in on Rochon vote of no confidence 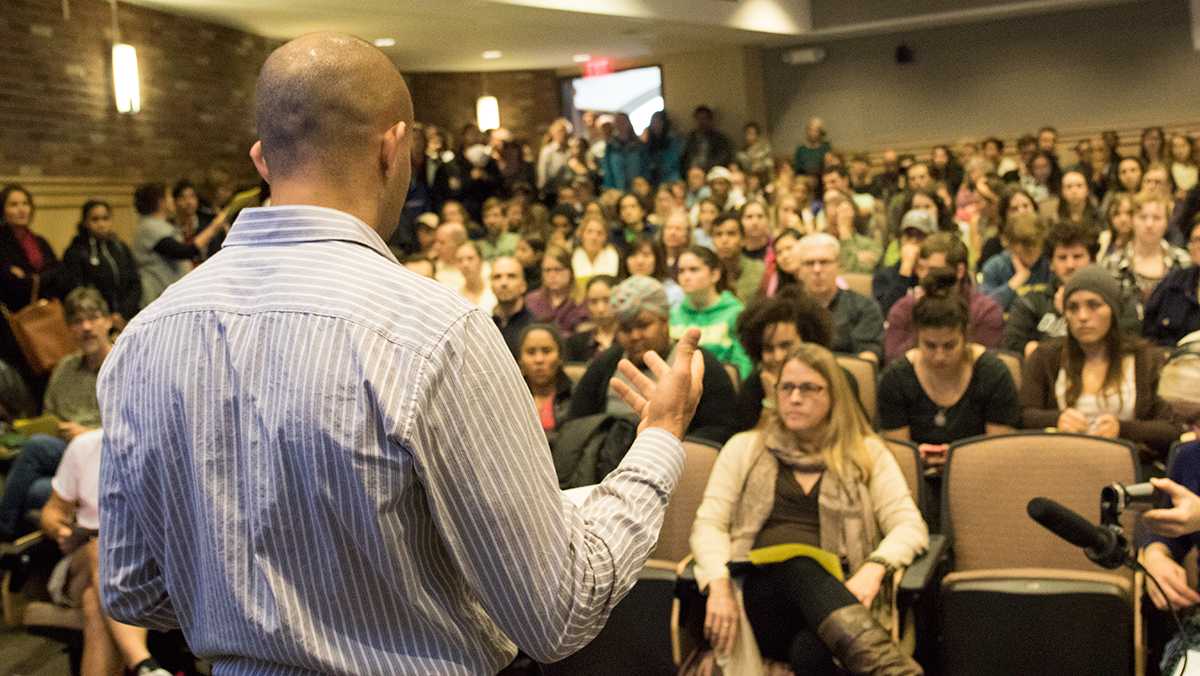 “The College is Ours.”

These and other phrases flashed on a screen as students and faculty walked into Textor 102 for the Nov. 19 teach-in, “Confidence or No Confidence? Making an Informed Decision.” The event was organized by Peyi Soyinka-Airewele and Patricia Rodriguez of the politics department, as well as by other concerned faculty.

Approximately 200 people attended the event, filling all the seats in the room, and those who couldn’t find a seat lined up along the walls. Members of Ithacappella sang to the crowd as people filed in. Soyinka-Airewele said the teach-in was meant to show the faculty perspective on the events on campus that have led up to the call for no confidence votes and to offer a chance for students and faculty to ask questions about recent events and issues around the campus racial climate and college governance.

A document titled “‘No Confidence’ in President Rochon: Experiential Evidence” listed several instances where some believed President Tom Rochon did not prove himself to be an effective leader. The document alleged that Rochon has top-down, out-of-touch leadership; a disregard for minority community members; and a disconnection from the Ithaca College community.

There were several student and faculty speakers who talked about the no confidence vote for Rochon and the racial issues happening on campus.

Junior Taranjit Signh welcomed students and faculty to the teach-in and briefly spoke about this disconnection between faculty and students, regarding what’s happening on campus, before opening up the floor to the other event speakers.

Tatiana Patrone, associate professor of philosophy and religion, read her statement, titled “An Uncertain Decision,” where she discussed how the case against the president is complex and why she thinks it is important people look at the college’s government structures rather than focusing solely on the president.

“I have not been persuaded by the arguments against this president,” Patrone said. “My primary concern remains with the improvement of the Ithaca’s government structures. So this is what I want to focus on, as opposed to getting rid of a specific individual, making him the perceived reason for the problems on this campus.”

Dominick Recckio, president of the Student Government Association, read aloud a letter from himself, former SGA presidents and one student trustee from the past nine years expressing their disappointment in the leadership of Rochon.

Nick Kowalczyk, associate professor in the Department of Writing, went into detail about Rochon’s “top-down administration,” saying Rochon has a CEO’s way of doing things.

“As a leader, he has a kind of vocabulary which suggests a mentality that is perhaps well suited to being the CEO of a small corporation but in my opinion, is not well suited to lead an institution of higher learning,” Kowalczyk said. “I believe that we need a leader who sees himself or herself not as above us, but among us.”

Derek Adams, assistant professor in the Department of English, spoke out about the disregard for minority community members.

“There’s a nearly unbearable, unsustainable amount of pressure and responsibility that is now being borne by students of color here, the POC at IC group, and all of its allies that makes it difficult for them to complete the work for their classes, to sleep at night and engage in conversations that are about anything but this movement, and there’s no acknowledgement of this whatsoever,” Adams said.

Mary Bentley, associate professor in the Department of Health Promotion and Physical Education, addressed the administrative disconnection on campus.

“It is Rochon’s disconnection that has catalyzed this form of activism in both students and faculty,” Bentley said. “His door is not open, his policies are unchanged, he has had a deaf ear and has rendered many, many mute. It’s for these reasons that I have no confidence in him as a leader.”

Maura Stephens of the Park Center for Independent Media described herself as the sole staff member speaking in front of the audience. She discussed the low campus morale and the administrative response to criticism, as well as the fear among the staff members on campus.

“Staff don’t speak out too much,” Stephens said. “Staff are unprotected by tenure, as are part-time faculty attempting to unionize, and they don’t have a voice because they are afraid to speak out.”

Claire Gleitman, professor in the Department of English and president of Faculty Senate, opened the floor to those in the audience to share their concerns and questions.

One student asked if Rochon were to resign, how long it would take to choose a new president, and who would make that choice in order to ensure that a president who is similar to Rochon is not selected.

The faculty speakers responded saying the decision is up to the Ithaca College Board of Trustees. Gleitman said Rochon serves to their pleasure, and they are the ones who have the power to decide to remove him. Kowalczyk said changes could happen if Faculty Council and the SGA demanded that the board of trustees become a more transparent body.

Students also asked questions regarding how the ICC courses can become more integrative and what students and professors can do to increase the conversation and continue the dialogue, for one student remarked on how they have not seen any conversation happening in the School of Music.

Zachary Mota, senior and attendee of the event, said he felt the teach-in provided good information for those who previously thought there wasn’t enough information being presented.

“The people behind this movement have been making some really strong efforts to make sure that there is proper information, proper discussion being had, and at this point, if there are people who are still saying that that’s not the case, it’s because they are closing their ears and their eyes,” Mota said.

Correction: A quote by Maura Stephens has been changed for clarity.