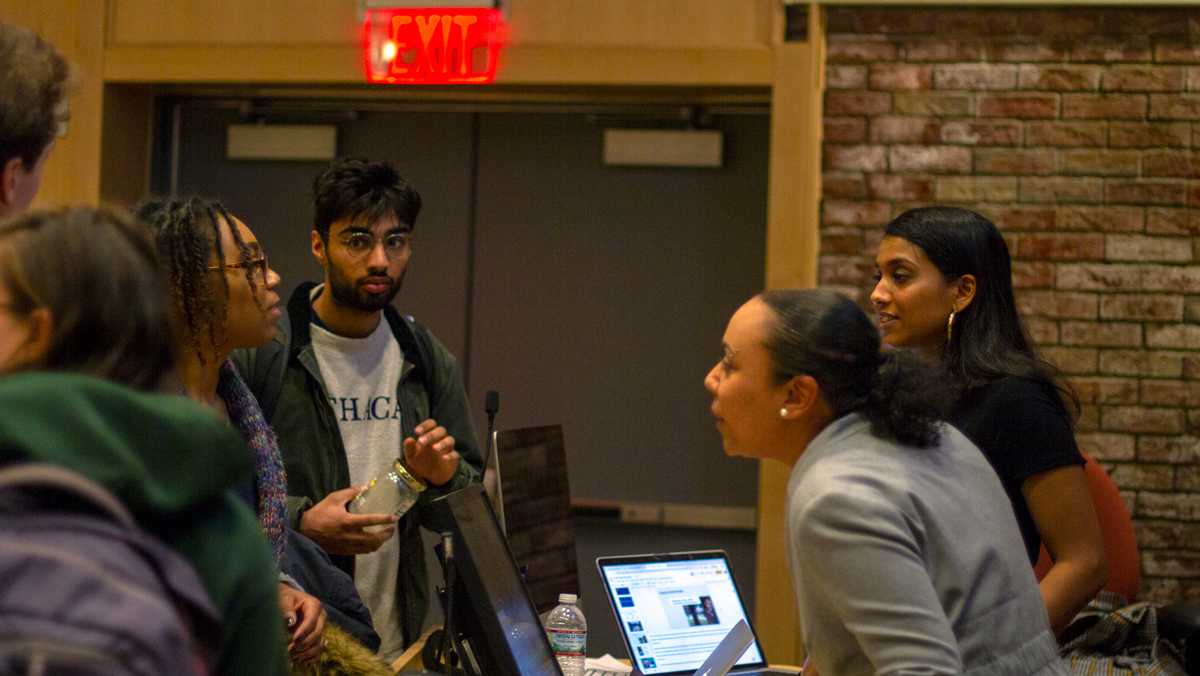 Ithaca College hosted the opening keynote event April 1 for the 2019 Finger Lakes Environmental Film Festival (FLEFF) on how to use technology to document abuses against immigrant communities.

Approximately 100 members of the college and local communities attended the event, titled “Eyes on ICE: Documenting Abuses Against Immigrant Communities.” The speakers, Palika Makam, U.S. program coordinator for WITNESS, and Diana Rosa, operations associate for WITNESS, gave a keynote presentation on how to film and record crimes against humanity using technology on hand, like smartphones, in a safe and helpful way. They said that knowing how to film social justice events — like when an Immigration and Customs Enforcement (ICE) officer is not following procedure or is being unlawful or unnecessarily aggressive — can not only inspire social change but also be useful to lawyers and create legal change.

FLEFF, which operates out of the provost’s office at the college, is a locally sponsored, weeklong film festival now in its 21st year. The festival aims to embrace and investigate sustainability in sectors including the economy, society, ecology and policy through film, programming and education.

WITNESS is an international nonprofit organization that helps to train people how to use video and audio to help aid people and lawyers in the fight for human rights. The organization also helps connect those who have videos of these crimes with lawyers and other groups that can help determine the best way to utilize the video. Their presentation emphasized how to best film ICE officers to keep with the FLEFF theme of disruption. Every year, FLEFF chooses a theme to follow, and this year, the theme is disruptions, which aims to stop the flow of events, ideas, processes and structures that are no longer working and replace and discuss these systems with new ways of thinking about them.

“Migration is a human right,” Makam said. “Migration is integral and innate to our survival and condition as human beings, and, so, borders, walls, fences, harmful policies like the ones we’re currently dealing with in the U.S. — those are disruptions and this is a disruption in our face.”

ICE and immigration issues have been politically debated nationally and in Ithaca. Ithaca is a sanctuary city, meaning that the municipal laws in the area protect undocumented immigrants from deportation. There have recently been two town meetings to protest an expansion of the Tompkins County Regional Airport. The expansion would possibly allow more ICE officers to come to Ithaca and, therefore, threaten immigrants within in Ithaca.

Zimmermann said the goal of FLEFF is to get people who would not usually be in a room together in a space that will spark a conversation and facilitate new ways of learning.

“We want the environment of the festival to make you feel different,” she said. “[Our job] is to give platforms to cutting-edge and really daring people, ideas, art forms, literatures and politics and see what happens and to get people into those rooms for conversations that are meaningful, but not to control it.”

Shevory emphasized that FLEFF is collaborative and works with every school on campus. He said the event on ICE was suggested by the School of Health Sciences and Human Performance.

At the end of the presentation, Rosa gave some tips on how to best document abuses against human rights. She said to tell a clear story with the video, focus on the officers and not the victim, protect necessary identities — including the identity of the person taking the video — stay objective, stay quiet unless narration is needed to clarify what is happening, film steadily and horizontally and be sure to pause for 10 seconds while filming. The 10-second pause could be essential to lawyers when they try to find out exactly what is happening and what is being said.

Freshman Hailey Aldrich attended the event and said she felt informed on how she can best help immigrants if she is witness to such an event.

Aldrich said she can see herself using these filming tips and skills in the future.

“You never know when these things are going to happen,” she said. “It’s easy and simple to remember, and it can make such a big impact.”

Sophomore Vedant Akhauri said he felt the entire presentation was enlightening because he was not aware of the law that gives people the right to record freely as long as they do not interfere.

“I thought it was very eye-opening,” he said. “Of course, I’ve known about police brutality and [ICE] being unfair with the legal search warrants and arrest warrants, but this just made me realize how uncivilized it can be.”

FLEFF events take place at the college as well as at Cinemapolis. This year, the events will run from April 1 to April 7. All events hosted at the college are free and open to the public and can be found at https://www.ithaca.edu/fleff/.