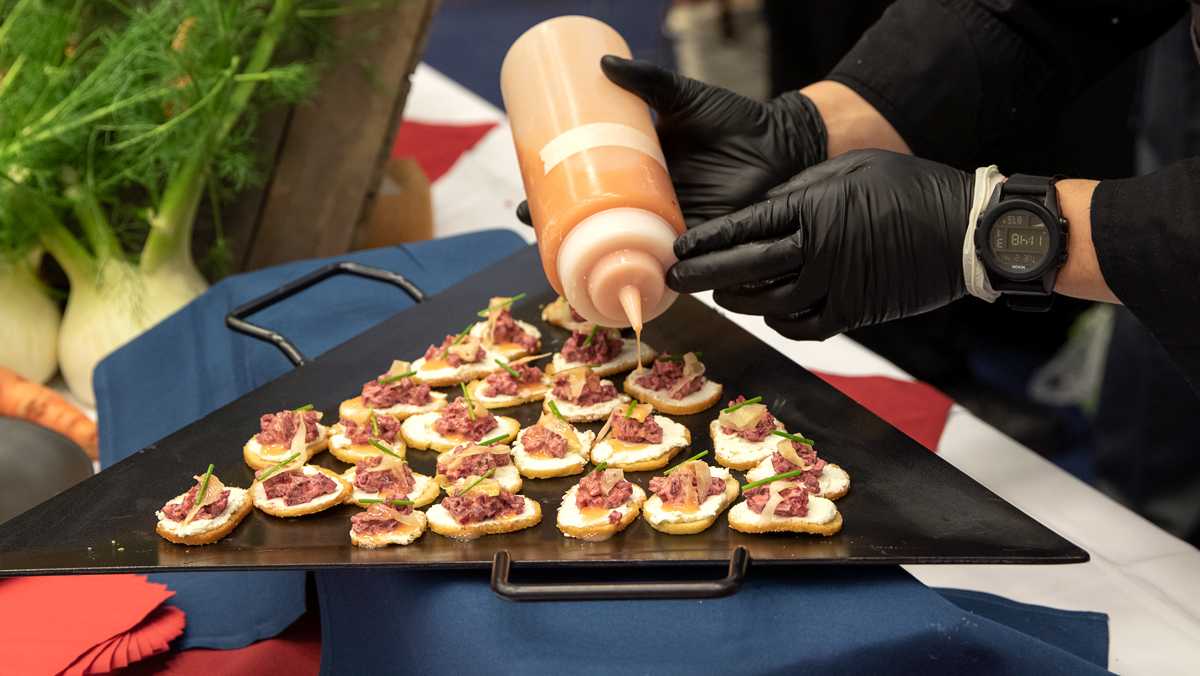 Chefs from Ithaca College, Cornell University and Maines Paper and Food Service Inc. came together Feb. 4 in the Emerson Suites to show students that “ugly” food tastes a lot better than it looks.

Terms like ugly and misfit are used to describe produce that does not normally get chosen by people in grocery stores or restaurants because of its appearance. As a result, there are a lot of fruits and vegetables that end up in the trash because of their appearances.

“There are plenty of vegetables that are completely usable, even if they have blemishes,” said Andrew Sutton, campus executive chef at Ithaca College Dining Services.

The Center for Civic Engagement, Dining Services and the Office of Energy Management and Sustainability started to plan this event in October with the goal of creating a competitive and tasty way for students to learn about food insecurity, sustainability and food waste. After brainstorming events that would both attract students and resonate with them, the Ugly Food Challenge was born.

Chefs set up stations around the room to present their creations, with specific guidelines from the event coordinators. All dishes had to be plant-based and made of “ugly” produce. Everything, including the plate, had to be edible.

“Plant-based was an obvious [choice] because it’s sustainable, and then as far as the zero-waste piece, we really wanted to challenge ourselves since our goal was [to serve] anywhere from 300 to 800 people,” said Rebecca Evans, campus sustainability coordinator in the Office of Energy Management and Sustainability.

At the doorway of the event, volunteers handed each student a wooden fork that would be used to cast their vote for their favorite dish after tasting. Students then embarked on their culinary journeys, visiting each station to watch local chefs cook before their eyes and tasting the results. The stations surrounded a colorful cornucopia of “ugly” produce that was unused by the chefs. Rebecca Sexton, assistant director for Dining Services, hoped the cornucopia would start a dialogue about food quality between students, she said.

“It sort of gets you talking about the things that are important, which are food waste, food insecurity and the importance of not wasting food just because it doesn’t look perfect,” Sexton said. “It’s perfectly imperfect.”

In addition to enjoying the food at the competition, the students were encouraged to take produce from the cornucopia home with them in order to prevent waste and increase food security.

“We let people take it [the food] away so there would be zero waste,” Sexton said. “And if they’re food insecure, they can cook it themselves if they know what to do with it.”

The chefs received a multitude of positive feedback for their food.

“The event is the best of both worlds because it’s talking about sustainability and you get to eat delicious food while you are here,” freshman Cedar Winslow said. “The beet and goat cheese crostini changed my life. It’s wonderful and amazing and perfect.”

After a total of 289 votes were cast by students, Winslow’s favorite beet dish came out on top in a very close race.

“Our winner, Jonathon Merrick from Maines, edged out IC Executive Chef Jack Applegarth by only 4 votes. Jonathon made the beet tartare and happily accepted the Golden Jackfruit,” Evans said via email.

Sutton said there are many ways to make “ugly” food delicious in your own home instead of wasting it. If you have bruised potatoes or yams, Sutton suggests scraping away at the damaged areas and creating a mash out of the leftovers. If you have tomatoes that are still good to eat but are not pretty enough for a salad, Sutton advises you to do what he did at the event: turn the tomatoes into a roasted salsa.

Clubs and organizations also participated in the event. Environmentalists of Ithaca College, Oxfam America Hunger Banquet, Eco Reps, Friendships Donations Network and others tabled to further education and outreach at the event.

Dishing It Out: Food Insert Centerspread