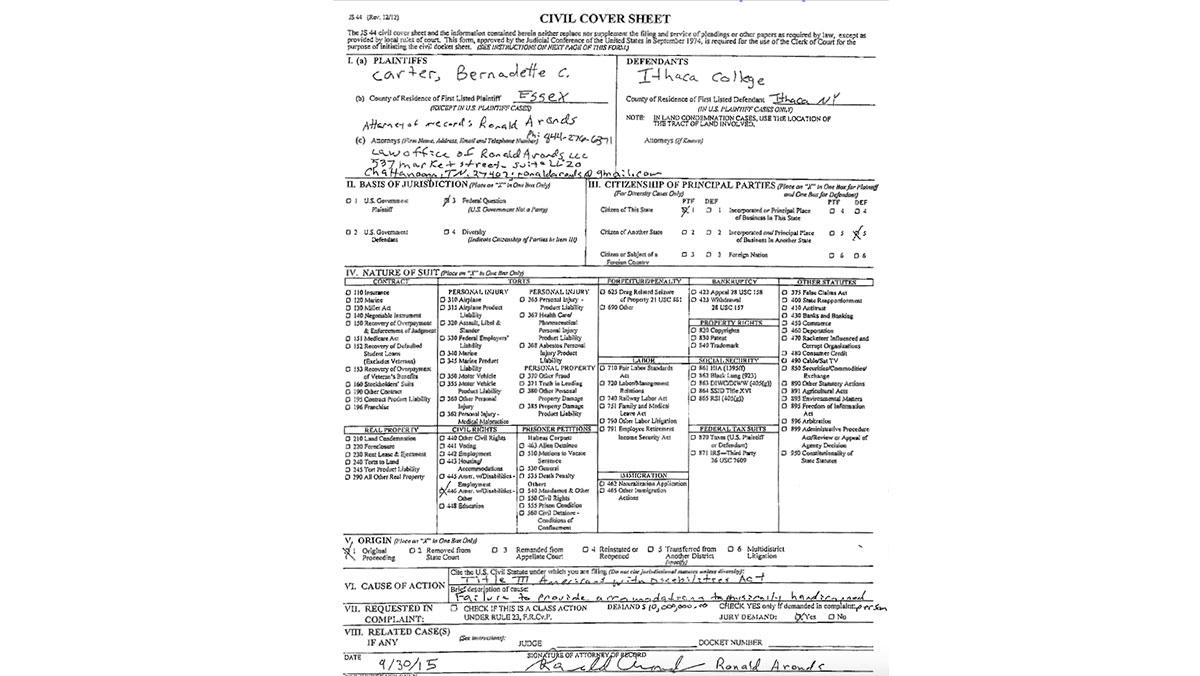 Courtesy of Law Office of Ronald Aronds
A former Ithaca College student filed a $10 million lawsuit Oct. 8 against the college under the Americans with Disabilities Act for failing to provide accommodations for a physical handicap.
By Faith Meckley — Assistant News Editor
Published: October 28, 2015

A former Ithaca College student filed a $10 million lawsuit Oct. 8 against the college under the Americans with Disabilities Act for failing to provide accommodations for a physical handicap.

Bernadette C. Carter of Essex County, New Jersey, was a student at the college between September 2009 and May 2014, according to court documents. Carter filed the lawsuit with the Law Office of Ronald Aronds, whose main office is located in Cranford, New Jersey.

According to the court documents, Carter incurred a “disabling disease or medical condition” between August 2012 and May 2014 that the college recognized as requiring accommodation.

The documents do not specify what Carter’s specific condition was, but that as a result of the college’s failure to provide accommodations, Carter “suffered both physical pain and mental pain and anguish causing her to have a more difficult time doing her school work and resulting in her being denied opportunities in her school program that were given to other students without disabilities.”

The lawsuit was filed under Title III, Title IV and Section 504 of the Americans with Disabilities Act. According to Title III, businesses and nonprofit service providers, such as private schools, that provide public accommodations must comply with nondiscrimination requirements to make their services accessible. Title IV addresses telephone and television access for people with hearing and speech disabilities. Section 504 states that “no qualified individual with a disability in the United States shall be excluded from, denied the benefits of, or be subjected to discrimination under” any program that receives federal financial assistance.

According to court documents, the $10 million sought will cover damages, attorney’s fees, costs, humiliation and embarrassment as well as any additional damages.

Ronald Aronds declined to provide information on the case until the college replies to its summons, which was issued Oct. 9. According to the summons, the college has 21 days to serve the plaintiff an answer.

David Maley, senior associate director in the Department of Media Relations, said the college had officially been served the lawsuit as of Oct. 26, but had no further comment.