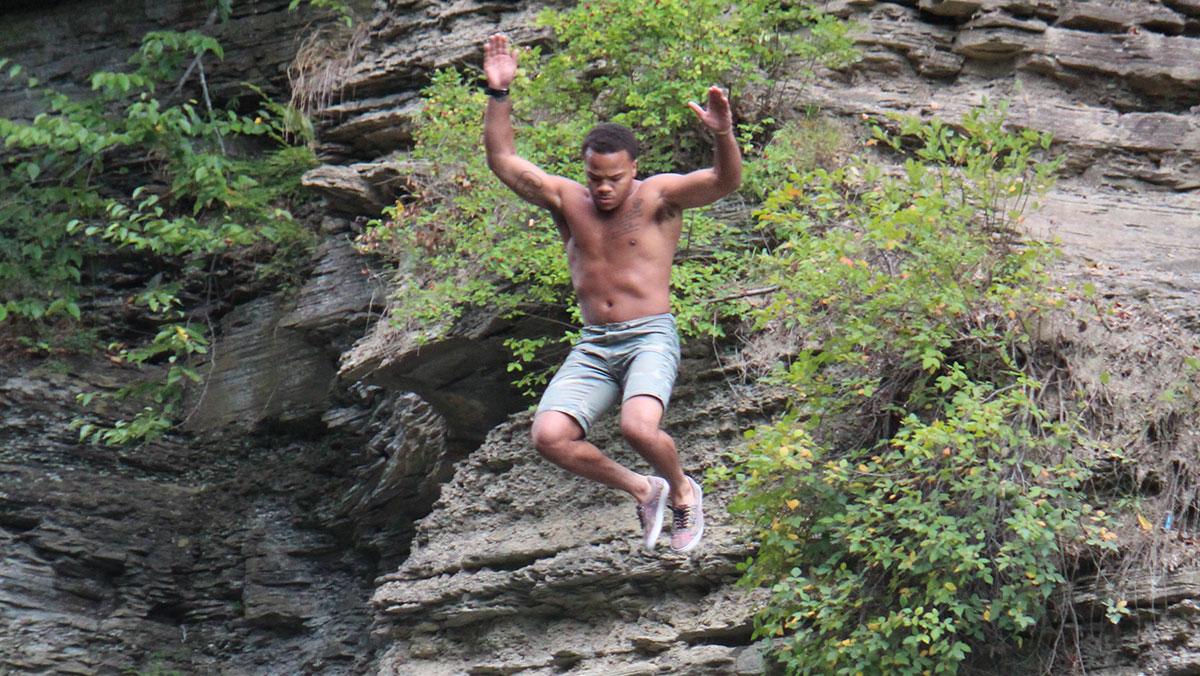 Tommy Battistelli/The Ithacan
A man jumps from the cliffs into the water at Second Dam.
By Faith Meckley — Assistant News Editor
Published: August 26, 2015

With a running start, a young man in blue swim trunks leaps from a ledge over 30 feet high, holding out his GoPro camera on a selfie stick to capture the moment.

“Oh, man!” A bystander shouts as the man plunges head-first into the water.

There is a long pause as a cloud of white bubbles rises up through the murky water in the place where he landed. After about 10 seconds, he re-emerges at the surface, shaking his head to get the water out of his ears.

Not every risk taker emerges unscathed. On July 26, 20-year-old Eric Richardson, a Cortland High School graduate, jumped into the water. When Richardson did not immediately emerge, his friends thought he was joking, Ken Lansing, Tompkins County sheriff, said. By the time his friends started searching for him in the water and found him, it was too late. Richardson was pronounced dead at the scene. An investigation into his death is still ongoing, Lansing said.

Lansing said Richardson jumped from a site on the west side of the creek that included a swinging rope, and bystanders who witnessed Richardson’s fatal jump reported he “landed wrong.” The rope has since been cut down, Lansing said, to get the message across that jumping is not OK.

On Aug. 21, the scene at Second Dam — also known as Six Mile Creek Dam and 30-Foot Dam — was upbeat and relaxed, including about 20 young people, a dog, a frisbee, a GoPro camera and a few cans of beer. The only remaining evidence of Richardson’s death was a white ribbon tied to the tree that the swinging rope used to be attached to, marking it for trimming.

On any given summer day with fair weather, thrill-seekers flock to the area to jump from several heights into the 12 to 15 feet of water held back by Second Dam, which is just shy of 2 miles away from the Ithaca College campus. 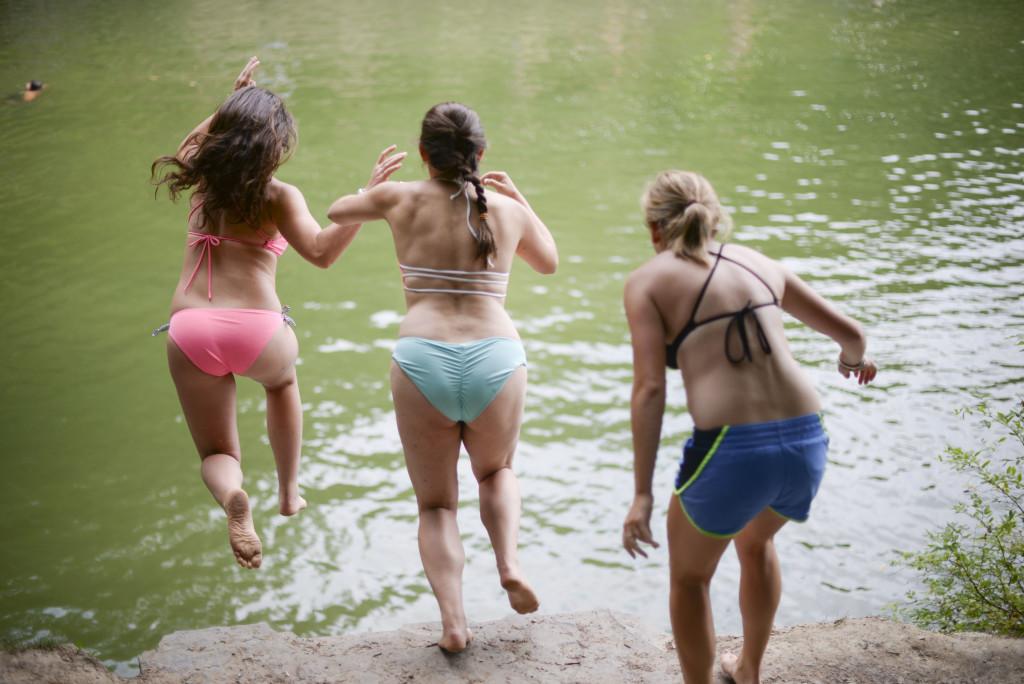 Three friends jump into the water at Second Dam together. TOMMY BATTISTELLI/THE ITHACAN

The built-up water spills in a steady waterfall over the dam wall, and the gorge cliffs rise steeply on both sides, with well-worn pathways leading to ledges that are popular to jump from. The smallest jump is off a small man-made structure covered in graffiti, about 15 feet tall. The largest is a terrifying 80-foot drop from the top of the gorge, past the dam wall and into the pool at the base of the waterfall.

“A risk is taking a chance, and sometimes taking the chance, you win; sometimes you take the chance, you don’t,” Lansing said. “Someone reached out to me and said, ‘He was athletic; he was in great shape — how did this happen?’ Well, it did, unfortunately. It didn’t work for him.”

Not long after Richardson’s death, a young woman fell nearly 100 feet into the gorge in Taughannock Falls State Park July 31 and was rescued. She died the next day from her injuries.

In the summer of 2011 in two separate events, Cornell students Nathaniel Rand and Kendrick Castro drowned while illegally swimming in Fall Creek Gorge. Castro’s death came just a day after his graduation, according to the Cornell Daily Sun.

Addison Hebert, a senior member of the college’s swim team who was swimming at Second Dam with friends Aug. 21, said Richardson’s recent death didn’t change his view of the area.

“I always knew it was a dangerous spot, and I was told as a freshman about some of the hazards here and how to look out for them,” Hebert said. “I feel I have a pretty good grasp of how to be safe here.”

Senior Charlie Morris said he is afraid of heights and doesn’t jump at Second Dam. He also said he is a mediocre swimmer, but coming to Second Dam with members of the swim team, like Hebert, makes him feel more secure.

“I feel pretty safe considering I know that they could save me,” Morris said. “Even if I was stuck to the bottom of the gorge, it wouldn’t be a big deal. Pretty much everyone here has had a lifeguard job, is CPR–certified or can swim with no arms, so I feel pretty safe.”

Morris said he thinks the biggest mistakes students make at Second Dam are submitting to peer pressure and swimming and jumping while under the influence of drugs and alcohol.

Swimming and jumping at Second Dam are illegal. Signs posted at the gorges say there is a maximum fine of $250 for trespassing into the area. 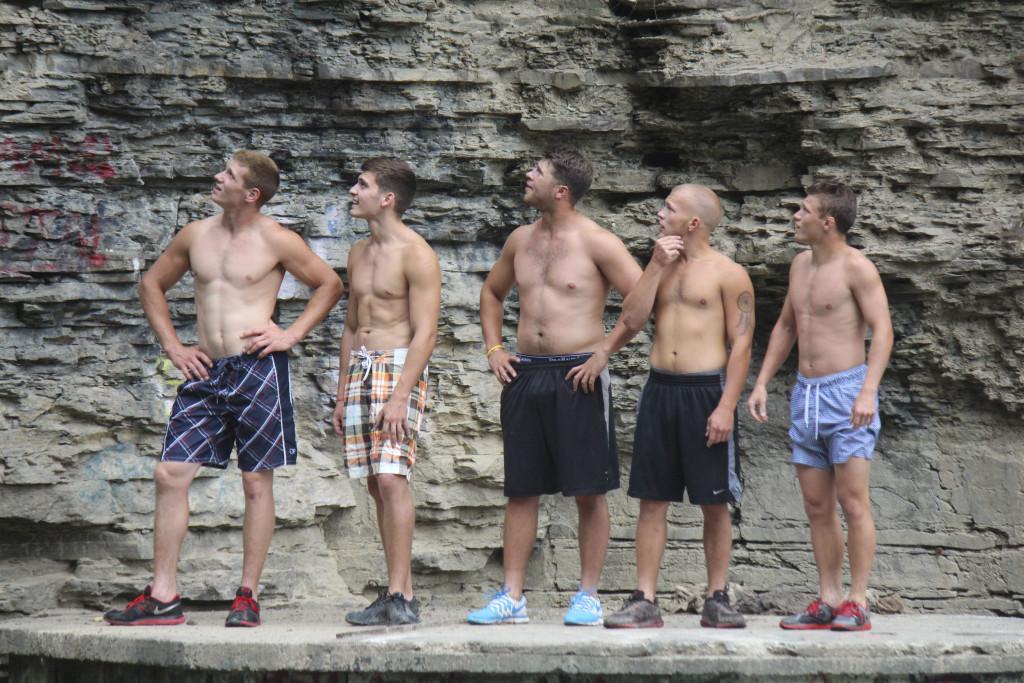 A group of men stand on the top of a man-made structure and watch others jump into the water from higher up. YANA MAZURKEVICH/THE ITHACAN

As discussions around gorge safety gain new traction after Richardson’s death, the future of Second Dam is unclear. Mark Darling, a member of the Board of Public Works and sustainability programs coordinator at the college, said in an email that Second Dam, which was built in the early 1900s, does not meet the New York State Department of Environmental Conservation safety guidelines, and the city needs to decide whether to repair the dam or remove it entirely. For either operation, Darling said, the water will have to be drained.

According to the City of Ithaca Department of Public Works, both Second Dam and Third Dam — also known as 60-Foot Dam or Potter’s Falls Dam — are classified by the NYSDEC as Class C “High Hazard” dams. According to the NYSDEC, this is the only classification in which loss of human life is considered likely if the dam fails.

Darling said via email that Third Dam, which holds the City of Ithaca’s drinking water supply, is scheduled to be reinforced to meet safety guidelines next summer.

Hebert said he would be concerned about the social impacts of removing the dam because of its attractiveness to prospective students.

“One of our favorite traditions is for our captain’s practices before the season starts, we do a run with the team from campus down through some of the trails here, and then end with a quick swim here,” Hebert said. “That’s always been a fun time — been doing that since I was a freshman.”

Accidental injuries at Second Dam and other popular swimming locations in the gorges are frequent, Jamie Williamson, public information officer at the Ithaca Police Department, said. Law enforcement responds to incidents involving injuries in the gorges about every 10 days, and Williamson has seen about a dozen accidental deaths in the gorges during his 10 years on the force, he said.

The costs of a gorge rescue can be exorbitant, Williamson said.

“When somebody jumps in and suffers, let’s say a broken leg … with that there’s about 20 [emergency] personnel that could be involved,” he said. “Maybe a helicopter has to be brought in. People have no idea that that one incident, that could cost $50,000 to the taxpayers.”

He said it’s also difficult for the IPD’s already limited resources to address other crime while so many personnel are tied up in the gorges, and he would like to see jumpers and swimmers held accountable for that use of resources.

“The person that’s [injured] in the gorge — sometimes people think they’re a victim, so they don’t get a ticket,” Williamson said. 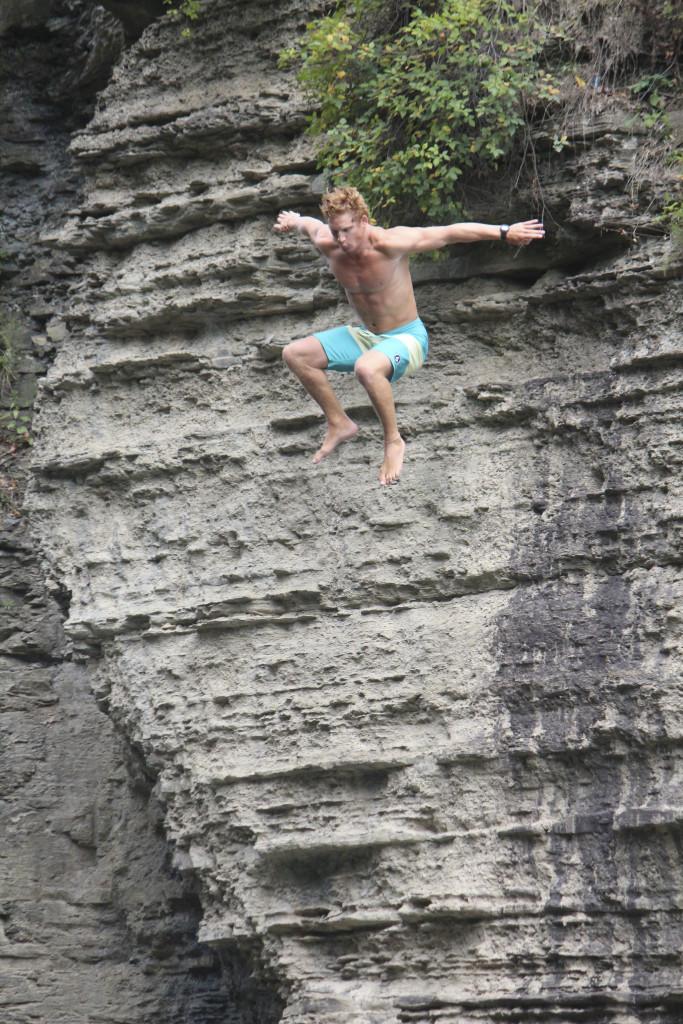 A man jumps from a cliff into the water at Second Dam. YANA MAZURKEVICH/THE ITHACAN

Besides being costly, gorge rescue operations can also prove dangerous to emergency responders. In March of 1986, Sergeant William J. Chapin, who served with the college’s public safety for four years, fell to his death while attempting to rescue two students who had fallen into the gorge in Buttermilk Falls State Park from a closed trail. Chapin was off-duty at the time of the rescue and had been called to assist. He was 25.

Williamson said First Dam, or Van Natta’s Dam, is a part of the IPD’s jurisdiction, while Second and Third Dams fall to the responsibility of the Tompkins County Sheriff’s Department. Lansing said citizen gorge rangers help to patrol the Six Mile Creek area, but they do not have authority to make arrests or issue tickets for illegal swimming and jumping.

Lansing said the sheriff’s department does not have regularly scheduled patrols.

“Patrols are sporadic, at best,” Lansing said. “They’re often reactive and not proactive, when someone calls and says there are a lot of vehicles parked.”

Terri Stewart, director of the Office of Public Safety and Emergency Management at the college, said the gorges are outside of Public Safety’s jurisdiction; therefore, they do not patrol Second Dam or respond to accidents there.

Lansing said college students are a tough demographic to educate about gorge safety because most are absent during the summer when it is most relevant.

Stewart said Public Safety has a limited amount of time to present to students at orientation, and although gorge safety is addressed, it competes with other issues like theft, sexual assault and personal safety.

“Our students are inundated with information, so … if I only have a limited amount of time, what are the top three things, for example, that I would want them to know about their personal safety or property safety?” Stewart said.

In addition, Stewart said safety information is not often at the top of students’ priority lists.

“When you talk about safety and security, sadly, that’s not usually at the forefront of what everybody’s wanting to read about,” Stewart said.

Lansing said as far as involving the college in preventing injuries and deaths in the gorges, the best thing to do is increase community education around the issue.

Lansing, Williamson and Stewart all said Six Mile Creek and the gorges are a community asset and should be enjoyed, but students and citizens need to find alternative places to go swimming.

“I understand, you know. I was young once,” Lansing said. “What I’m saying is you’ve got to grow up at some point in time and realize the risks and the dangers of what you’re doing and that there are safer alternatives.”