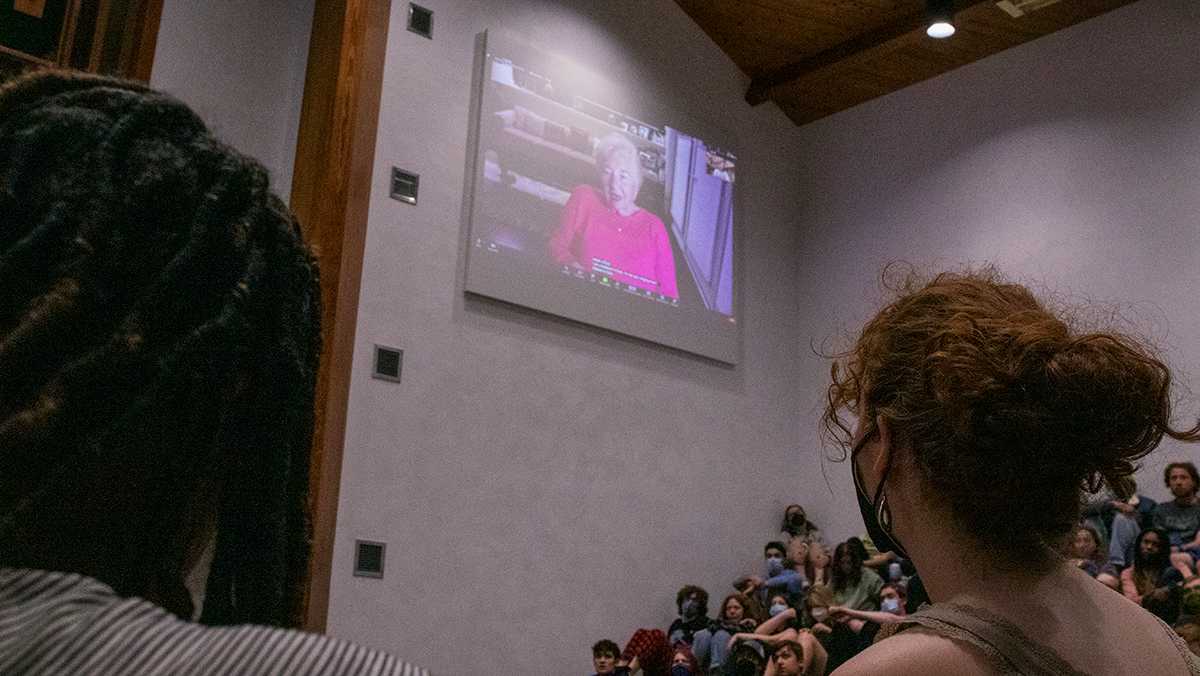 Maggie Bryan/The Ithacan
At the age of 85, Hannah Wechsler is one of the few older adults still alive who survived the Holocaust — and are willing to talk about it. Wechsler has told her story thousands of times — to children, teenagers and college students across America. As of 2020, there are only 400,000 living Holocaust survivors.
By Elijah de Castro — News Editor
Published: May 4, 2022

At the age of 85, Hannah Wechsler is one of few older adults still alive who survived the Holocaust — and are willing to talk about it. On May 3, Hillel at Ithaca College brought Wechsler and her story to about 150 members of the campus community who gathered at Muller Chapel to hear from Wechsler via Zoom.

Wechsler has told her story thousands of times — to children, teenagers and college students across America. Junior Isaac Schneider, president of Hillel at Ithaca College, said that for many members of the campus community, this was the first time that they had heard from a Holocaust survivor. As of 2020, there are only 400,000 living Holocaust survivors.

Junior Julia Ganbarg, vice president for engagement and outreach at Hillel, said she grew up hearing about Wechsler’s life. At Ganbarg’s temple in New Jersey, Wechsler has been a Hebrew school teacher since 1972. Wanting to bring Wechsler’s story to the campus community, Ganbarg said she called Wechsler on the phone and asked her to speak. Ganbarg said Wechsler immediately said yes.

“What was so surreal about tonight was being able to watch all the people in the room hear her story for the first time and see how they were reacting,” Ganbarg said. “She’s an incredible woman. She has an incredible story.”

Wechsler was born in a small Polish town in 1936 to a Jewish family. When the Nazis invaded Poland in 1939, Wechsler said she and her family hid for six weeks in the cellar of a barn with the help of a Polish family. Eventually, neighbors became suspicious and Wechsler’s family was taken by Nazis.

“The place where the Germans collected us was like no man’s land,” Wechsler said. “We were exposed to anybody’s mercy. Anybody who would stop by us could see us, could kill us, could shoot us. Anybody could do anything that they wanted to us.”

Schneider said the event held incredible urgency, as time is running out for people to hear from those who lived through the Holocaust. In the United States, about 50,000 Holocaust survivors are still alive, the youngest of whom are in their late 70s. Many of them live below the poverty line.

“My grandparents are actually Holocaust survivors,” Schneider said. “I think it’s really easy for people, for students, I should say, to get into this idea of ‘the Holocaust happened a long time ago,’ but we’re only 77 years out. … Simply due to age, there are fewer and fewer Holocaust survivors left in the world and a few that are in the business to speak about it because even that is hard. … We are the last generation to have the ability to experience this.”

The Nazis deported Wechsler’s family to the Kraków ghetto, which was one of five ghettos the Nazis constructed to persecute Polish Jews. Wechsler said her mother then snuck out of the ghetto to get falsified documents that could help save Wechsler’s family. Prisoners of Kraków who were caught trying to escape were executed.

“Boys and girls, ladies and gentlemen — if she got caught, she was killed,” Wechsler said. “It was very, very dangerous, but my mother promised my grandparents. [She] said she would help as much as she can to save us. … When she got on a train, one of the Germans saw her and she was extremely, extremely scared. But he was a gentleman and he gave her a seat to sit on.”

Sophomore Madeleine Jimenez said that being able to hear from Wechsler and understand her emotions deepened her understanding of the Holocaust.

“I personally have never heard a Holocaust survivor talk before,” Jimenez said. “All I’ve ever learned from it was basically in high school with the one course I took that talked about it. I didn’t really know a ton about it. So hearing her talk about it specifically was really powerful. … I got emotional.”

While new waves of antisemitism spread throughout Europe, the United States and the Middle East, education on the history of the Holocaust is lacking. Denial of major 20th century genocides like the Holocaust, the Armenian genocide, the Rwandan genocide and the Cambodian genocide are common when there is a lack of education. At Ithaca College, antisemitic incidents have occured as recently as this February, which was met with the “IC Day of Learning: Grappling with Antisemitism” mini-conference.

Although Wechsler’s family were briefly able to survive by posing as Christians in Hungary, they ended up getting caught and sent to the Auschwitz concentration camp. Wechsler said she and her mother were then separated from the men in their family. Wechsler described how she experienced Auschwitz as a 5-year-old, including coming face to face with Josef Mengele, a German physician nicknamed the “Angel of Death” who conducted human experimentation on prisoners.

“Auschwitz was a place that hell could not describe,” Wechsler said. “In Auschwitz I got a new identity — 88987. … It is very hard to explain how the air in Auschwitz was filled with fear, anger and hunger. It was horrible. … Google the name Dr. Mengele, and you will see what that man did with human beings.”

Wechsler credited her survival to her mother, who she said would not give in to the treatment they received while imprisoned.

After Wechsler told her story, she took questions from the crowd. Sophomore Sam Isle asked Wechsler if her experiences during the Holocaust affected her relationship to God and religion.

Isle said that speaking to Wechsler and hearing about her survival deepened his understanding of the affect the Holocaust had on survivors.

“I’ve heard stories of Holocaust survivors many times over and every single time it’s still as powerful,” Isle said. “Every time you hear about what they had to go through and how their childhood was robbed from them you wonder how people could do something that horrible.”