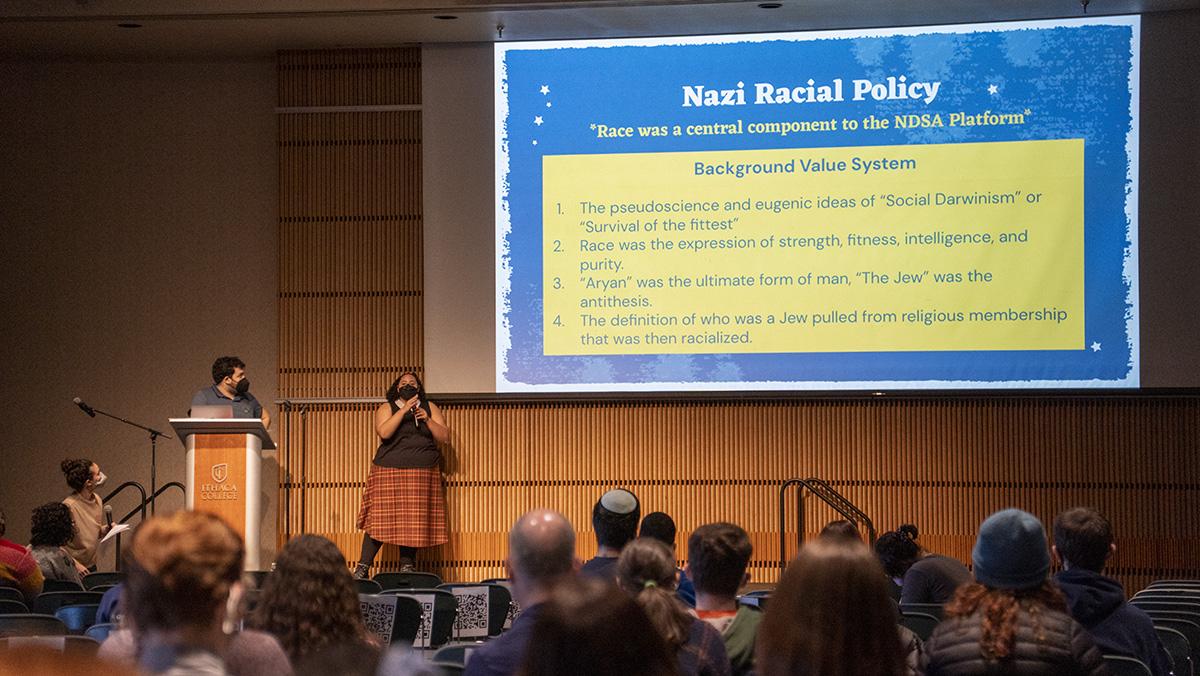 Leila Marcillo-Gomez/The Ithacan
IC Hillel, the Center for IDEAS and the college’s senior leadership collaborated to hold the “IC Day of Learning: Grappling with Antisemitism” from 10 a.m. to 6 p.m Feb. 28 in Emerson Suites.
By Caroline Grass — Staff Writer
Published: March 2, 2022

In between classes, members of the Ithaca College community gathered while organizers handed out blue wristbands printed with the words “Humans against antisemitism, bigotry and hate.” Throughout the day, the campus community engaged in an open dialogue about antisemitism in response to multiple symbols of hate found on campus.

Hillel at Ithaca College, the Center for Inclusion Diversity Equity and Social Change (IDEAS) and the college’s senior leadership collaborated to hold the “IC Day of Learning: Grappling with Antisemitism” mini-conference from 10 a.m. to 6 p.m Feb. 28 in Emerson Suites. Lauren Goldberg, executive director of Hillel and interim director of Religious and Spiritual Life, came up with the idea for the mini–conference as a response to the two swastikas found Feb. 3 and Feb. 8 on campus. Throughout the day, 297 students signed in to the events to learn.

Interim President La Jerne Cornish said the college community needed to use the day of learning to work toward making an environment on campus that combats antisemitic, racist and other threatening ideologies.

“By probing the depths of the ideas that deal with antisemitism by grasping not just the history of it, but also its many contemporary manifestations, we will have the tools we need to identify it and reject it,” Cornish said.

Goldberg compared the spreading of antisemitic hate to the COVID-19 pandemic.

“We talk a lot these days about the significance of being symptomatic and asymptomatic,” Goldberg said. “The swastikas that appeared on our campus were the symptomatic representation of this rising spread of hate. You can carry hate asymptomatically and not even realize that you’ve been infected. But what we’re doing today is like getting a vaccine. It’s not perfect, it’s a bit of a rushed job, but we have to meet the moment that we’re in.”

During the 2020–21 academic year, college students around the country reported 244 antisemitic incidents to an Anti-Demafation League (ADL)-Hillel website initiative, which was an all-time high. Out of 756 self-identified Jewish undergraduate students, 43% reported they experienced or witnessed antisemitic activity in the past year, according to a 2021 campus antisemitism survey from the ADL and Hillel International.

Two swastikas were found in April 2019 on the college’s campus and a student reported a mezuzah — a prayer scroll — was ripped off their door in 2019. The Ithacan previously reported a rise in bias–related incidents and detailed eight antisemitic or hate symbols and words drawn on campus from 2013–18.

Aviva Snyder, campus support director at Hillel International, presented the first event called “Antisemitism 101  – Defining Our Terms.” While the swastika is one of the most prominent symbols of antisemitism, prejudice against Jewish people has predated the swastika. Snyder played a video from Hillel International and the ADL, that said over a quarter of the world’s population believes antisemitic stereotypes to be true. The video also explained that while Jews make up 2% of the population in the United States, they make up 60% of all hate crimes directed at a specific religious group, and 13% of hate crimes in general.

“So there is a long history of misappropriating that Jews or greedy Jews are money hoarding, things like that,” Snyder said. “That we’re dishonest, that we’re secretly hiding an identity. … These are tropes, you may see or have heard.”

On an episode of ABC’s “The View” Whoopi Goldberg said the Holocaust was not about race, but instead a conflict between two groups of white people. However, antisemitism is at the core of racist ideologies like white supremacy and white nationalism.

Whoopi Goldberg apologized for her comments but was suspended from the show for two weeks.

The audience discussed the idea of race as a social construction that changes over time and space. Hollies said that even though race is constructed, it is still real and affects people’s lives.

“So race is something that you might have an intrinsic feeling about yourself, how you view yourself,” Hollies said. “But it doesn’t always mean that feeling is going to match how other people feel, it’s a conversation between two people, right?”

Junior Isaac Schneider, president of Hillel at Ithaca College, said he has seen many questions circling campus about what a swastika means. The swastika historically has been used by many cultures as a symbol of well being, but through the use of the symbol by the Nazi Party, today a swastika is widely seen as a hate symbol that promotes white supremacy and antisemitism.

Modern antisemitism was facilitated by Social Darwinism and theories of racial superiority, according to a report from the ADL, but discrimination against Jewish people dates back centuries. Hostility toward Jewish people started as a conflict between religious beliefs during biblical times, and a new form of institutionalized discrimination emerged in the Middle Ages and continues to present day.

Schneider said that it is important to acknowledge how emotional the symbol is for many people and that he was thankful for all the students and faculty that attended the event learn how students are affected by antisemitism on campus.

“I’m the grandchild of Holocaust suvivors, not the great-grandchild, [it’s] not some ancient generation,” Scheider said. “So, it’s not a far removed thing. … It still affects our students directly.”

Erin Schrode, activist and social entrepreneur, said she often gets requests from campuses after a spike in antisemitism or following a hate crime. She said she wished these dialogues happened all the time, not just after antisemitic incidents occur, but said she had never seen a college mobilize a symposium as quickly as the college did.

“For me, that shows that this campus is taking students seriously … and is committed to educating the whole student body,” Schrode said. “I thought they did a really beautiful job … in what they put together in terms of diversity and perspectives and speakers’ voices which I think is really important because these topics are messy and nuanced and fragmented and divisive and diverse.”

Annette Levine, associate professor in the Department of World Languages, Literatures, and Cultures, presented about intergenerational Holocaust trauma and talked about her research on second-generation Holocaust survivors in Argentina and Brazil. Levine researched her own family history because her grandmother and parents were Holocaust survivors and she talked about how stories of loss and pain stay with families through generations.

“An event that may seem to have happened before ones time is still present in the fabric of our everyday life,” Levine said. “We’re increasingly surrounded by fractured lives and families and their stories of loss and survival are also being embodied and inherited by their descendants.”

Uriel Abulof, associate professor at Tel-Aviv University and visiting professor at Cornell University, presented about the Israel-Palestine conflict and presented four words to better understand where antisemitism started. The words were dread, doubt, defiance and demonization, and he talked about the question of power as well.

“The starting point for any investigation of antisemitism should not be why does this irrational belief appeal to other people, but why does it appeal to me?” Abulof said. “If one asks this question … it may be possible to find out what’s underneath.”

Freshman Matthew Scott said he came to the event because part of the value of being in a college community is confronting complex ideas and facing misconceptions about issues like antisemitism. Scott was with junior Alexa Chalnick when she found the first swastika drawn in condensation on Baker Walkway.

“I kind of was dismissive of [the swastika] … but when [Chalnick] addressed what it meant to her and to our Jewish peers I realized the significance of the issue,” Scott said. “I think that this event goes above and beyond what I would have perhaps expected as a response.”

The conference ended with Schrode’s keynote speech, “On White Supremacy, Hate Speech, And Neo-Nazis.” She talked about her experience with hate directed toward her as a Jewish woman and said untrue sterotypes and beliefs lead to antisemitism and violence.

“How many Swastikas is too many?” Schrode said. “How many tropes? How many slurs? Why is it that people don’t respond when one crime is committed? Because I am not happy to be here. … Trust me, I wish that no symposium like this was ever needed, but the fact is … this is a slippery slope. Rhetoric, actions and symbols lead to violence and danger and division.”

Schneider said Jewish students have been asking for activism like this event on campus for years. He said he felt like students were finally being heard by the college and he was hopeful for the future.

Hillel is hosting another educational event where Jessica Cooperman, a visiting professor of religion studies from Muhlenberg College, will be speaking about the origins of antisemitism and what it looks like currenly at 7 p.m. March 3 in Klingenstein Lounge.

“You know, this doesn’t end in one day,” Schneider said. “I’m really truly hopeful that this [Day of Learning] is the start of a bigger movement.”

Tri-Council Statement in support of the IC Jewish Community, Feb. 23, 2022