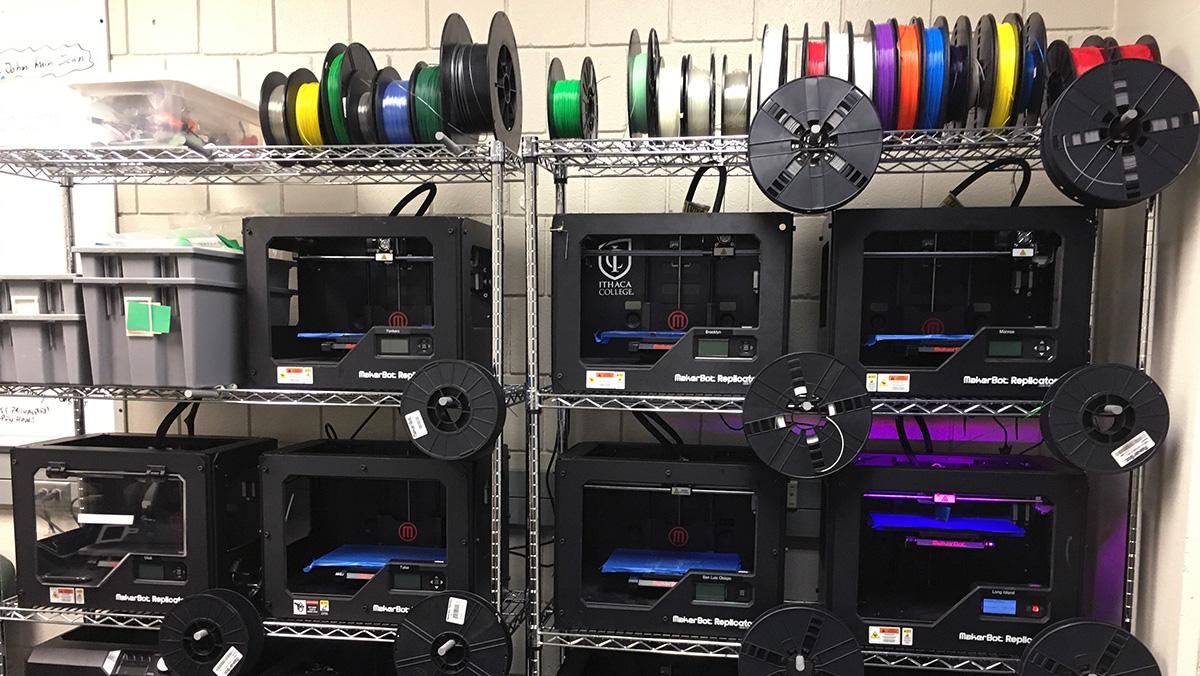 A steering committee of faculty members from the School of Humanities and Sciences purchased nine new 3-D printers over the summer and consolidated the school’s existing fleet of five 3-D printers from two separate buildings into a new lab in the Center for Natural Sciences. The new lab is now the largest centralized area for 3-D printing on Ithaca College’s campus.

The college acquired its first 3-D printer — a MakerBot Replicator 2 — in December 2013, which was later joined by a larger MakerBot Replicator Z18 printer in Fall 2014. Now, the new lab, located in CNS 207, is equipped with the 3-D printers, computers and 3-D scanners for students to create designs to print. The lab is set up and in use for certain classes; however, it is not open to the campus community at this time.

The H&S lab is an expansion of a pilot program that was initiated last fall by the steering committee, facilitated by Nathan Prestopnik, assistant professor in the Department of Computer Science, and Roy Westwater, instructor in the Department of Computer Science. The pilot lab, located in Williams Hall, included the original two 3-D printers as a way to explore interest in 3-D printing on campus.

Michael Rogers, professor in the Department of Physics and Astronomy, joined the committee last spring and added three 3-D printers from in his physics lab to the new, consolidated area in CNS, he said.

The printers that were purchased this summer by the committee are all MakerBot Replicator 2 models. Rogers said the brand was chosen because of its reliability. Before this summer’s purchase, the steering committee had two Replicator 2’s. Now, they have 11 and are trying to purchase a 12th. Rogers said having a lab composed of mostly the same model of printers makes maintenance and instruction on how to use the equipment significantly easier.

“I have had very good luck with the MakerBot Replicator 2,” Rogers said. “It’s very easy for us to do work on it if something breaks, just the way it’s designed. We have the resources here.”

Additionally, he said since the first MakerBot Replicator 2 they purchased is now an older model, the committee was able to acquire the nine new printers at a discounted rate. Rogers said the MakerBots were purchased from eBay and Microcenter for approximately $950 per machine. The funding came from the physics department and Rogers’ research account.

Within the year, Rogers said, the committee is planning to build a website for the new lab to help students and teachers schedule times to use the lab.

Benjamin Bouricius, a senior physics major, has worked with Rogers for the past two years on 3-D printers. He said he is also working on writing an instruction manual for the lab to help spread its appeal beyond science majors.

“It’s a lot of physics majors working here,” Bouricius said. “Ideally, I’d like to see it opened up to the entire college, just because who knows what kind of cool projects might be able to come through here.”

Last year, David Salomon, assistant professor in the Department of Art History, used the two printers that were in Williams Hall for his architecture class of eight students. He said the new lab, which has a much larger capacity, would be more accommodating to his classes in the future. Salomon said 3-D printing is particularly helpful to architecture majors because they sometimes need to create 3-D models of their blueprints.

“I think that really gives them a different insight into the relationship between drawing and making things,” Salomon said. “It is really fantastic — it augments the other process we use where you draw something and make it by hand with scissors and glue and paper and wood.”

Now that the lab is set up, the steering committee is working on the logistics of how the lab will operate, Rogers said. There is still no formal process for how students and teachers can reserve the lab for use, but that will soon change once the website is up and the steering committee has worked out the rules, he said.

“We have the hardware. Now it’s just the process,” Rogers said.