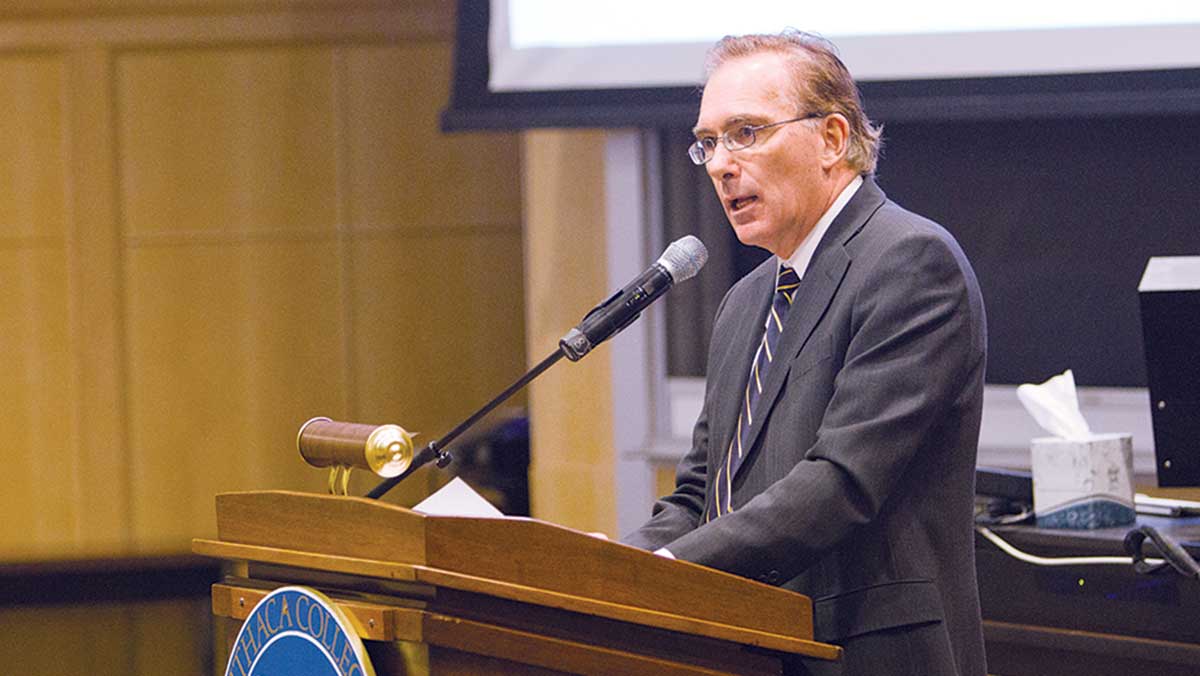 The Ithaca College administration took a different approach to the biannual All-College Meeting on Aug. 18. Instead of the traditional meeting structure consisting of updates on the budget, enrollment data or upcoming initiatives, President Tom Rochon focused on two “commitments” to the campus community: diversity and inclusion, and shared governance.

Staff, faculty, administrators and invited students attended the meeting; however, the press was not invited.

Thomas Swensen, professor and chair of the Department of Exercise and Sport Sciences and chair of the Faculty Council, said the Shared Governance Task Force presented information relating to its progress in drafting a proposal for how shared governance should be implemented at the college. The task force was created in October 2015 and includes members from each campus constituency — students, faculty, staff and administrators.

At the meeting, representatives from the task force said a draft of its proposal will be made public during the fall semester and following this, it will hold listening sessions to gain input from the campus community.

After revisions are made, the draft will be sent to the Ithaca College Board of Trustees for final approval.

In addition to updates on shared governance, a significant portion of the meeting was devoted to talking about diversity and inclusion throughout the campus community, Rochon said. However, Swenson said no new initiatives were revealed at the meeting. Roger Richardson, associate provost for diversity, inclusion and engagement and interim chief diversity officer, declined a request for additional comment; however, he did release an update on the status of last fall’s diversity initiatives via Intercom on Aug. 17.

“We can plan book readings … we can bring in guest speakers, we can arrange workshops … but the question is, are we going to take the individual initiative to engage, in positive ways that are going to help move the institution, to become the institution that we want it to be?” Richardson said about diversity and inclusion during the meeting, according to a release by the college.

Brian Dickens, vice president for human resources, said he will work with Richardson throughout the year on diversity and inclusion initiatives, such as the faculty and staff diversity workshops. He also said he will work to hire a permanent chief diversity officer during a search this year.

“[HR] has a responsibility for diversity for our workforce. … It was a natural conversation for me when I arrived to say, ‘Doc, how can we collaborate and have a more strategic focus in terms of how we go about getting the work done?’” Dickens said.

Rochon said he spoke at the meeting about keeping the tuition levels down over the course of his time at the college. In an Aug. 19 conversation with The Ithacan, Rochon said he did not think the cuts from last year — staff cuts and study abroad program cuts — diluted the quality of education for students.

“The quality of education at Ithaca College has never been higher than it is today,” Rochon said.

He cited ICNYC and the London Center as added opportunities for students and said the staff positions being cut were “back–office positions,” not positions that had to do with residential life or student learning.

Dickens also said that at the meeting, he discussed continuing efforts to “right-size” the college staff and faculty. However, he said the college is not cutting any additional staff or faculty positions at this time. The administration will continue with last year’s policy of leaving some vacant positions empty, depending on what they are.

“Any organization has to continually look at workforce versus strategy,” Dickens said. “Are we right-sized? Are we aligned? … Can we reorganize to be more efficient … and review the work being done?”

What was not included in the meeting

Rochon said some topics that are usually included in the meeting were left out this year.

Items that were not included in the meeting were enrollment numbers for the year, budget information, reaccreditation information and updates on the current presidential search. The college published links to this information on its website.

He said the focus for this meeting, instead of using slides on the projector and updates from each vice president, was to foster a dialogue and community discussion.

“The entire meeting was focused on being much more engaging of the audience through question and answer,” Rochon said. “Our focus was on dialogue and engagement, and in past years … there was much more of a focus on several vice presidents standing up and giving kind of update reports.”