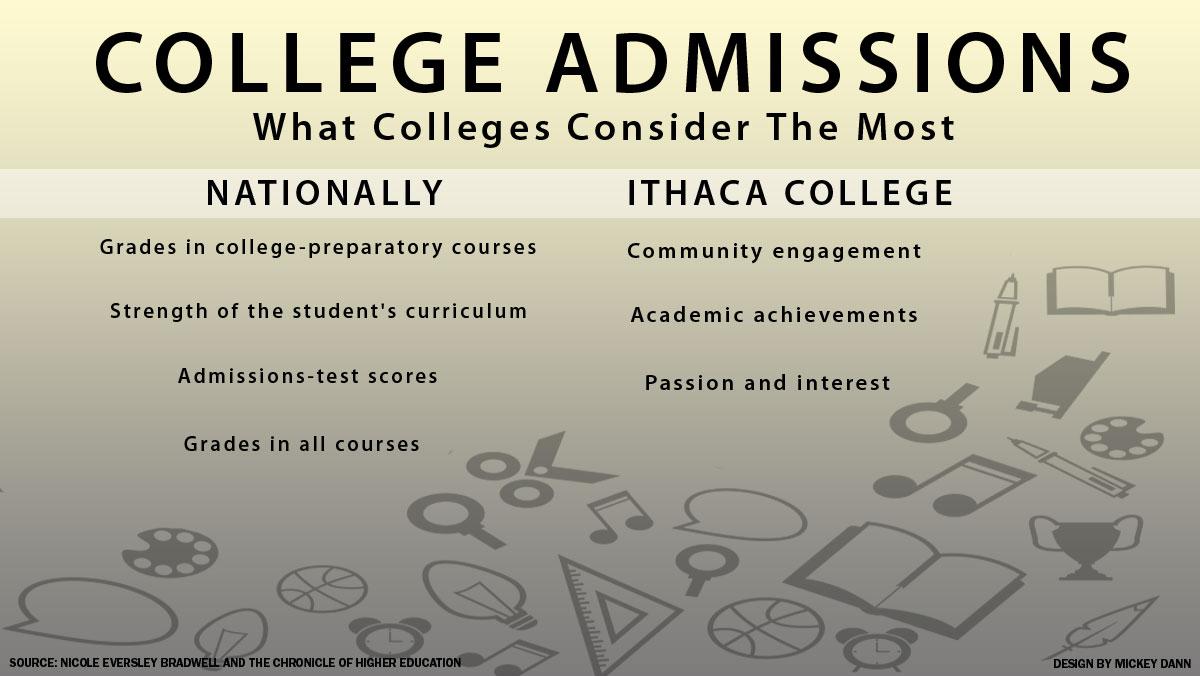 A recent study found that high school grades are still valued the most by college admissions offices despite national efforts to move away from this achievement-based acceptance criteria. However, Ithaca College evaluates its applicants differently when determining if they will be admitted.

The National Association for College Admission Counseling reported grades in college prep courses, like advanced placement and international baccalaureate classes, to be the most important academic factor admissions officers look for in a student’s application. The next three most important factors are grades overall, strength of the student’s curriculum and standardized test scores. While the college considers these academic achievements, Nicole Eversley Bradwell, director of admissions, said the Office of Admission looks primarily at the well-roundedness of each applicant.

Bradwell said the college chooses to look at a more holistic view of each applicant because it will give the office a better sense of whether or not the student is a good fit at the college.

“We look at the broader scale,” she said. “We look at academic strength and strength of the courses, but also at involvement outside of school.”

This type of holistic review strategy has sparked a national conversation about how students should be admitted to college, given the criticism that college admissions are too achievement-oriented. Alison Cashin, director of Making Care Common at the Harvard Graduate School of Education Research, has been working on the Turning the Tide initiative, which encourages colleges to evaluate their students on more than their academic achievements.

Cashin said Turning the Tide focuses on the idea that schools are emphasizing the importance of personal achievement, community engagement and contributing positively to society, in addition to academic achievement.

Gerard Turbide, vice president for enrollment management, said the college reaches out to students as much as possible before choosing whether or not to accept them.

“I would characterize the enrollment strategy at IC in that we are in a constant effort to build relationships with students who will be a good fit,” Turbide said. “That involves constantly reaching out to students and getting them to visit and interact with us so that we really know them.”

Bradwell said the college is set in a very community-based location in Tompkins County and that admissions officers are looking for students engaged in their communities.

“It’s very important to see how the student has been a part of a residential community because of where Ithaca College is located,” said Eversley Bradwell.

Another aspect of the college’s admissions mantra involves the test-optional policy, implemented in 2012, which means that the college does not require students to submit SAT or ACT scores. Becoming test-optional did not affect the quality of applicants, Turbide said, citing follow-up research.

“When deciding to be test-optional, we performed a study and found there was a much more positive correlation between a college senior’s performance and grades in high school, rather than their score on the SAT or ACT test,” said Turbide.

The college is one out of about 870 colleges and universities that are test-optional across the United States, according to the Washington Post.

“Allowing students to choose to send scores lets them put their best foot forward. They are in charge of their own academic profile, and actually hearing from the student what they want to share is powerful,” Bradwell said.

Freshman Jocelyn Hewitt said she felt that getting to choose whether or not to send in her standardized test scores was a deciding factor when choosing the college. Though her test scores were poor, she said, she felt she had strength in other areas of her application.

“My ACT scores were not that great, so just being able to send in my grades over four years and my extracurricular activities let me not have to worry about my test scores and how they would represent me as a student,” Hewitt said.

Freshman Penny Smith said even though she did well on her standardized tests, she still is still in support of schools being test optional.

“I know for a lot of people, standardized tests aren’t really an overall good measure of your cumulative IQ,” Smith said. “There are so many more factors that go into determining a student’s success rate.”

Junior Ashley Cohen said she believes that all the stress in high school to have a perfect application isn’t worth it. She said that being judged based on grades and scores in high school can also put added stress on the student who is already doing everything they can to look like the “perfect child.”

“I did so much in high school that I did not care about and that would often stress me out because I knew it was what colleges would want to see,” Cohen said. “I felt the pressure to take all of the AP classes and such to have a higher chance at my school of choice.”

There are some students, like junior Priya Sethi, who do believe standardized test results should be required.

“Personally, however, I think schools should need tests to get a feel of how students coming in will be academically,” said Sethi.

Admissions will no longer host overnights

Ithaca College has enrolled about 200 more students in the Class of 2017 than it originally projected in May, causing residence halls to exceed their capacities and some departments at the college to accommodate more students than anticipated.