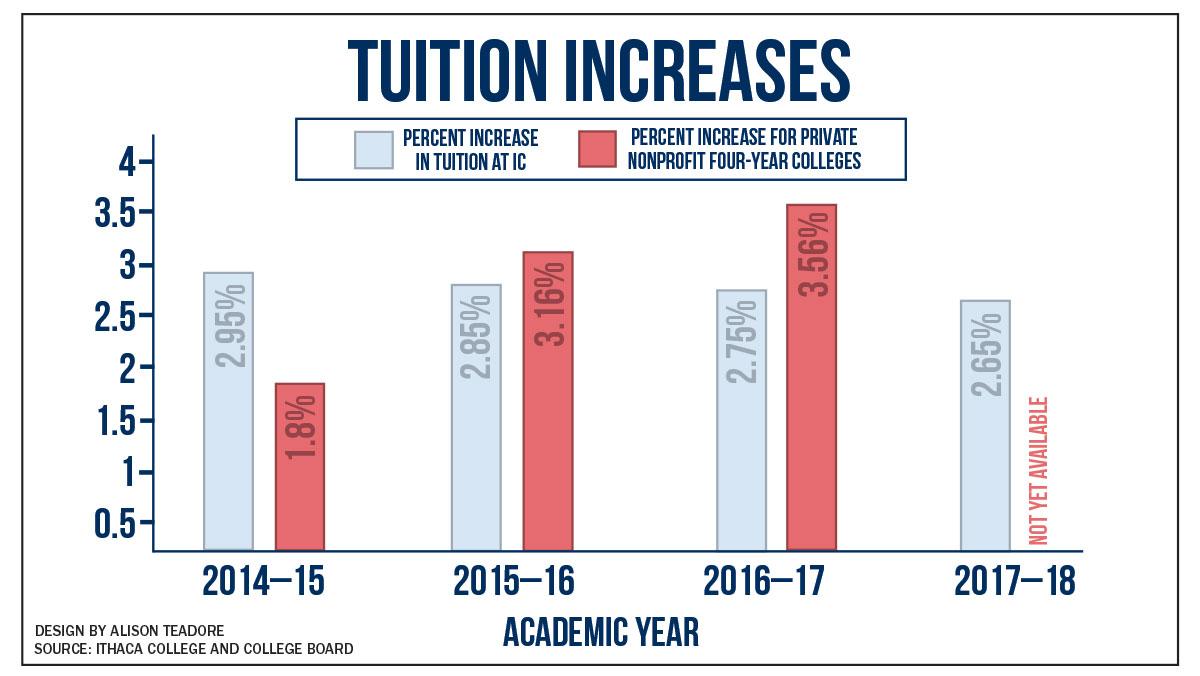 The Ithaca College Board of Trustees has approved the revenue parameters for the 2017–18 fiscal year, which include historically low increases in tuition, room and board, and the highest amount of institutional financial aid given.

“For the last seven years, I’ve been committed, very publicly, that the college will continue annually to reduce the rate of tuition increase as an important move to keeping the college as affordable as possible for students,” President Tom Rochon said. “Even though tuition is going up from year to year, I take great pride in the fact we’ve pushed that rate of increase down to a fairly minimal level.”

Rochon said the college’s Strategic Sourcing initiative, as well as the college’s strategic workforce analysis that led to a cut of staff positions, paved the way for the low percentage increase to be possible.

“We’ve had a program of very carefully targeted cuts in the number of staff over the last years as well as a program of reviewing our contracts with providers of goods and services and making sure we’re getting the most advantageous terms,” he said.

The announcement of these figures came almost four months earlier than in the past due to the change in the filing date for the Free Application for Federal Student Aid, according to the announcement. With the FAFSA’s opening Oct. 1, three months earlier than in the past, the college made the data for the upcoming year’s tuition available sooner by separating the revenue budget process from the operating expense budget process.

“The whole purpose — the goal of this is — to allow students and families the opportunity to evaluate college options with an understanding of their financial resources,” said Janet Williams, interim vice president for finance and administration.

Rochon said it’s always hard to know whether a student would not have come to the college if tuition were slightly higher. However, actual tuition dollars after financial aid have only increased 1.5 percent over the last seven years, compared to 4.5 percent in the 20 years before that. This accounts for $4,500 per student, he said.

Raising the aid amount could help the college be competitive against other schools in the area and attract more students by discounting tuition, said Tom Swensen, chair of the Faculty Council and professor and chair of the Department of Exercise and Sport Sciences.

“We’re in the Northeast, and the demographics are such that we have to compete more ardently with many other schools to try and reach the class size that we think we need to be at in order to remain viable,” he said. “So the college is trying to stay competitive with other schools so that we can build the best possible class that we can.”

Junior Alyssa Mendelsohn said as a student, the fact that the increase was lower than in year’s past did not have much of an effect on her.

“I don’t think it makes that much of a dent in the debt that I’m going to be dealing with for a large chunk of my life. … I guess it’s a sign that we are heading in the right direction, but I don’t think it’s something that’s tangible enough for me to feel or be affected by,” she said.

The rest of the 2017–18 budget will gain final approval at the board of trustees meeting in March 2017.

A proposed fundraising campaign by the Division of Institutional Advancement aims to raise $150–200 million by 2020 to go toward the priorities of Ithaca College’s strategic plan, IC 20/20.