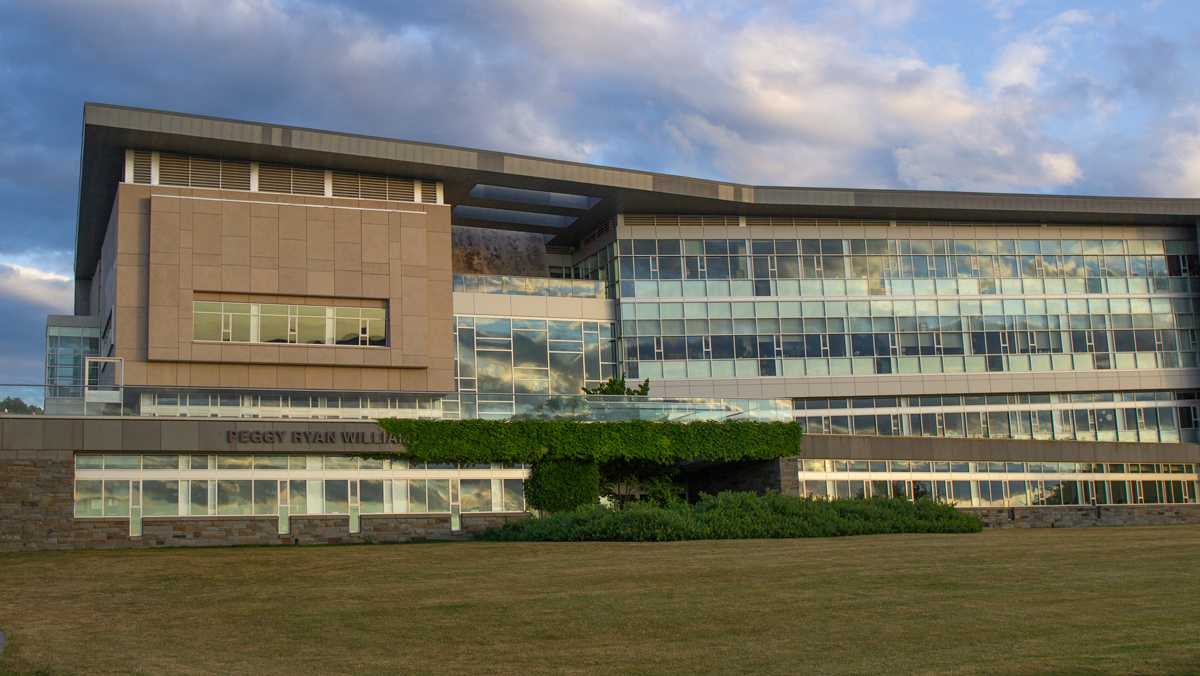 Ash Bailot/The Ithacan
Ithaca College will not disclose the salaries of administrators for the 2020–21 fiscal year. The latest salary information available is from the 2018–19 fiscal year, as reported in the federal Form 990.
By Madison Fernandez — Editor in Chief
Published: October 29, 2020

Ithaca College President Shirley M. Collado has publicly said that she and other members of the administration have elected to reduce their salaries for the 2020–21 fiscal year. However, amid the deep faculty and staff cuts and concerns from the campus community regarding transparency, the college is not disclosing administrators’ salaries.

In an April 9 message to faculty and staff, Collado wrote that she, members of the Senior Leadership Team (SLT) and some direct reports, including deans, associate and assistant provosts, associate vice presidents, directors and executive directors, voluntarily reduced their salaries for the 2020–21 fiscal year. The message did not specify how many individuals took the reduction nor how much the reductions were. The amount from the reductions will go toward institutional financial aid, according to the letter.

“Regardless of how long we have to manage the impact of this public health crisis, we know that we will inevitably have students who are returning to the college in the fall with more financial need and a different set of financial circumstances, both for themselves and for their families,” Collado wrote in the message. “This decision affirms our deep commitment to the success of the college and our students.”

Collado’s message about the SLT’s salary reductions came six months before the college’s announcement regarding its plans to cut approximately 130 full-time equivalent faculty positions in line with Ithaca Forever, the college’s strategic plan, and the Academic Program Prioritization process. La Jerne Cornish, provost and senior vice president for academic affairs, said that the resizing process was supposed to take place over four years but that the COVID-19 pandemic accelerated the college’s need to eliminate positions.

Since Cornish made the announcement about the cuts in early October, members of the college community have raised concerns regarding the timeline of the cuts. The Academic Program Prioritization Implementation Committee and the Academic Program Prioritization Advisory Committee will submit recommendations about which programs will be discontinued, consolidated, reorganized or grown by Dec. 31. Collado and Cornish will make decisions about the programs by the end of February 2021.

When asked to clarify members of the SLT’s current salaries, Dave Maley, director of public relations, denied the request.

“As has been practice, the college does not disclose any individual’s compensation, other than what is reported in IRS Form 990,” he said via email.

The college’s SLT is not alone in taking voluntary salary cuts amid the COVID-19 pandemic. Salary reductions in the range of 10% to 20% are common, although some have been as high as 30%, according to Forbes. In April, Stanford University’s president and provost said they would each take a 20% pay reduction and other senior administrators would have 5% to 10% pay cuts, according to the Palo Alto Daily Post. The University of Oregon’s president took a 12% pay cut and each of the university’s vice presidents and athletic director took a 10% salary reduction, according to The Register-Guard. Those reductions at the University of Oregon were set to last for at least six months but may be extended through the end of the 2020–21 academic year. Harvard University’s top three leaders cut their salaries by 25% in April, according to the Washington Post.

In the April message to faculty and staff, Collado wrote that Ithaca College is unable to offer salary increment increases for the 2020–21 fiscal year in light of the economic impacts of the COVID-19 pandemic. In June, the college announced that it will not contribute to staff and faculty retirements this year. In an Oct. 19 email to members of the campus community, Collado and Cornish said that since March, 264 staff members have been impacted by furloughs, position eliminations or reductions in hours.

Because the college is a nonprofit institution, it is required to file the federal Form 990, a document that outlines the organization’s financial activities for the fiscal year. Form 990s are due on the 15th day of the fifth month following the end of the organization’s taxable year, according to the IRS. The college’s fiscal year is from July 1 through June 30 of the following calendar year, meaning the current fiscal year will end on June 30, 2021. This change was made beginning in the 2019–20 fiscal year. The most recent Form 990 from the college documents the 2018–19 fiscal year, when the fiscal year went from June 1, 2018, to May 31, 2019.

Bill Guerrero, vice president for finance and administration, earned a reportable compensation of $126,041 in the 2018–19 fiscal year, starting from July 2018 when he began in his position at the college. A further breakdown of his compensation, including retirement and deferred compensation and nontaxable benefits, was not listed on the form.

Because other members of the SLT, including Hayley Harris, vice president of the Office of Human and Organizational Development and Planning; Laurie Koehler, vice president for marketing and enrollment strategy; Wendy Kobler, vice president for institutional advancement; and Chief of Staff Odalys M. Diaz Piñeiro, began their positions at the college after the 2018–19 fiscal year, their salaries are not available in the latest Form 990. When asked if the college would disclose their salaries, Maley declined.

Collado said she is proud of the members of the SLT for taking a salary reduction in the interest of benefitting student financial aid.

“At this historic time in our nation and at our college, I take great pride in being surrounded by a group of leaders from across the campus who have voluntarily taken a salary reduction in order to support our students,” Collado said via email. “Everyone who works at IC contributes greatly to this institution, and everyone has their own personal circumstances they need to take into account at this time as to if and how they may make a financial contribution.”

According to the 2018–19 Form 990, the top earner at the college during the 2018–19 fiscal year was Nancy Pringle, interim vice president for legal affairs, general counsel and secretary to the board of trustees, with $662,883. At the time, she was executive vice president and senior advisor to the president but retired in June 2019. The other top earners included Collado, followed by Sean Reid, dean of the School of Business, with $403,272. Brian Dickens, former vice president of the Office of Human Resources, left the college in July 2018 and had a total of $359,961. Chris Biehn, former vice president for institutional advancement, rounded out the top five earners with $312,200.