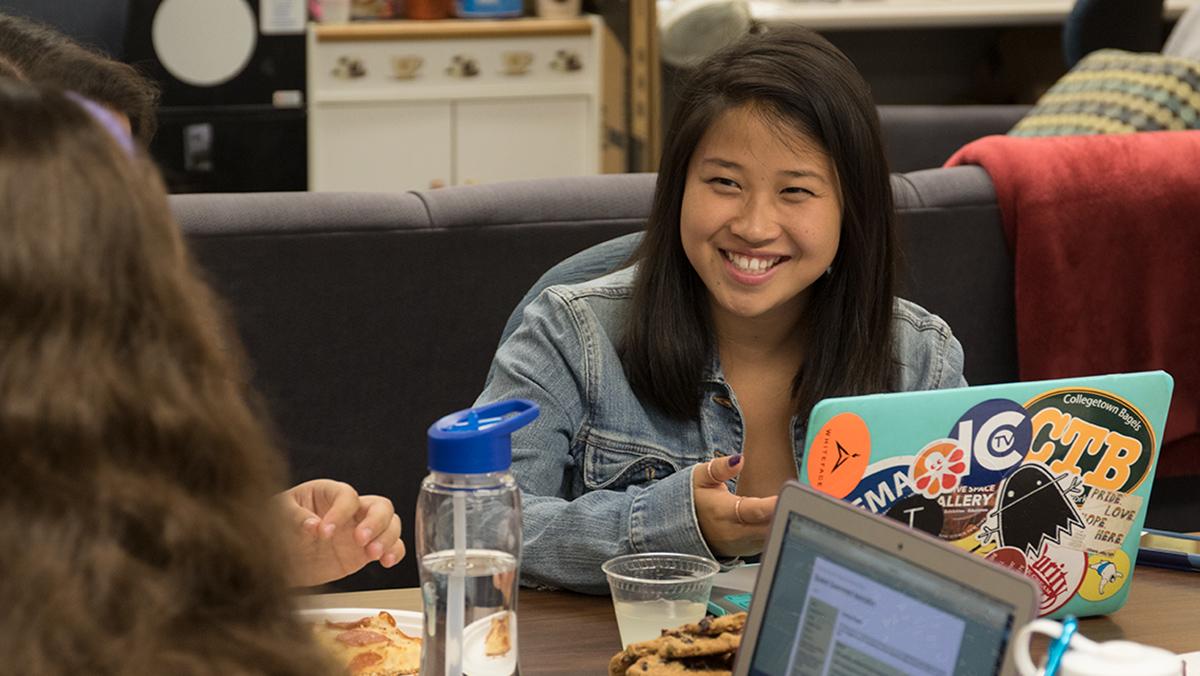 Fernando Ferraz/The Ithacan
Junior Elena Haskins leads a Human Expression Through Arts Resident Development program meeting in the Student Activities Center Sept. 27. Haskins said to her, volunteering is not simply a way to fill out a resume, but her interest stems from a sense of duty to give back and a self-realization about privilege.
By Ben Kaplan — Contributing Writer
Published: September 27, 2016

One afternoon at the MacCormick Secure Center in Brooktondale, New York, after a rhyme-off with the IC Beatbox club and the Human Expression Through Arts Resident Development (HEARD) program, a young man — a resident of the prison — approached junior Elena Haskins. He had attended a number of the organization’s programs and told Haskins that he was inspired to find a way to go to college, something he had never thought about previously.

Haskins, the president of HEARD, said she had never been in a prison before coming to college. She said she had never known anyone who had gone to prison. But while working with HEARD — an on-campus organization that seeks to give incarcerated youth opportunities to express themselves through creative arts — she received insight into a world she previously knew nothing about.

“It’s really hard to explain what the experience is like … You have to go there,” Haskins said. “You have to meet the people to really understand their stories. You meet them as humans.”

Student volunteers partner with other organizations, both on and off campus, to bring performances and workshops to the residents of the MacCormick Secure Center, a secure residency for men between the ages of 14 and 20 who have been convicted of mostly violent crimes.

Haskins’ involvement in community service stretches beyond HEARD. She is also a part of the Leadership Scholar program, a tutor for the Ithaca Youth Bureau, a member of the Ithaca Achievement Program, a graphic designer for Cayuga Dog Rescue and a recent volunteer for the Tompkins County Society for the Prevention of Cruelty to Animals.

To her, volunteering is not simply a way to fill out a resume. She said her interest stems from a sense of duty to give back and a self-realization about privilege.

“I have a lot of opportunities and support, and I know that a lot of other people don’t have those opportunities, so I want to be able to help and contribute as much as I can,” she said.

Haskins also said she believes community volunteerism is a two-sided coin — the recipients are not the only ones who benefit from community services. The experiences and relationships that result from being involved in another community can provide individuals with opportunities for growth and introspection, she said.

“It is so valuable to be able to meet new people and listen to their experiences,” Haskins said. “There’s so much power behind storytelling and just hearing directly from people who have encountered things that you can’t learn from a book or a movie.”

Art has always been a large part of Haskin’s life. However, she said she lost track of it because of the busyness of college. After seeing a poster for HEARD that advertised an opportunity to get involved with creative arts, Haskins was inspired to join. She said she felt that she had something to offer and that it could help bring art back into her life.

“Growing up I did a lot of theater, which helps when we do improv activities,” Haskins said. “I did chorus and all these activities, and that is translating through the projects that we’re working on. And just being able to share that with other people is enjoyable.”

Michele Lenhart, director of student leadership and involvement in the Office of Student Engagement and Multicultural Affairs, has worked closely with Haskins since she was a freshman, when she met her through the Leadership Scholars program. Through their work together, Lenhart has seen Haskins’ passion for community involvement grow.

“As a leadership scholar, part of what people work on is a community service project every semester that they get to choose,” Lenhart said. “Elena dove right in and definitely wanted to work on things that had a bigger-picture view and wanted to work with an organization that was committed to serving people.”

Sophomore Theresa Landez, vice president of HEARD, said that in Haskins’ first year as president, her leadership and work ethic stood out in her interactions with volunteers and residents.

“You’ll notice that when Elena is leading a group of people, she has true command over the room, but in a relaxed way that makes everyone feel equal and comfortable,” Landez said. “Without her leadership and guidance, none of the amazing work we get to do would happen.”

In the future, Haskins said, she would like to continue reaching out to new volunteers with new talents so HEARD can increase the amount of residents the group reaches with its activities.

“This year we are trying to do more on-campus things because a lot of people don’t really know who we are,” Haskins said. “We want everyone to be a part of what we are doing. The only way to really understand something is to be a part of it.”

Juvenile voices are HEARD through the arts

A few days before the official move-in day, about 200 incoming Ithaca College freshmen come to campus early to participate in Jumpstart, an annual early arrival program geared toward easing the transition into college and community service.