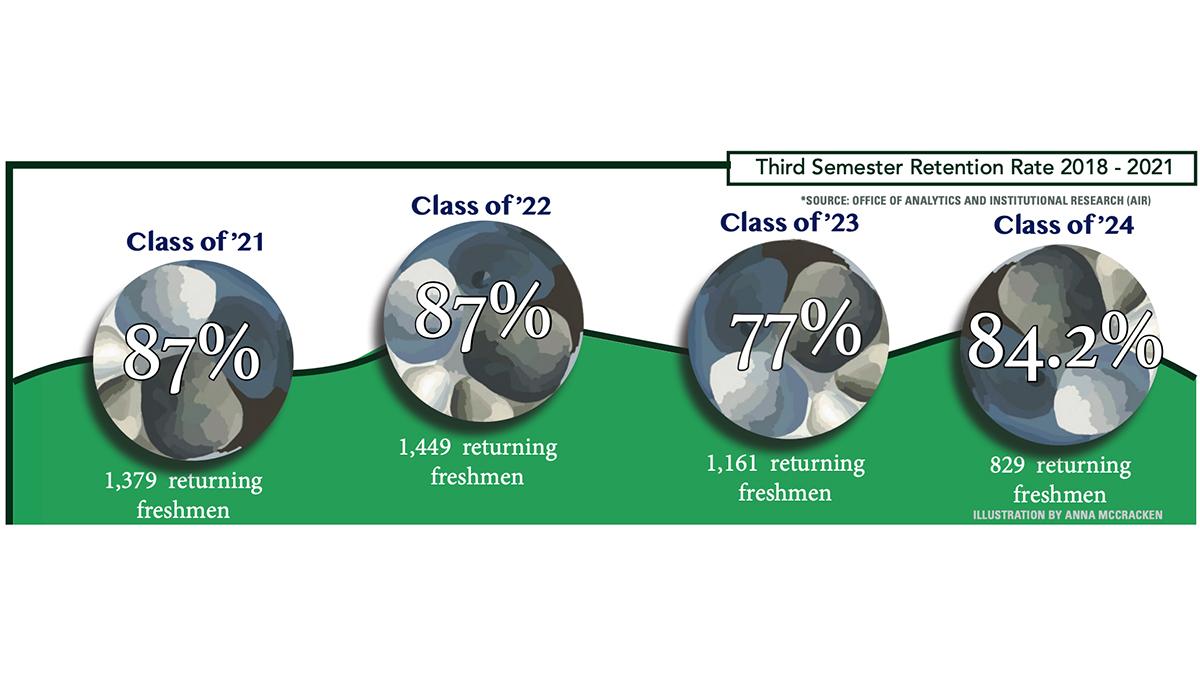 Anna McCracken/The Ithacan
According to the Office of Analytics and Institutional Research (AIR), there are a total of 5,239 students — 4,778 undergraduate, 421 graduate students and 40 extramural and exchange students — enrolled in Fall 2021. In Fall 2020, 5,354 students were enrolled at the college.
By Syd Pierre — Assistant News Editor
Published: October 21, 2021

While freshman enrollment at Ithaca College has increased from Fall 2020, campus community members still have concerns about student retention at the college following the effects of the COVID-19 pandemic.

Overall enrollment at the college has been decreasing over the past few years, mirroring national trends for colleges in the Northeast. According to the Office of Analytics and Institutional Research (AIR), there are a total of 5,239 students — 4,778 undergraduate, 421 graduate students and 40 extramural and exchange students — enrolled in Fall 2021. In Fall 2020, 5,354 students were enrolled at the college.

According to a report released by the National Student Clearinghouse (NSC) Research Center in early September, data shows a 2.5% decline in undergraduate attendance this fall. The report also said undergraduate enrollments at all types of institutions have declined, compared to the same time last fall.

“If you had to ask me for one metric that was the best indicator of your success as a college, it would be your graduation rate,” Koehler said. “And we are still in a place where we’re not where I think we can be, given the quality of this institution and the quality of our students.”

Koehler said there are multiple factors that influence students’ decisions to leave, including personal, financial and academic reasons.

Jay Tagliani, a junior at Boston University, said both he and his roommate decided to transfer to Boston University from Ithaca College in March 2021. Tagliani said there was an accumulation of factors that led to his decision to transfer, including housing decisions and dining at the college.

“It felt like at IC, we’re stuck in this trap of this sort of dwindling incoming class forcing the admission standards to sort of drop, which led to fewer people applying to IC [and] fewer people committing to IC, which meant they had to drop the standards even lower,” Tagliani said.

According to the National Center for Education Statistics, the average acceptance rate of first-time applicants to private, four-year institutions in Fall 2019 was 49.5%.

Kyra Feick, a fourth-year at Northeastern University, said she transferred after her sophomore year at Ithaca College. Feick, who played field hockey at the college, said there were many factors that went into her decision to transfer, including that she wanted to live in a city post-graduation and wanted to grow her professional career as a business student. She said the pandemic and the remote Fall 2020 was a large factor in her decision.

“I was thinking about [transferring] a little bit, but I thought it was pretty unrealistic and it was just going to be way too hard to do and actually pull off,” Feick said. “But COVID really put me in perspective that ‘Oh, well, you never really know what the future is like.’ So sometimes it’s OK to take risks and go off the path.”

Like enrollment and retention, the number amount of leaves of absence (LOA), withdrawals and undergraduate paid deferred students — students who have submitted both an intent to enroll and an enrollment deposit to the college, but deferred their enrollment — increased significantly in Fall 2020 due to the pandemic, and while the numbers have decreased, some of them have not returned to their post-pandemic state. Koehler said the withdrawals include students who transferred elsewhere, but also students who dropped out of college or withdrew instead of taking a LOA and ended up returning. She said the deferrals are students who were admitted and submitted an enrollment deposit, then deferred to the spring semester or deferred an entire academic year.

“We have to look at it from both the high level, so are there processes, or practices or barriers that we put in place that slow students down?” Koehler said. “And if we change that policy, for example, it would affect all of our students and might eliminate a cause of students leaving. And then the other level is that kind of a micro level — the individual student.”

Unlike Tagliani, Kyra Badger, a sophomore at Emerson College, said she had always planned to transfer out of Ithaca College. She said she only applied to the two colleges and after putting her deposit down for Ithaca College, she regretted her decision, but decided to go and see how it went. However, she said if the COVID-19 pandemic had not impacted her freshman year as much as it did, there might have been a possibility she would have stayed at the college.

She said that although she knew there was nothing the college could have done in regards to the COVID-19 pandemic, she thought some professors could have handled it better in the spring semester.

“Although I did transfer, I don’t think that it’s a bad school,” Badger said. “I don’t think it’s a bad place. I was definitely pretty miserable. But it wasn’t all like the school’s fault … I thought some of the professors really did not handle a lot of the issues that, especially freshmen, were going through.”

Elizabeth Bleicher, interim director of Student Success and Retention and chair of the Retention, Engagement Strategy Team (REST), said she was concerned about the sophomore population, which includes students who had a fully remote freshman year.

“I did have a couple of sophomores share with me that they were leaving because there was no campus life,” Bleicher said. “And I didn’t know how to say there’s no campus life anywhere in the country last year, because everybody was in lockdown. … Those who came back, definitely sophomores, are sharing with me, they’re having a better experience. But there’s still a sense of ‘I’m still trying to find my people’ that they weren’t expecting to have in their second year.”

Bleicher said the REST team is in the middle of receiving feedback from a survey sent out to sophomores and wants to check in with all students at regular intervals. She said the team is also working on improving the process for LOAs.

“The communications can sometimes be confusing and students don’t know where they are in the process,” Bleicher said. “So we’re working on that so that students can take a leave of absence and then we’re in communication with them while they’re gone. And we make plans for when they return, and then we support them in return.”

Bleicher said, as a faculty member, she is concerned for the impact the pandemic has had on all of the students at the college.

“I can’t pretend that there’s no pandemic out there,” Bleicher said. “So it’s this line I’m trying to walk by making this place a place where we get to concentrate on learning, but acknowledging that the demands that are being placed on my students and my colleagues are not what they were two years ago. So it’s like, it’s not back to normal. But this is the new normal.”

Freshmen struggle to adjust to college amid pandemic