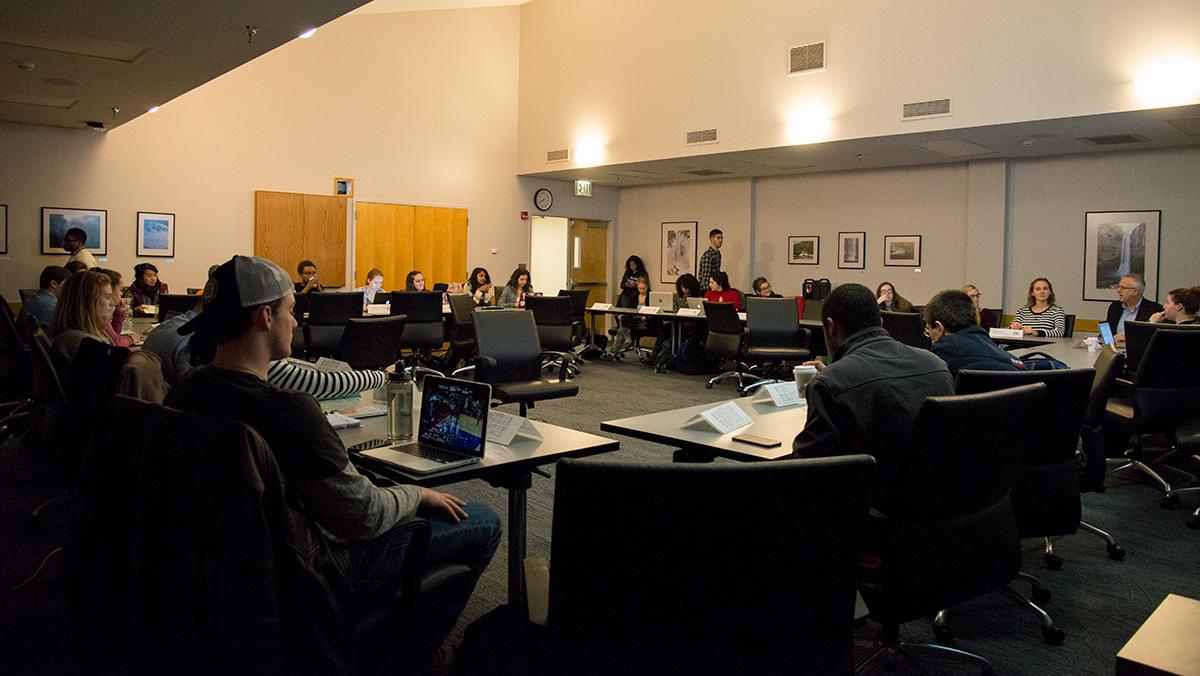 Andre Rojas/The Ithacan
Amid a slow semester in terms of bill proposals, the Ithaca College Student Governance Council passed its second bill at their meeting Nov. 28, which would bring local company Gimme! Coffee on campus as an alternative and eco-friendly coffee option.
By Sophia Adamucci — Staff Writer
Published: November 30, 2016

Amid a slow semester in terms of bill proposals, the Ithaca College Student Governance Council passed its second bill, which would bring local company Gimme! Coffee on campus as an alternative and eco-friendly coffee option.

Sophomore Laura Waxman, Class of 2019 senator, and sophomores Micol Wajskol and Calvin Yohannan, who are Eco-Reps for the Resource and Environmental Management Program, sponsored the bill, titled Alternative Coffee Bill. The SGC tabled another bill to be voted on for the following week.

“I want to have some sustainable coffee companies on campus, especially when coffee is definitely something consumed by most college students,” Waxman said.

Gimme! Coffee’s CEO, Kevin Cuddeback, was present at the meeting, along with the company’s COO chief operating officer and national sales representative, to answer any questions the SGC had regarding the bill.

The bill criticized Starbucks’ alleged lack of environmental consciousness and unsustainable production practices. The bill’s authors claim that Starbucks does not pay its farm workers fair wages or dispose of their cups in an environmentally conscious way and that the company uses genetically modified seeds from Monsanto — a rumor that has not been confirmed. Starbucks Corporate declined to comment, and redirected The Ithacan to its website for more information.

The bill also denounced the large carbon footprint created by getting coffee delivered from Starbucks — which is the brand of coffee sold at the cafes on campus — since the company does not have a distribution center in New York State. The closest distribution centers to Ithaca are located in Connecticut and Pennsylvania, according to the Starbucks website.

By contrast, buying coffee beans that are locally roasted and packaged in Ithaca would produce a smaller carbon footprint, the bill stated. Gimme! Coffee’s cold cups are recyclable, and the company is working to make its hot cups recyclable, too. The bill also stated Gimme! Coffee’s coffee would be less expensive to purchase on campus than Starbucks coffee.

Off campus, Starbucks, which charges $2.11 for a 12-ounce hot coffee, has a unit price of 17 cents per ounce and Gimme! Coffee charges 12 cents per ounce.

However, the goal of the bill is not to replace Starbucks. Instead, Gimme! Coffee would offer an alternative option for coffee. SGC president Marieme Foote said she is excited to see a local business being supported on campus.

“It definitely shows a shift in terms of people eating more locally, and also investing more in their communities,” Foote said. “So I’m really excited to see how the college reacts or adjusts to that kind of thing.”

The bill passed with nine votes in favor and five votes opposed, with one abstention. Senators who opposed the bill said the bill did not provide a cohesive timeline for when Gimme! Coffee would arrive on campus. Another point senators discussed was that the college’s relationship with Starbucks may be negatively affected by Gimme! Coffee’s presence on campus, due to added competition.

The SGC also tabled a bill called Proportional Representation, which is sponsored by Emily Honen, School of Humanities and Sciences Senator.

“I started to think about how diverse H&S was — we have humanities and sciences, and they are honestly very different things, so I just feel like it’s very important that the school is represented,” Honen said.

The bill proposed amending the SGC’s Constitution to add the possibility of electing an additional senator from the School of Humanities and Sciences, as the school has the highest enrollment. Currently, there is one senator from each school on SGC.

SGC’s constitution states that bills that propose changing the constitution must be voted on a week after the bill is proposed. SGC will vote on the bill at its Dec. 5 meeting.