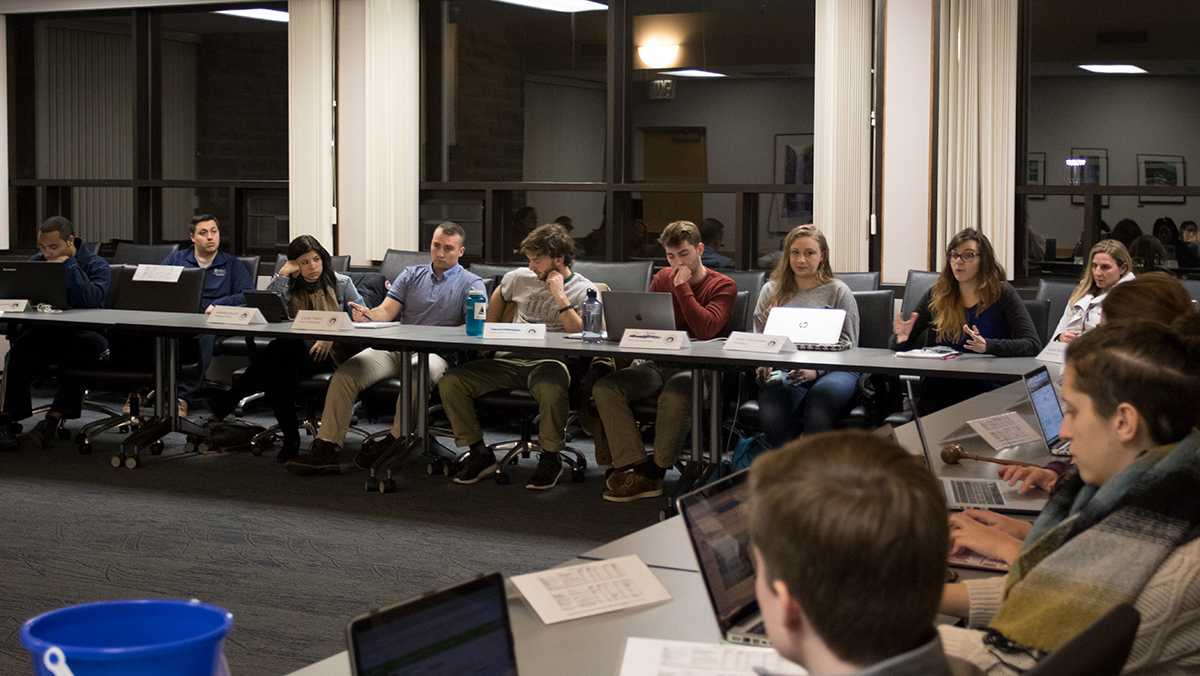 Avril Crowe
In addition to making recommendations, the bill also formed an SGC subcommittee to develop a plan for potentially subsidizing the cost of summer housing for international students.
By Ryan King — Staff Writer
Published: February 8, 2017

The International Student Support Bill was sponsored by Class of 2018 Senator Conor Friend and sophomore International Senator Isabella Grullon. The legislation listed several recommendations for the college administration to take to accommodate international students, including offering summer housing to students whose home countries are on the list of banned ones. If the ban is no longer in effect, the SGC recommends that the college provide international students with housing until they can make travel arrangements. The bill passed 14 to 0, with two abstaining.

The president’s executive order currently restricts travel from Iran, Iraq, Libya, Somalia, Sudan and Yemen for 90 days, meaning that the ban is set to end around the time of finals at the college.

Friend said the administration is currently in the process of considering further actions to take in addition to the ones it recently announced in response to the president’s recent executive order.

Last week, President Tom Rochon issued a statement in response to Trump’s executive order, saying the college is working to identify and reach out to students who could be affected by the executive order. The college also extended its travel registry resources to faculty, staff and students conducting any type of travel. Lastly, Rochon reminded students they are able to stay at the college over spring break free of charge.

Grullon, who initially came up with the idea, said the purpose of the recommendation is to push the administration toward taking further actions.

“We felt that if we presented something that shows that the Student Governance Council, which represents the student body is also on board, it would put a little more pressure to make this happen,” she said.

Grullon said the inspiration for the bill came out of a college town hall meeting about  Trump’s orders that she and Friend attended Feb. 2. She said international students at the meeting were advised not to leave the U.S. until more information was known about the president’s plans for foreign travel.

Grullon is a Colombian native. She said that with her U.S. passport, she believes she would not be impacted by the order but is concerned that her family might be affected in the future.

“That’s why it’s of special concern to me: because I would like my mom to be able to come to the United States and visit me,” she said.

In addition to making recommendations, the bill also formed an SGC subcommittee to develop a plan for potentially subsidizing the cost of summer housing for international students. The subsidy would apply to current students only and most likely would not cover the cost of off-campus housing. Junior Ezeka Allen, vice president of business affairs, who chairs the allocations committee, said the SGC will not fund the subsidized housing with the money it uses to fund organizations on campus.

“SGC cannot fund it,” she said. “Our organization, the money we have allocated towards us cannot fund it. But I don’t think SGC is against finding [outside] funds for it.”

This part of the bill initially drew some criticism during deliberations. The provision originally said an allocations subcommittee would be formed to develop the plan. Several senators expressed concerns that component of the bill was unconstitutional because senators are not allowed to create a subcommittee in allocations.

Also at the meeting, senior Julia Keahey was elected as the senator for the Class of 2017.

Grullon is also a columnist for The Ithacan.