Students and faculty have teamed with the Office of Residential Life and the Office of Facilities at Ithaca College to revitalize the rooftop of the Terrace Dining Hall with possible micro-gardens, artwork and other decorations.

Anne Stork, assistant professor of Environmental Studies and Science and manager of the Ithaca College Campus Gardens, said she will advise and support the student-run project. The project was named one of five exemplar projects — projects supported by the administration that “integrate curricular and co-curricular learning experiences” — said Benjamin Rifkin, provost and vice president for educational affairs.

“For the School of Humanities and Sciences, we are the demonstration project to be a pioneer in connecting Res Life with academics, and as someone who’s on the academic side, it’s pretty thrilling,” Stork said.

The area is known, colloquially, as pebble beach. It sits between Terrace One and Terrace Two and on top of the Terrace Dining Hall. Stork said the area right now is not being used to its full potential.

“It’s a drab space that’s not inviting, and it’s kind of a wasted space,” she said.

Ronald Trunzo, associate director of Residential Life and Judicial Affairs, said Residential Life has plans to bring back the Sustainably Conscious Living Community, which was canceled this year because of low enrollment. Residential Learning Communities such as honors housing, quiet study and transfer housing allow students with similar academic or social interests to live together in on-campus housing.

“All of the learning communities ask students to get involved and to attend so many events, and it is a perfect way for students to seek participation credit, or kind of a project to work on,” Trunzo said.

The roof already has a 15-by-15–foot plot that was given to senior Graham Mclnnis from the Office of Facilities for his semester-long environmental studies senior research project, Stork said. 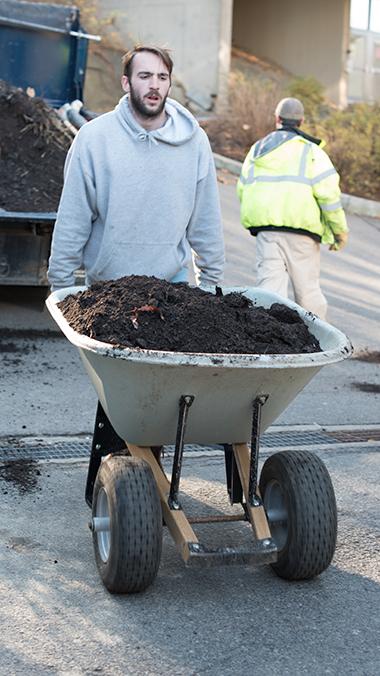 Senior Graham McInnis hauls soil from a facilities truck to the roof of the Terrace Dining Hall to fill in his garden plot. Amanda den Hartog/TheIthacan

McInnis, an environmental studies major, said he plans to install a permaculture garden, a simulation of a natural ecosystem condensed to fit any area. A permaculture garden already exists on campus in between Williams Hall and Phillips Hall, McInnis said.

He said the Office of Facilities helped him move the crabapple tree that previously occupied the space above the Terrace dining hall a couple of weeks ago, and he plans to start planting in the spring semester. He began the first step, sheet mulching, Nov. 19.

“You add in a bunch of materials that compost over time, you plant directly into the compost, and the soil stays healthy with the plants, and you don’t have to turn it or till it,” Mclnnis said.

Mclnnis and Stork said there were also plans to start sheet mulching and possibly planting in the Towers planters, located outside the entrances and on the balconies of the Towers residence halls.

Stork said Mclnnis’ project was the first step that inspired the planned revitalization of pebble beach. Stork said the dean of HSHP asked her to teach a class, but she opted for a research team instead. She is advising the Rooftop Garden Research Team, which will be responsible for facilitating the project and helping Terrace residents get involved.

“To me, a research team says it’s not me telling people what to do. Instead, we’re pooling our energies, learning from each other, and we’re creating something brand new. … These students will actually be leading the residents of Terraces to say, ‘This is what we’re going to do,’” Stork said.

She said the research team is currently made up of 10 students who will earn from one to three credits in the spring semester for their involvement, depending on their time commitment.

She said members of the research team and herself held a focus group in the Terrace residence halls in early November to see what the students wanted.

“It was just five students out of the whole Terraces, so it was a small group, but it was exciting ideas and, I think, probably represents ideas of many students,” Stork said.

The ideas from the focus group were brought to a residential life meeting Nov. 19.

Stork said the Nov. 19 meeting was about “finding out, of the possibilities, what the restrictions are, … and before we get excited and run with something, let’s check out and make sure what’s doable,” Stork said.

Stork said she thinks the project represents something much bigger for college students to take with them.

“I could go up there with my little trowel, plant a bunch of little plants and make it look really pretty. So what? That’s not the purpose,“ Stork said. “What’s really important to me is the empowerment — that you have a vision, you have a desire, and you get to act on it and make it become reality. I think that’s a really powerful experience for a college student because if you get a taste of that and you leave here, imagine what you could do.”