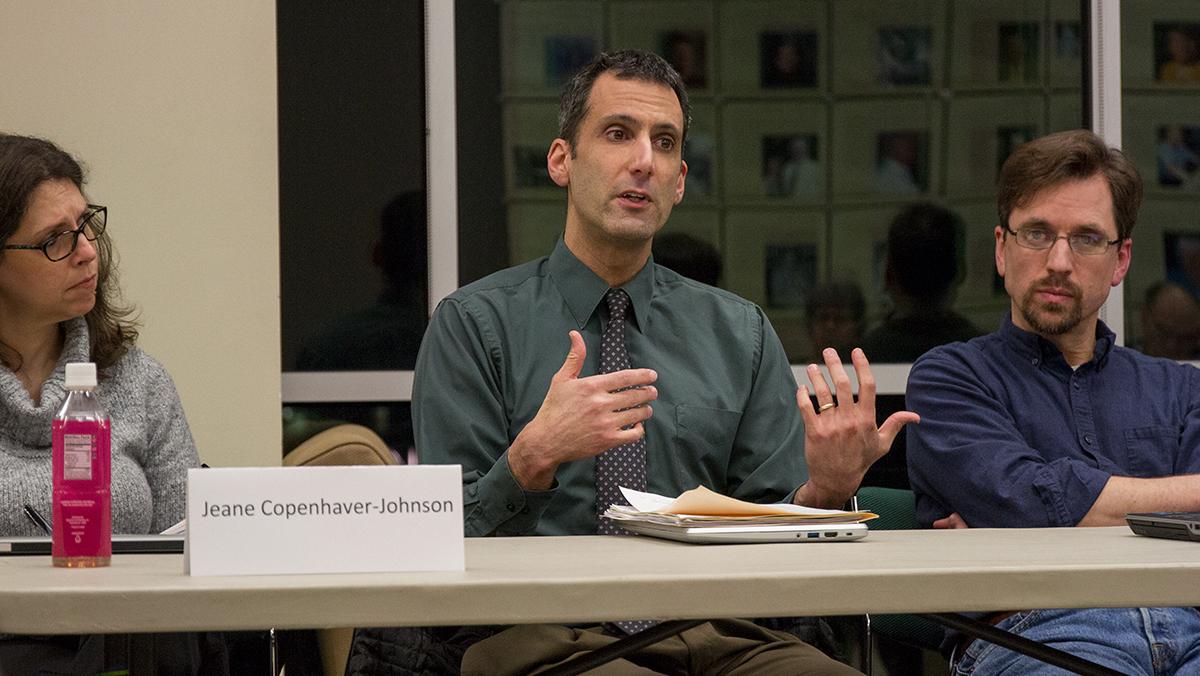 The head of the Integrative Core Curriculum brought the issue of students’ struggling to complete their ICC requirements to the Faculty Council on Feb. 7.

Also at the meeting, Registrar Vikki Levine introduced a new degree evaluation program for students; representatives from the Student Governance Council spoke about their two new bills regarding international students at the college; the council discussed its draft of a shared value statement; and Bryan Roberts, associate dean of the Roy H. Park School of Communications, discussed the outcome of the newly implemented final–grades procedure.

Vince DeTuri, associate professor and director of the ICC, discussed with the council his efforts to collect data on students graduating this spring who are experiencing problems because of the ICC requirements. Of the 1,353 students who petitioned for graduation this spring, originally 21 percent of them had problems with the ICC that would prevent them from graduating, DeTuri said. However, after working with students who had these issues, DeTuri said, he was able to bring this number down to 1 percent.

“I think these are good numbers,” Deturi said. “I think it’s a celebration.”

Levine addressed the council about introducing a new digital program at the college that will serve as an upgrade to the current degree evaluation program within HomerConnect. The program, DegreeWorks, is used by 65 percent of higher education institutions, Levine said. The three programs that DegreeWorks contains are a degree evaluation tool, a student education planner that allows students to plan out eight semesters, and a tool to improve the display of prerequisites when students look up classes. The program will be introduced periodically by grade level, beginning in September with the Class of 2021. The goal of DegreeWorks is to be more user–friendly than the current degree evaluation program and to give students easier access to important information.

“It’s not just about coursework — it’s about the student experience,” Levine said.

A kickoff event for the introduction of DegreeWorks will take place on campus April 11.

Levine also said she is looking to improve the registration process for students. Levine proposed making registration a two-week process that would happen on a Tuesday–Thursday schedule with only two timeslots each day: one before classes begin and one during the lunch hour, to prevent scheduling conflicts. This improvement is being made to make the process easier on students and for the Office of the Registrar to fix problems that arise during registration, Levine said.

“We think the anxiety is driven by registration just being a moment,” Levine said. “We want to try to lessen the anxiety.”

SGC Executive Board members Anna Gardner and Carlie McClinsey spoke to the council, asking to collaborate on the bills the SGC recently passed. These bills — the Sanctuary Bill and the International Student Support Bill — are designed to protect international students at the college who could be at risk because of the executive order issued by President Donald Trump restricting travel from seven Muslim-majority countries. The council is scheduled to meet with the SGC on Feb. 20 to discuss what they can do moving forward.

The faculty also revised the shared value statement, which was drafted in response to the election of Donald Trump. The document states the faculty’s values toward discrimination, similar to the document released by the Massachusetts Institute of Technology. The document is still in the draft stage and will be revisited next meeting.

Finally, Roberts addressed the council on the success of the rolling final grades that were put into place during the fall semester. Rolling grades allows students to receive them Dec. 15, when faculty begin to submit them, instead of not seeing them until Dec. 30, when grades are due. The comments about the program at the meeting were all positive — for example, faculty will now still be on campus when students receive their grades, should disputes arise.

Vincent DeTuri, associate professor in the chemistry department, will be the new director of the Integrative Core Curriculum beginning June 1.

Chemistry professor to be new director of the ICC