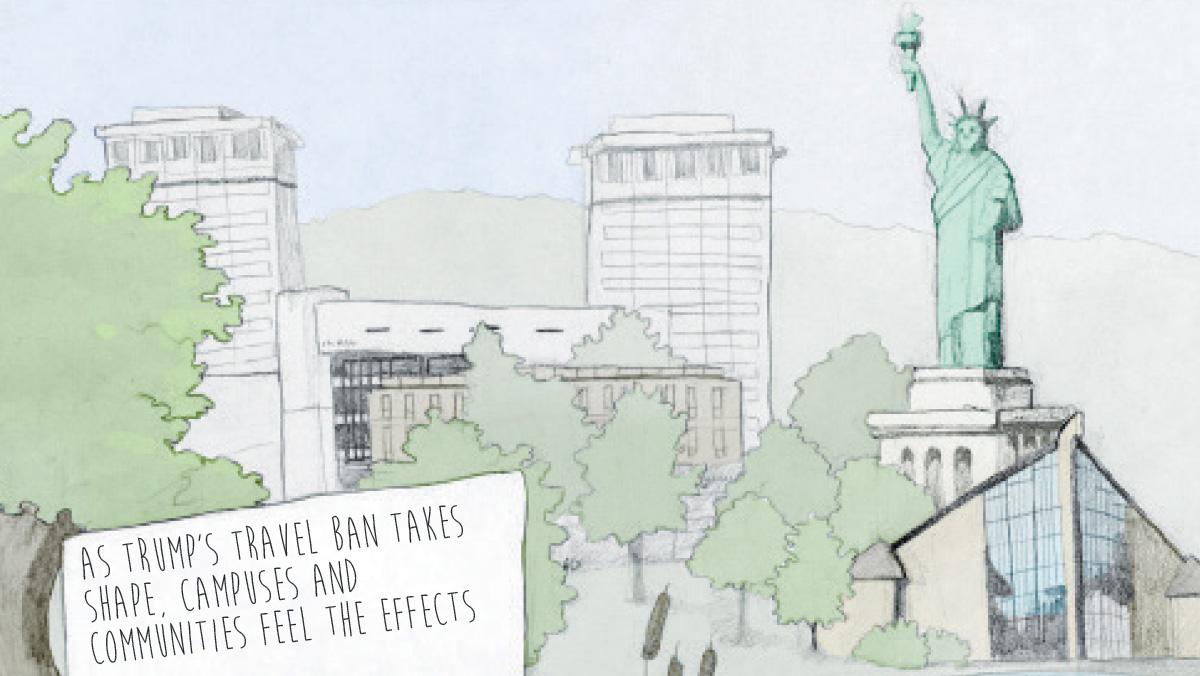 At the end of Fall 2016, the Ithaca College Student Governance Council passed a bill proposing that the college’s administration declare the institution a sanctuary campus. The college’s administration is just one of many contemplating this request, as students on campuses across the United States are demanding their schools become sanctuary campuses following Donald Trump’s election and inauguration as the 45th president.

On Jan. 25, Trump signed an executive order titled “Enhancing Public Safety in the Interior of the United States,” stating that sanctuary jurisdictions cannot receive federal grants — unless funding is required for law enforcement purposes. The order states that “[Sanctuary] jurisdictions have caused immeasurable harm to the American people and to the very fabric of our Republic.”

Without a legal definition of what constitutes “sanctuary,” the college maintains its existing policies protect the privacy of all its students regardless of immigration status.

The SGC’s bill proposed that the college uphold the Deferred Action for Childhood Arrivals policy — which grants undocumented immigrants the eligibility for deferred action for up to two years and work authorization if they arrived in the United States when they were under the age of 16 and meet several other guidelines — under Trump’s administration, which has threatened to repeal it. The bill also proposed that officers of the Office of Public Safety and Emergency Management do not question or detain individuals based on immigration status.

Junior Michele Hau, vice president of academic affairs for the SGC and sponsor of the SGC Sanctuary Bill, said her main goal for the bill was to raise awareness of the fact that political actions that happen on the federal level do not occur in a vacuum and that the college can be affected. Another goal was to spur the administration to actively take steps to protect students who are becoming increasingly disenfranchised, Hau said.

“Saying that we’re a sanctuary campus is saying we’re making a commitment to education — it’s making a commitment basically the future of the college and what we believe in,” Hau said. “It falls in line with a lot of our principles, and I would be kind of disappointed if we weren’t to step up.”

“As a practical matter, these sanctuary ordinances cannot stop immigration officials from doing their jobs, but it can indicate that the city or campus is not going to help immigration enforcement officers by telling them about people who may be here without proper authorization,” Yale-Loehr said.

Regarding federal funding, he said the government cannot take funding away from an unrelated area if the college did not comply with federal rules. Yale-Loehr gave the example that if the federal government were funding a professor’s research at the college, the government could not take that funding money away if the school declared itself to be a sanctuary.

The Ithacan previously reported that President Tom Rochon discussed whether or not the college would declare itself a sanctuary campus at the All-College Meeting on Jan. 19. Rochon said he would be wary of that declaration because while people may personally support the symbolic declaration, it might not be pragmatic for the college to become involved in political statements.

Nancy Pringle, senior vice president for the Division of Human and Legal Resources and general counsel, said since there is no legal definition for sanctuary campus, there is nothing in the law that would guide the school in becoming a sanctuary campus. However, every student who attends the college is protected under the Family Educational Rights and Privacy Act — which is the federal law that gives students’ educational records protection of privacy — regardless of documentation status. Therefore, every student under FERPA is protected in the same way, Pringle said.

“To me, it is about what are the concepts as a community we want to be about, as it relates to our students, and those, to me, are the values that the college would articulate,” Pringle said. “Whether we would attach that we’re a sanctuary campus, because quite frankly, it doesn’t have any legal effect to say that. If a DACA student said, ‘I’m going to go to Ithaca because they’re a sanctuary campus,’ it wouldn’t necessarily protect them from federal laws that might be implemented.”

“As an institution, as the faculty, we want to affirm human values and human rights,” Swensen said.

“I would like to see students, faculty and the current administration believe in people over money and just continue to support everyone here on campus and not support the Trump administration,” Friend said.

The administration released a statement on Intercom on Jan. 25 to affirm the college’s commitment to protecting undocumented students. According to the statement, the college admits students and provides financial aid regardless of immigration status. The college also stated that Public Safety does not enforce immigration law.

“Ithaca College is committed to ensuring that everyone in our community feels safe and welcomed, regardless of immigration status, race, ethnicity, religion, gender, or sexual identity,” the Intercom announcement stated. “We stand up for these values, striving to the best of our ability to be inclusive and supportive of every student, as well as every member of our faculty and staff.”

“A name is just a name,” Foote said. “It’s a buzzword, but the actual concrete policies in terms of protecting undocumented students is what is really important to us at the end of the day.”

What’s happening at other colleges

Foote recently signed an open letter addressed directly to Trump asking him to uphold DACA and visas for international students. The open letter was written by Cory Bisbee, an undergraduate student president at Clark University, and by Jan. 30, student presidents from 64 institutions had signed the letter. Bisbee said that with the letter, he is trying to carve out space in the public discourse about Trump’s immigration policies for students.

He said the issues presented in the letter are not isolated to one university and that students are directly impacted by the Trump administration’s actions; therefore, it is on student government leaders to speak up. Some student presidents were ambivalent about the letter and were uncertain about taking a political stance as the leaders of their student bodies, Bisbee said.

“I think the best way for a student president to serve all students is to quite literally serve all student interests even if there is a minority, vocal minority or even a majority that is opposed to that,” Bisbee said.

The SGC’s sanctuary bill cited a Google Doc that lists 197 institutions of higher education where students are petitioning for sanctuary status.

Willy Palomo, a second–year master’s student at Indiana University Bloomington, is the executive officer for the school’s UndocuHoosier Alliance — a student alliance that has been advocating to make Indiana University Bloomington a sanctuary campus since Trump’s election. Palomo said undocumented immigrants deserve the right to pursue higher education and that the group works from the premise that no human is illegal.

“It’s symbolic, but it does have practical value to it because undocumented people who have to live with the fear and feeling unwelcome … that is a huge emotional and mental burden lifted off of their shoulders by declaring sanctuary campus,” Palomo said.

Yale-Loehr said it is unclear if Trump’s executive order regarding sanctuary jurisdictions applies to sanctuary campuses, but he suspects the Trump administration will include sanctuary campuses in the order. Complete defunding of public institutions in not possible because only funding for areas related to immigration and international students could be affected, nor could student federal aid be taken away from individual students, Yale-Loehr said. Private institutions that declare sanctuary have relatively little to lose unless the Trump administration chooses to sue, which would create litigation costs.

“I think when push comes to shove, there is relatively little money that the Trump administration could take away from private universities,” he said.

This story has been updated to reflect the correct definition of the Deferred Action for Childhood Arrivals Policy. The article previously stated that it grants certain undocumented immigrants the right to attend college.