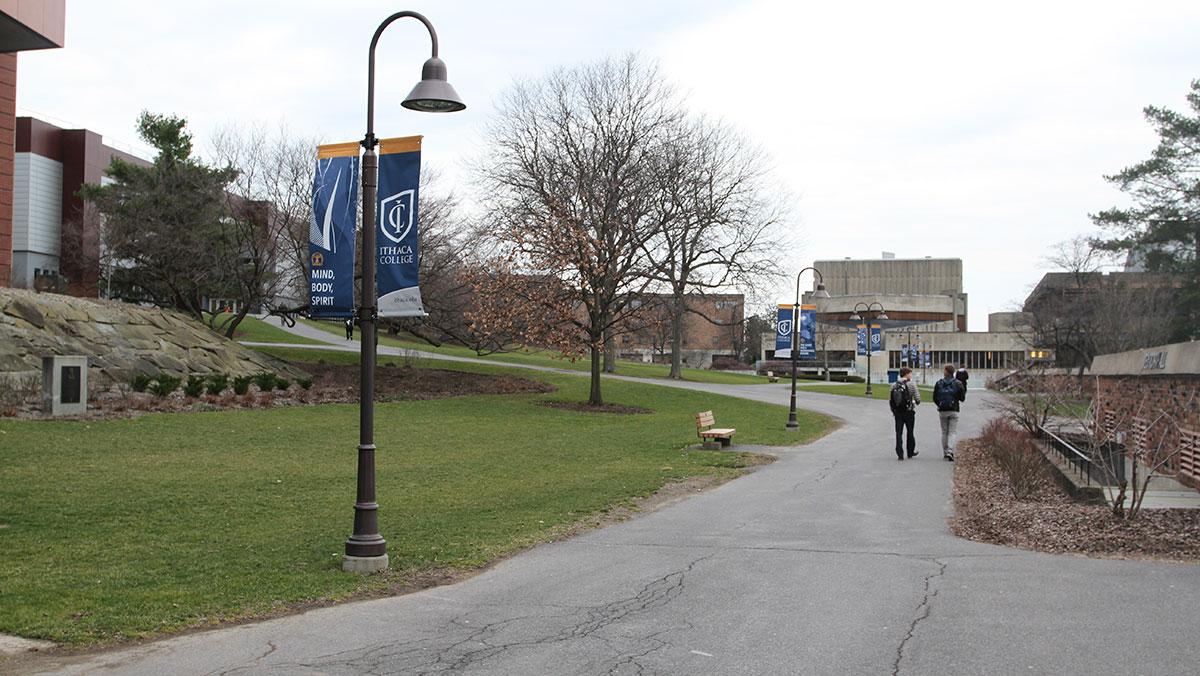 Ithaca College’s Provost’s Task Force on Integrative Core Curriculum (ICC) Revision has finalized its proposed changes to the ICC. Students and faculty said they see a benefit to including student voices in the decision-making process moving forward.

The proposal includes six recommended revisions to the current ICC: eliminating the current e-portfolio and complementary liberal arts (CLA) requirements; adding a new two-course integrative engagement (IE) requirement; allowing departments and degree programs the option to specify one of the perspectives — creative arts, humanities, social sciences or natural sciences — as being covered within a major; separating themes from perspectives, a separation that allows students to take courses outside their designated themes and have them count for the themes and perspectives requirements; and adjusting requirements for courses to be designated as an ICC capstone course. The proposal also recommends adding a “Pathways” experience, which comprises the Ithaca Seminar, two IE courses and the ICC capstone course.

The task force had planned to finalize its amendment proposals and submit them to the Committee on College-Wide Requirements (CCR) in Spring 2020 but was delayed because of the COVID-19 pandemic. The CCR is in charge of compiling feedback across the college for curriculum designs and defines the elements of the ICC.

The task force submitted its proposal to the CCR on Nov. 9, said Brooks Miner, CCR co-chair and assistant professor in the Department of Biology.

Miner said the CCR sent out the proposals to curriculum committees at all five schools and the Student Governance Council (SGC). He said the groups would provide optional feedback on the proposal by Dec. 4, and, depending on the feedback received, the CCR may ask the task force to revise the proposal or proceed forward.

As of Dec. 3, Miner said he had not received much feedback from the groups.

“If students or faculty had strong negative reactions to the proposal, I might guess we would have heard from them by now,” Miner said. “In my informal conversations with other faculty, I have found that people are enthusiastic about the proposed changes.”

If the proposed changes are implemented within the intended time frame, the changes would have little effect on current seniors and juniors. Miner said members of the Class of 2021 will still have to submit e-portfolios and complete the CLA requirement.

The ICC has been a source of frustration for students because of the graduation requirements and scheduling issues.

Junior Jessica Ketterer said she likes that she can customize her courses through the ICC to make them more interesting but that she finds the e-portfolio confusing, so she is satisfied with the proposed changes.

“I find it very tedious and there’s very little guidance on how to complete it and the criteria,” Ketterer said.

Susan Adams Delaney, associate professor in the Department of Writing, director of the ICC and member of the ICC task force, said that while faculty members make the final decisions on curriculum, she is a big proponent of encouraging students’ voices to be heard as well.

“It’s important to me that we ensure that students have a chance to weigh in on this now and really have their voices heard,” Delaney said. “As an ex officio person, I am going to nudge that and for opportunities for that to occur. And that may mean me contacting [and] going directly to the schools’ curriculum committees and the associate deans just to say, ‘Let’s be sure it gets shared with students. Let’s get to be sure that students have a chance to talk about this.’”

Currently, there is one student on the ICC task force: sophomore Soumyaa Joshi, vice president of academic affairs for the SGC at the college. Junior Reed Pollard was the student representative during the 2019–20 academic year.

Joshi said that while it is only her first semester on the task force committee, she has been able to make suggestions based on her perspective as a current student. She said student input is crucial to the process.

“Administration and faculty have the best interest for students,” Joshi said. “But they aren’t actually students, right? So they don’t know how this will impact students. … Ultimately, students are the ones being impacted by these decisions, so they should have a say and an input.”

Outside the student positions on the task force, students have also come forward to voice their opinions about the ICC with the hopes of creating a separate student committee. Senior Jackson Short said that he collaborated with Delaney over the summer to figure out what student involvement would look like for the changes to the ICC.

Short said that he was excited about the proposed changes to the ICC, including the elimination of the e-portfolio and separation of themes and perspectives, but that he did not think the changes would fully solve the larger problems within the ICC.

He said that the proposal did not address contingent faculty members’ involvement in ICC courses. He said there should be greater investment from tenured and tenure-track faculty in ICC course loads.

“The [Academic Program Prioritization process] has not clearly addressed how department and faculty cuts will affect ICC course offerings,” Short said. “There is something unsettling about a determination to add additional course expectations to the collegewide curricula in the same month that the college is also convening to determine program cuts.”

In October, the administration announced its plan to cut 130 full-time equivalent faculty positions at the college. Members of the campus community have expressed concerns that the impending cuts will disproportionately affect contingent faculty, many of whom teach ICC courses. Miner said that while the reduction in faculty positions could reduce the number of ICC courses offered, the largest predictor of ICC courses offered will be the total enrollment at the college.

Delaney said the student advisory group is now forming as an ad hoc committee — a committee formed to address a specific issue and dissolved afterward. She said the group has two goals to complete by the end of the spring semester: finalizing a proposal to formalize student participation in the ICC process and reviewing the diversity requirement of the ICC.

Senior Abigail Murtha, senate chair for the SGC, said she would recommend that the steering committee members be open to hearing input from a variety of students at the college, including placing quotas on groups to make sure students from a range of majors and organizations are included.

“You also need to cater to the different types of students’ learning styles, so opening it up to the students who maybe don’t have enough time to be on the committee or who might not normally get involved,” Murtha said. “And I think that’s sometimes a difficult thing to do. But when this change impacts everyone, I also think it’s a really integral thing to do.”