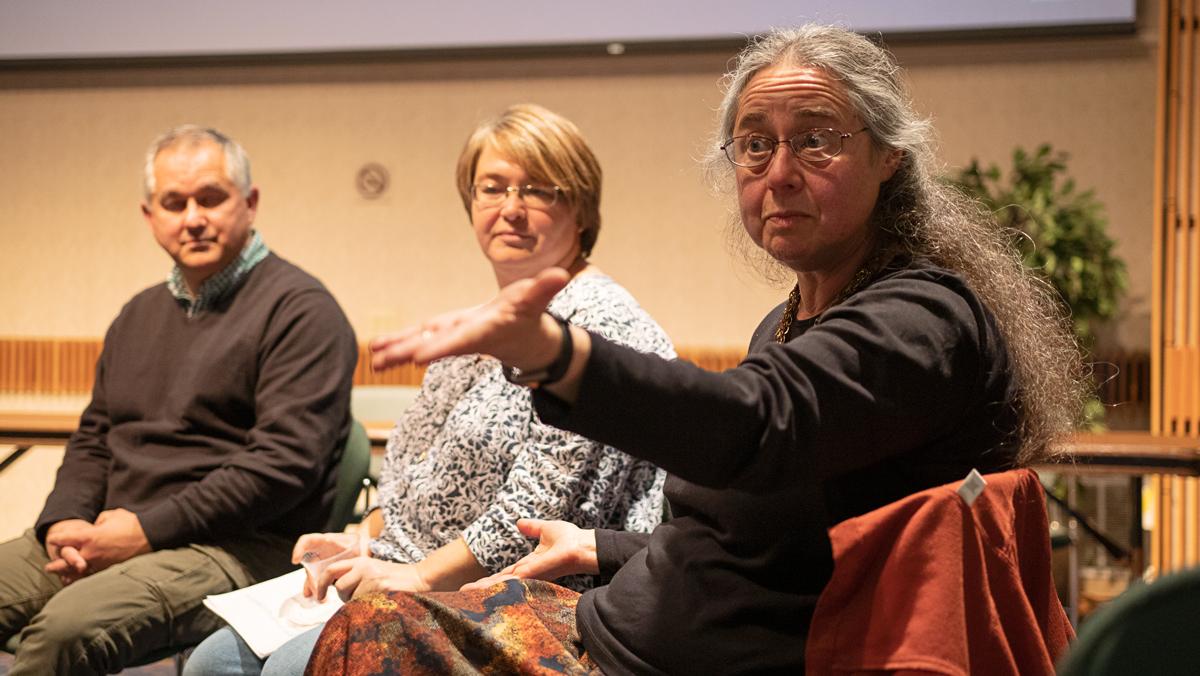 Chloe Gibson/The Ithacan
From left, Dave Brown, professor and chair in the Department of Mathematics, Tatiana Patrone, associate professor in the Department of Philosophy and Religion and Stacia Zabusky, associate dean of the School of Humanities and Sciences talk at a meeting with the ICC task force Nov. 12, 2019.
By Syd Pierre — Staff Writer
Published: April 22, 2021

Ithaca College’s Provost’s Task Force on Integrative Core Curriculum (ICC) Revision has revised and finalized its proposal on the ICC. The Committee for College-Wide Requirements (CCR) will be holding a faculty vote on the proposal.

The revised proposal recommends six revisions to the current ICC curriculum: eliminating the current e-portfolio and complementary liberal arts (CLA) requirements; adding a new one-course integrative engagement (IE) requirement; allowing departments and degree programs the option to specify one of the perspectives — creative arts, humanities, social sciences or natural sciences — as being covered within a major; separating themes from perspectives, a separation that allows students to take courses outside their designated themes and have them count for the themes and perspectives requirements; and adjusting requirements for courses to be designated as an ICC capstone course. The proposal also recommends adding a “Pathways” experience, which comprises the Ithaca Seminar, one IE course and the ICC capstone course.

The original proposal called for two IE courses for the “Pathways” experience, which was decreased to one following feedback the task force received, said Brooks Miner, CCR co-chair and assistant professor in the Department of Biology.

If passed, the recommendations would go into effect in Fall 2022, starting with the Class of 2026. The ICC currently includes six themes for students to choose from, an introductory seminar for freshmen, an e-portfolio required for graduation and complementary liberal arts requirements that are defined by major programs at each school.

The task force first submitted its draft proposal to the CCR on Nov. 9 and received feedback throughout November and early December. Groups that provided feedback include curriculum committees at all five schools, the Student Governance Council, Academic Advising Center, Ithaca Seminar Steering Committee, Deans’ offices and the Faculty Council. The task force made revisions based on the feedback and submitted the final proposal to the CCR on April 6.

“We sort of grouped those questions into a couple different areas, and then in our feedback to the task force, we said, ‘These are things that we’ve got a lot of questions about, and it’s a little bit unclear to us from reading the proposal,’” Miner said. “And so they clarified a lot of explanations in the proposal.”

The CCR will conduct a faculty advisory vote on the proposed revisions. According to an Intercom post, the faculty vote will be conducted from April 22 to 30 on Qualtrics.

“Each faculty member will indicate whether or not they support the proposal overall, in addition to separately indicating their support for each of the six individual changes to the ICC contained in the proposal,” the post stated.

Miner said he is looking forward to finishing the process, which he has only been involved in the later stages because of his role on the CCR. The APP revision process started in 2017 with senior surveys, student and faculty surveys in 2018 and an external review in 2019.

“A lot of people other than me have put a lot of effort into this, and a lot of people have given careful, detailed feedback,” Miner said. “And people have done revisions in response to that. And so I’m really looking forward to it all going somewhere and coming to fruition. I think it’s something that a lot of us would have rather had been completed sooner, were it not for the way everything got delayed as a consequence of the pandemic.”