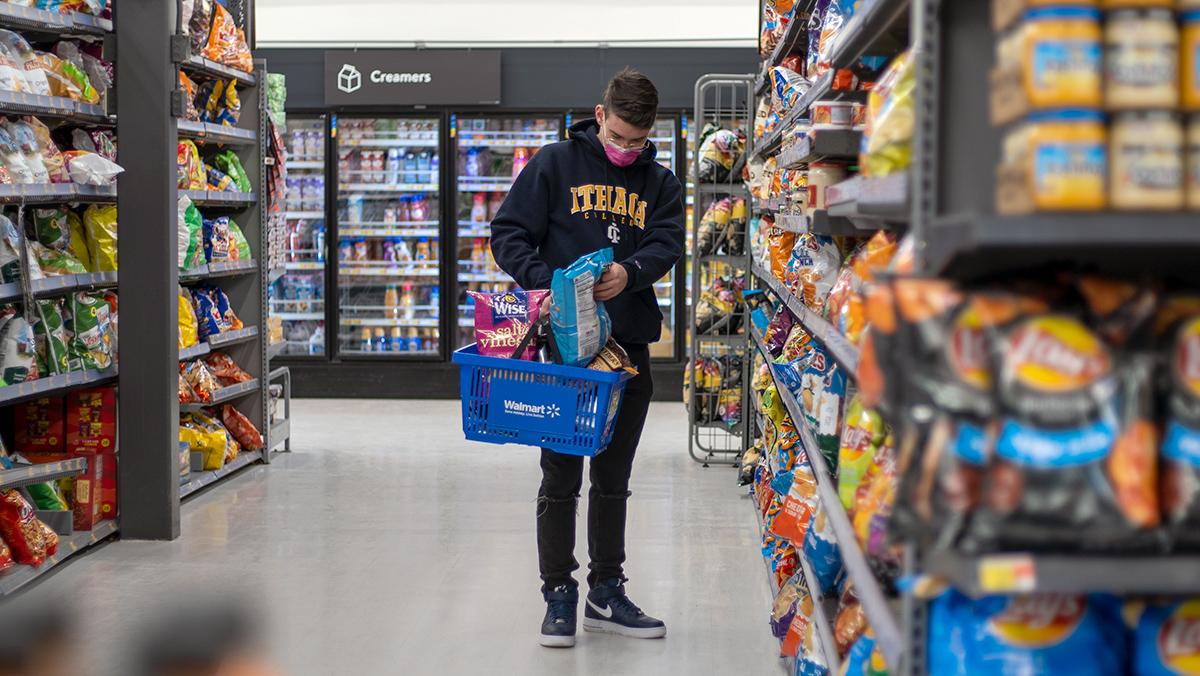 As inflation raises the cost of kitchen-table items like gas, food and rent, Ithaca College students have begun to feel its effects in their wallets.

Since early 2021, the United States economy has experienced a surge in inflation, creating an increase in the costs of goods and services and decreasing purchasing power. The United States’ inflation rate grew from 1.4% in January 2021 to 7% by December 2021, according to Statista. Additionally, inflation affects people under 30 — particularly students — disproportionately. The causes of this ongoing surge are the global supply-chain crisis and corporate price gouging.

Junior Nick Mattera said the rising cost of food has been a growing problem for him. Mattera, who is from Queens, said one of the things he liked about going to school upstate is the lower food prices than food in New York City. However, Mattera said the rising cost of life in Ithaca has made his financial experience more on par with where he grew up.

“I was really struggling just in general with getting food last semester,” Mattera said. “I couldn’t really justify spending like $40 to get one entree delivered to my house through GrubHub. It was killing my wallet.”

Delivery apps like GrubHub and DoorDash have been found to be raising their fees throughout the pandemic, despite increased delivery demand making them record profits.

Steven Novakovic, instructor in the Department of Finance and International Business, said that while inflation does make items more expensive for the average consumer, some inflation is the sign of a healthy economy. Novakovic said in mid-2021, most economists explained the ongoing increase in inflation as the economy’s natural response to the COVID-19 pandemic. However, as rates of inflation continue to rise, it has become clear that the causes of inflation are deeper than the pandemic.

“Going back a couple months ago, most perspectives were that it was temporary,” Novakovic said. “Now more and more people are starting to say ‘Well we might need to just suggest that this is the new normal.’ This means there needs to be some actions taken.”

Kevin Adelman ’14 is the co-owner of Bickering Twins, a Latin American restaurant and tequila bar on The Commons that is popular among students at Ithaca College and Cornell University. Adelman said the ongoing inflation surge has increased the costs of items the restaurant needs, like takeout containers, chicken and disposable gloves for cooking. Chicken prices have increased due to shortages and lack of supply-chain labor.

“Chicken thighs almost doubled,” Adelman said. “They were historically cheap, like $1.25 a pound, we used to get a really good price on them. Now they’re literally double, like $2.50 a pound.”

Novakovic said for Ithaca College students, the effects of inflation will be felt particularly on the increase in tuition cost. In October, the Ithaca College Board of Trustees approved a tuition increase of 3.25% — an increase of $1,515, bringing the cost of attendance to $64,060. This is higher than any of the college’s previous tuition increases after 2014. Novakovic said for students who have already taken out loans at a fixed rate — interest on the loan stays at the same rate until the loan is repaid — inflation can be seen as a positive.

“What’s really interesting is that if there is inflation and you have this fixed debt, inflation ends up being kind of a good thing for you,” Novakovic said. “If your wages rise because inflation has gone up and forced you to earn more money, the costs [of loan repayments] stay the same but the amount of money that you receive has increased.”

In addition to loans and food, the cost of gas has been increasing significantly. In May 2021, gas prices passed $3 per gallon on average and by December hit $3.28 per gallon.

Junior Abby Schroeder said that since she was a freshman, she has had her car on campus with her. Schroeder said inflation has increased the cost of gas for her significantly, as she lives in Buffalo, New York and drives home frequently.

“I’ve definitely noticed the price going up,” Schroeder said. “It used to be pretty cheap. I never used to ask my friends ‘Hey, can you send me gas money?’ because I didn’t care … I would say it’s increased 10 or 15 bucks for me to fill my whole tank.”

Mattera said the cost of everyday items increased so significantly that he has asked himself if he needs to pick up a new job.

“I lifeguard in the summer so that I can coast on that money throughout the rest of the school year,” Mattera said. “I’ve definitely noticed that it’s not as easy as it was freshman year when I could just spend whatever and then go back to work in the summer. It eats up a lot of my savings.”

COVID-19Department of Finance and International BusinessDoorDashGrubHubinflationIthaca College Board of Trustees