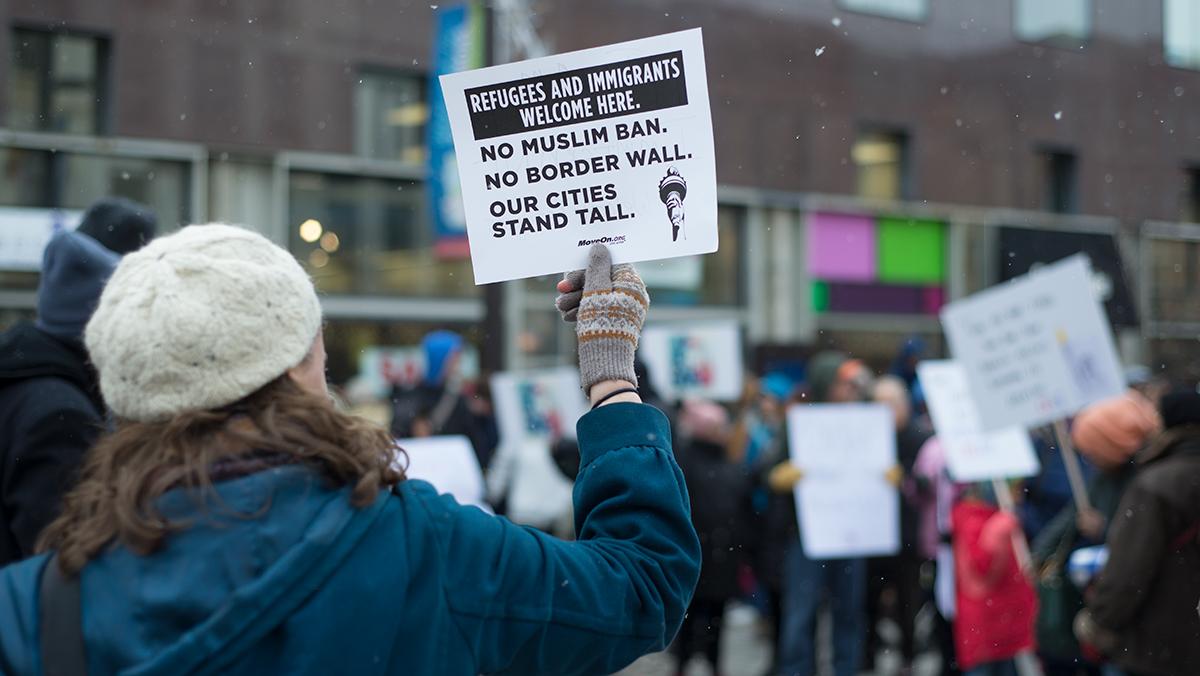 FERNANDO FERRAZ/The Ithacan
Local government has been taking steps to protect the local refugee populations. On Feb. 1, the Common Council passed an ordinance ahead of schedule to make the City of Ithaca a sanctuary city.
By Ben Kaplan — Staff Writer
Published: February 8, 2017

The ban prevents immigration from Iraq, Iran, Libya, Somalia, Sudan and Yemen for 120 days and bars Syrian refugees from the United States indefinitely. In the fall, the U.S. Department of State gave Catholic Charities of Tompkins and Tioga County permission to bring 50 refugees — about 10 to 12 families — to Ithaca. However, the executive order blocked three families: two from Syria and one from Afghanistan.

Though Afghanistan is not one of the seven banned countries, the executive order also bans all refugees being admitted into the United States under the Refugee Admissions Program for 120 days.

On Feb. 4, the U.S. Department of Homeland Security announced its decision to block the executive order, which Trump initially signed Jan. 27. Many with valid visas, which were previously made invalid by the ban, hurriedly traveled into the United States while the order was blocked. However, Sue Chaffee, director of Catholic Charities’ Immigrant Services Program, said the Ithaca-bound refugee families could not do this because they are still in the process of attaining those visas.

In a statement released by the organization, Renee Spear, Catholic Charities’ executive director, said those three families had already been vetted and were only a few steps away from settling in Tompkins County.

“We are heartbroken for these parents and their children who had come so close to escaping the misery and precariousness of their life situation,” she stated.

Chaffee said she thinks the order is a hindrance for refugees who are trying to complete what she said is an already extensive federal vetting process. On average, resettlement applications take 24 months to complete, she said, and applicants must go through medical and background screenings as well as in-person interviews.

“It’s hard to predict how quickly families get back into the pipeline and continue through the process,” Chaffee said. “The overall interruption in processing may force refugees who were in the pipeline and U.S.–bound to go through additional fingerprinting, interviews, health screenings and multiple security screenings yet again, all while their lives are in danger.”

Ithaca Mayor Svante Myrick said he has sympathy for all three families and other refugees who have been seeking to escape political and social strife.

“We want badly for them to come here,” Myrick said. “We have people living in poverty here in America, but we don’t have anyone living in imminent fear that bombs will drop on their heads and tear them and their families apart.”

Local government has been taking steps to protect the local refugee populations. On Feb. 1, the Common Council passed an ordinance ahead of schedule to make the City of Ithaca a sanctuary city. The title classifies Ithaca as a safe haven for refugees and documented and undocumented immigrants, where they will be guaranteed unbiased access to public services, Myrick said. Myrick, who said he has worked closely with organizations like Catholic Charities and Ithaca Welcomes Refugees — another organization dedicated to resettling refugees — was a proponent of the ordinance and said Trump’s executive order shaped his resolve.

“I think there are a few things the city government can do, and I think we’ve done those things,” Myrick said. “The rest is up to those who live here, and that is to reach out to the Catholic Charities, reach out to IWR and reach out to your neighbors.”

Support from the community has also grown in the past few weeks since the executive order was issued, Chaffee said. She said Catholic Charities has received a flood of inquiries from both immigrants and nonimmigrants voicing their concerns and inquiring about how they can help.

“For the most part, people in Tompkins County seem to be vehemently opposed to the executive order,” Chaffee said. “I have been receiving numerous emails and calls from many immigrants and refugees who we have provided services for, from our funders, volunteer groups and people calling on behalf of their businesses or agencies showing their support and solidarity in these troubling times.”

Through Catholic Charities’ “Ithaca Wants Refugees” postcard campaign, 2,526 postcards were sent to Trump on Feb. 8 to express concerns about the refugee ban. Chaffee sent a letter of thanks to Myrick detailing this campaign, which Myrick posted to his Facebook page.

Similarly, Ithaca Welcomes Refugees stated it has also been emboldened by the community support.

“We are very troubled by the recent Executive Orders, and we are working very hard to learn more about what it means for Ithaca in particular,” the organization stated in a Facebook post. “Nonetheless, we will continue to do everything in our power to bring people together and move forward in the name of peace, compassion, and community. We hold steadfast in our belief that the United States must remain open to people of all backgrounds and faiths, and we stand in solidarity with refugees.”