Ithaca celebrates its many co-ops during national co-op month 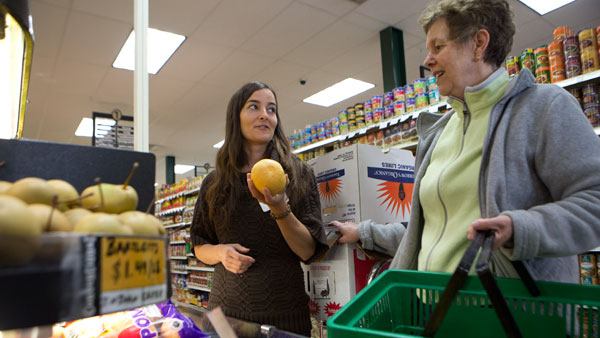 October is National Co-op Month, and Ithaca has more than 80 years of cooperative history to motivate the community to continue expanding its co-op landscape.

A cooperative, or “co-op,” is a legal entity owned and democratically controlled by its members. All members have equal ownership, with one person, one share, one vote. Co-ops come in a variety of forms, but all share a common purpose of serving the members and the community.

According to the Cooperative Development Foundation, the modern cooperative movement began in 1843 when a group of workers, dubbed the Rochdale Pioneers, in Rochdale, England, went on strike. They were unhappy with their conditions and wanted to collectively open a store to get goods without paying outrageous prices. The workers also developed cooperative principles to govern their organization.

Almost 100 years later, the Cooperative Consumer Society formed as one of the only co-ops in Ithaca, with a small supermarket on West Clinton Street. The cooperative boom in the city began in the 1970s, with the opening of Alternatives Federal Credit Union, Handwork and the Ithaca Real Food Co-op, a healthy food store that sold local farmers’ produce. Real Food was also the parent organization of GreenStar Cooperative Market, which today remains Ithaca’s only cooperative grocery store.

Dan Hoffman has served on GreenStar’s board of directors since the 1980s. Hoffman said co-ops have been and continue to be an important part of Ithaca’s landscape.

Hoffman said Ithaca has a strong activist and progressive history, which has helped spur the energy and open-mindedness necessary to form and maintain co-ops.

“You have to find satisfaction in establishing a community-controlled institution,” he said. “Activists seem to have that spark. They’re willing to devote an unusual amount of time to causes that don’t bring them personal or financial benefits in the ways we normally think about it.”

Hoffman said GreenStar is democratically operated and more participatory than most businesses. The co-op allows members, who pay $10 per year to earn their membership, to serve on committees, the board of directors and work at the store for a 17.5 percent discount at the register.

David Kingsbury is one of the member artisans of Handwork, Ithaca’s cooperative craft store located on West State Street. He said Handwork blends business aspects of making a living and the aesthetic standards of making art with a like-minded group.

“It’s a way of trying to do business with no one person taking on the full load,” he said. “You get to make group decisions … and have an ability to share risks.”

Describing different forms of cooperatives, Hoffman said Ithaca has consumer co-ops, which are retail outlets like GreenStar. The Ithaca Farmer’s Market is a producer co-op where farmers sell their goods together. Worker-manager co-ops are similar to Moosewood Restaurant, which was originally operated by its owners, while credit unions are cooperatively owned financial institutions.

There are also small-scale co-ops like Buffalo Street Books, which engages hundreds of students each semester, as more than 20 professors at Ithaca College sourced textbooks from the store this fall. Devan Rosen, assistant professor and emerging media program director, ordered books for his seminar about roots movements and independent media.

Rosen said he supports the Bookery because more money stays locally and his students become exposed to a cooperatively owned and responsible organization.

“Not only do I think it’s responsible as a professor at Ithaca College and a member of the Ithaca community to use Buffalo Street Books, but it’s actually part of the lesson of why this is the right decision in the class,” he said.

Buffalo Street Books became a cooperative in 2011 after the community rallied to buy the financially struggling store. General manager Asha Sanaker said Buffalo Street Books has a classic co-op structure where a portion of the profits generated goes back to the owners. It also maintains local character.

While younger generations see co-ops as alternatives to the corporate world they grew up in, Rosen said co-ops are becoming the norm because many people are tired of profit-driven organizations running what could otherwise be a healthy community.

The co-op movement has also influenced groups that do not meet the standard definition of a co-op, because they are not member owned, to adopt cooperative principles.

Students like Liz Camuti, a senior at Cornell University, are a growing part of this healthy cooperative living. Camuti said she is the president of the Prospect of Whitby, which is one of seven university-owned, but student-run, housing facilities.

Julie Paige, assistant dean of students for cooperatives, said while Cornell owns the co-op housing, students run it with no live-in staff, and they pay room rates that go directly into the co-op, not to the university.

Camuti said ownership is based on the pooling of resources, democratic decision-making and working toward goals that benefit the house as a whole.

“It has taught me how to be a compassionate leader and take into consideration what’s best for the community,” she said.

Elm Street Co-op is a community residence, which Hoffman owns but runs cooperatively. Hoffman said co-ops exist for the good of the group and can leave a community legacy.

“You can create an institution that will outlive a particular owner or family,” he said. “If it really takes hold in the community, the community feels and has ownership of it.”

Alternatives Credit Union is a co-op that has survived to serve the community beyond the original intent for its creation. A member-owned bakery created the credit union in the ’70s after a bank rejected its loan request because it was a co-op.

Karl Graham, who is the director of community relations and development at Alternatives, said the credit union was the first employer in Ithaca to pay its staff a living wage in order to create economic opportunity for the community.

“Today, there are up to 90 certified living-wage employers in the county,” he said. “This is a great example of something we did for our staff that has had tremendous benefit beyond folks who live here.”

McKenzie Jones-Rounds hopes Ithaca Biodiesel, the energy co-op she helped found, will have the same success. Jones-Rounds said the co-op is still getting start-up funding, but hopes to expand to help move Ithaca toward energy independence.

“We’re trying to create a new paradigm, and it’s easier to make that shift when we’re doing it with a whole group of people with shared vision,” she said. “It’s a way for us to make sure that Ithaca is on the right path, and we’re stronger in numbers.”