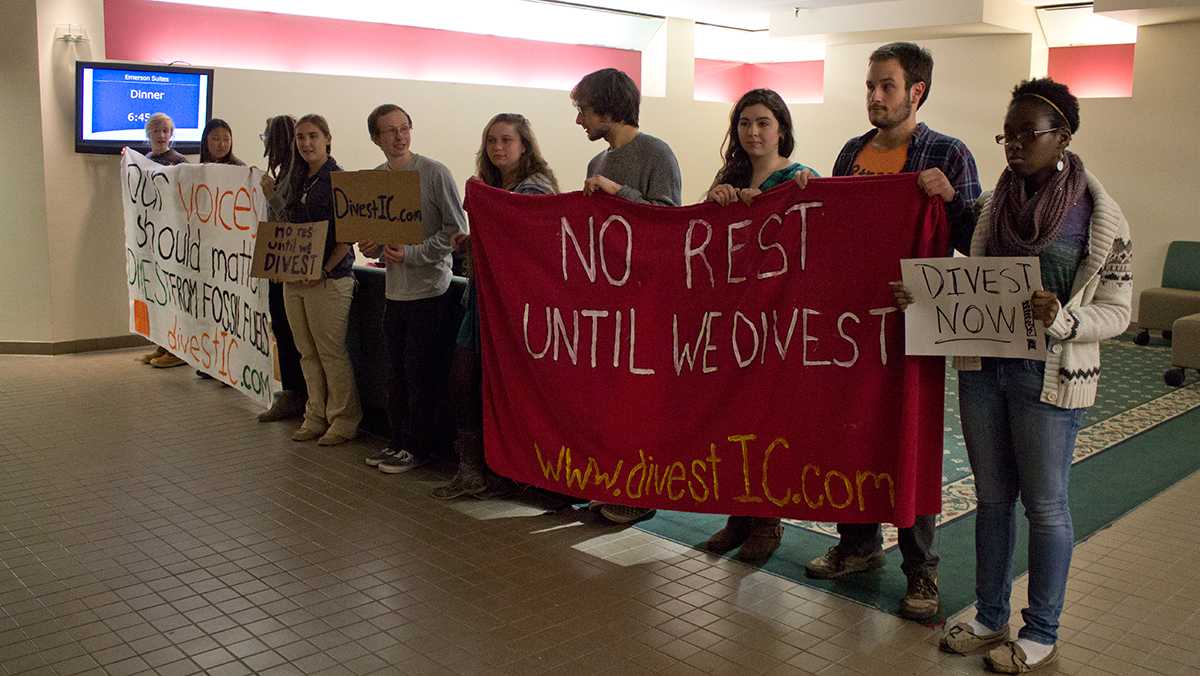 The Cornell University Board of Trustees has announced Cornell will not be divesting from fossil fuel companies. Ithaca College students remain hopeful for their efforts to achieve divestment on South Hill.

Cornell’s board of trustees announced Feb. 2 the creation of new guidelines that specify the university will only divest its endowment funds from companies whose actions are “morally reprehensible.” These guidelines do not include fossil fuel companies. This decision came following bills passed by every constituency at Cornell urging the board to divest.

Divestment is a national environmental movement spearheaded by 350.org, which encourages universities, cities, churches and other private organizations to remove their investments from the fossil fuel industry and reinvest them in socially and environmentally responsible sources.

Colleges across the country have been choosing to divest over the past few years. Syracuse University joined the list of colleges that chose to divest from fossil fuels April 2015. Although Ithaca College’s movement has all but disappeared, the college has its own divestment organization known as Divest IC. Ren Ostry ’13, was a part of the movement during her time at the college.

Divest IC was meeting with the Ithaca College Board of Trustees regularly to try to convince them to divest, but it hit roadblocks when it came to the administration, Ostry said. Gerald Hector, vice president of business and finance, said he was unavailable for comment on this subject in time for the publishing of this article.

David Shalloway, professor in the Department of Molecular Biology and Genetics at Cornell and member of the divestment movement, said the most important way to fight climate change right now is through policy actions. Shalloway said divestment would not have hurt Cornell’s endowment because not much money is invested in fossil fuels. He said a move to divest would be more of a symbolic gesture. But, he said, “Symbolic gestures have power.”

Shalloway said climate change is a generational struggle and compared it to the struggles students faced during the Vietnam War.

Ostry said the Divest IC movement compared to the current struggles that People of Color at Ithaca College — a group that was formed in response to recent racial tensions at the college — faced when dealing with the administration.

“Especially with what’s happening right now with POC at IC, it is demonstrated clearly again how much of a front the administration puts on to make students feel heard when really nothing is changing,” Ostry said.

Ostry said the members of Divest IC ultimately decided to reorganize their group and put their efforts toward supporting other issues on campus, like racial issues.

Today, Divest IC has been taken over by IC Progressives and is headed by junior Catherine Proulx, who is co-chairwoman of the organization. Although Proulx is studying at the Ithaca College London Center this semester, she said when she returns next fall, she said she hopes to be involved with environmental issues on campus.

“I am really going to be doing as many environmental actions as I can on campus about divesting, about composting and about environmental awareness because I think that is really low on campus,” Proulx said.

Marlene Barker, associate professor in the legal studies department and chair of the School of Business’ sustainability committee, said divesting from fossil fuels is a bold move.

“It’s more a question of the future,” Barker said. “I think it’s smart investing — if the future is renewables, why not get on that route right now?”

Ostry said she believes it is still possible for the college to divest from fossil fuels. She said the retirement of President Tom Rochon in 2017 will be “instrumental” to the progression of Divest IC.

Ostry said during her time at the college, Rochon “created a mock air of transparency” and was, “a massive roadblock to the divestment campaign.”

“If the [new] president is more aware of social change that should happen on campus, then we definitely have the potential to divest,” Proulx said.

Proulx said divesting could be beneficial for the college down the road.

Jason Muenzen, director of the investment program in the business school, said he believes divestment is an important factor in sustainability.

“We all know that resources are finite, and there is social, health and life impacts to fossil fuels, and so I think the key is that people need to think about the role that investing plays when it comes to business,” Muenzen said.

Junior Joshua Enderle, an active environmentalist on campus, said Cornell’s decision could be a good thing for the college.
“It is an opportunity for Ithaca College to differentiate ourselves and be ahead of Cornell,” Enderle said.

Rachel Langlitz can be reached at rlanglitz@ithaca.edu or via Twitter: @wellthenrachel