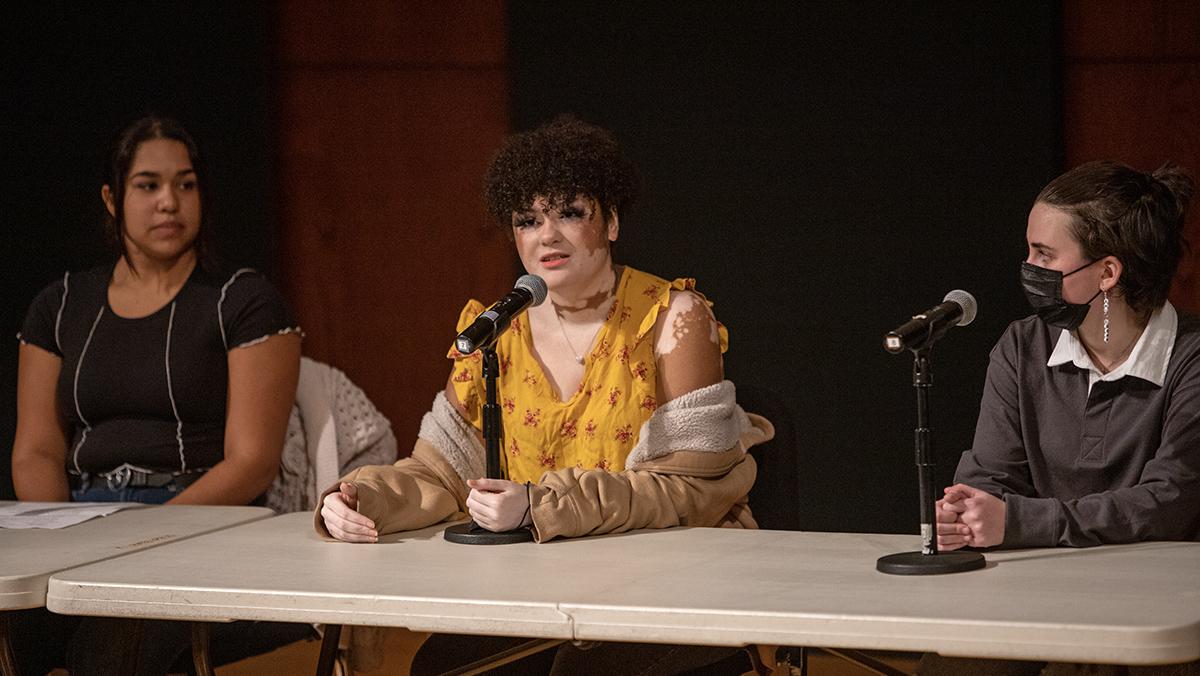 Xinyi Qin/The Ithacan
From left, junior Alexa Rahman, first-year student Taya Thompson and senior Shosh Cohen discussed the prejudices they have independently faced in their lives and on campus, each noting the ignorance of others and the importance of educating people about racism.
By Emma Kersting, Joshua Pantano, Noa Ran-Ressler, Vivian Rose — Staff Writers
Published: November 16, 2022

On Nov. 15, Lauren Goldberg, executive director of Hillel at Ithaca College, took the stage of Hockett Family Recital Hall to begin the college’s second full Day of Learning event of 2022. The first was held Feb. 28 after two swastikas were found on campus. The November events had between 15 and 50 attendees.

The event, called “Addressing Antisemitism: Fighting Hate for Good,” took place in response to three swastikas that were found Nov. 4 in the college’s James J. Whalen Center for Music, the same building where the seminars were held. In total, eight swastikas have been found on campus in 2022, five of which were located in Whalen and the attached Baker Walkway.

The day began with an introductory session led by Goldberg, called “Who are the Jews and What is a Swastika? Defining our Terms.”

“I want to recognize the fact that this is the second time we’ve done this,” Goldberg said. “We recognize that justice is a constant pursuit. It’s aspirational.”

Goldberg said the purpose of the day was to provide education and action items to fight antisemitism regardless of experience or knowledge of the issue.

“By not having a one-off program, we can approach what is an incredibly complex topic,” Goldberg said. “We can approach it from all different dimensions. I’m hoping that there’s gonna be a wide range of folks in the audience … and what I hope today will bring is enough rich material for everyone to work with.”

Goldberg said this second Day of Learning would be more interactive than the first. She said the focus would be on engaging with the material.

Yasin Ahmed, director for the Office of Religious and Spiritual Life, also spoke at the seminar. He said empathy is important to effectively educate people on antisemitism.

“The objective of our learning today is to reawaken the empathy within us,” Ahmed said. “Within you … is the seed of empathy that is willing to be nourished and come to fruition.”

In the final minutes of the seminar, Goldberg encouraged audience participation through questions like “what are some of the conditions that are creating the current climate [of antisemitism]?” Attendees could answer to the whole group through a microphone or anonymously through the interactive presentation software Mentimeter.

Responses to the prompt included “politics,” “social media” and “the internet,” “fear,” “misinformation,” “stereotypes” and “scapegoating.”

The second event of the Fighting Hate For Good series was a presentation given by Rabbi Ron Fish, northeast division director of antisemitism advocacy and education for the Anti-Defamation League (ADL), titled “Antisemitism Uncovered: A Guide to Old Myths in a New Era.” The ADL is an anti-hate initiative in the United States with the goal of ending the negative views of and actions against the Jewish community.

Fish’s presentation discussed the conspiracy theory of antisemitism, which Fish defined as the belief that Jewish people are secretly in power over other communities to the disadvantage of the larger society. Fish also addressed the common antisemitic myths of power and disloyalty being associated with Jewish people. Fish said colleges should create a welcoming environment to different beliefs without allowing room for hate.

Fish said countries in Western Europe and the United States have always created barriers that cast Jewish people as foreign through common national identities like language or religion.

Fish said that despite coming from a wide range of ethnic, social and political backgrounds, Jewish people are all put into one ostracized group. Fish said that removing individuality is harmful to the Jewish community and any group of people.

“That notion that Jews are one thing is the ultimate way to dehumanize any group,” Fish said. “And to believe that there’s a conspiracy among the Jews is core to building out the antisemitic worldview, which is most dangerous.”

To close his presentation, Fish ensured the audience that despite the deep history of antisemitism in the world, Jewish people today still have many avenues for support through programs like Hillel International and that students should not feel discouraged in times of intense antisemitism.

“Don’t allow yourself to be drawn into a dark place of hopelessness or cynicism, because we have great opportunities in America,” Fish said. “We are not alone. We have a lot of allies, and we don’t have to live in fear. But we do have to live with self–awareness.”

Decoding Antisemitism: An Interactive Exploration of Hate & Its Impact

Chris Sperry, director of Curriculum and Staff Development at the college, spoke alongside Goldberg and Cyndy Scheibe, Dana professor in the Department of Psychology, in the discussion called “Decoding Antisemitism: An Interactive Exploration of Hate and Its Impact.”

The three speakers spoke about coded antisemitism — which refers to how antisemitic comments are hidden in media in plain sight — and how it has appeared in media for decades. Sperry led the discussion and began by discussing older media, like posters from as early as 1922 made by Henry Ford and a 1937 poster advertising an exhibition called “The Eternal Jew,” which toured Germany.

Not only did the speakers discuss how antisemitism has been portrayed in media, but they also spoke about how conspiracies and false stereotypes can be created through these harmful pieces of media. One example is a 1903 book titled “The Protocols of the Learned Elders of Zion.”

Goldberg explained that the book can still be purchased and was written from the perspective of a group of Jewish people coming together in a secret meeting as they plot to take over the world. Goldberg said it was written that way to convince readers that Jewish people are evil. However, the book is completely fictional.

Goldberg also said that events like this Day Of Learning are not just to inform the community about what has happened but also to provide some optimism to those attending the events so they can go on to create effective change.

“It’s not just about sitting here, it’s about hopefully disrupting behaviors going forward,” Goldberg said. “I really do think that there’s great power in meeting a moment while being in it and reacting quickly.”

Goldberg compared the event to a Jewish day of study, a Yom Iyun, which is a meeting of a family or group of people. Its purpose is to make time available for voices to be heard in a collaborative and interactive space.

Scheibe said in Spring 2023, the college will hold monthly events about mis- and disinformation with panels. Scheibe said she hopes that these events will serve as opportunities for students to get engaged, since the events Nov. 15 were all faculty–run.

“I think it’s a time for students to step up and not just have faculty or staff or the administration organize the events and invite handpicked people,” Scheibe said. “I think that students need to suggest what they need.”

Luca Maurer, interim executive director of Student Equity and Belonging and director of the Center for LGBTQ Education, Outreach, and Services, led a panel about what students should do if they find a hate symbol on campus.

The panel was originally going to be “The Intersectionality of Antisemitism,” but speaker Rebecca Lesses, associate professor of the Department of Philosophy and Religion, was unable to attend.

Maurer said there are two steps that students should take after encountering hate symbols. First, he said they should not erase any hate symbols found because officers from the Office of Public Safety and Emergency Management (OPS) will need to document all evidence. He also said students should contact the OPS at 607-274-3333 or leave an anonymous voicemail at 607-274-1060.

In addition to contacting OPS, Maurer said students can file a Bias Incident Form. The form will not notify the OPS. It is also not a formal report process and will notify members of the Bias Impact Resource Team.

Tom Dunn, associate director of the Office of Public Safety, said all incidents of hate symbols will be investigated by the OPS. Dunn said officers will interview witnesses, collect evidence and take further safety measures, like the recently announced plan to add more cameras to the James J. Whalen Center for Music, where three swastikas were found during November 2022, as well as one in February 2022.

“These cases are often sometimes difficult to ascertain who is responsible,” Dunn said. “That’s the most painful part of the job … not being able to bring closure to some of these cases where we don’t know who or why it was done.”

Elyse Nepa, assistant director for Clery Act and crime prevention coordinator for the OPS, said students should pay attention to the Public Safety Alerts, which notify the campus community via email when hate symbols are found.

At the end of the panel, Cantor Abbe Lyons, Jewish Chaplain and Business Manager for Hillel at Ithaca College, said students should seek resources to help themselves and others if necessary.

“I know when I’m faced with an uncomfortable choice, I usually want to talk to someone about it,” Lyons said. “We need to think about those messages and their impact on us and figure out how to take care of ourselves and each other.”

The three students discussed the prejudices they have independently faced in their lives and on campus, each noting the ignorance of others and the importance of educating people about racism.

Cohen was the first to share their story, telling the audience about their Jewish upbringing and their experiences going to private Jewish schools. They gave an emotional testimony about the intimidation that comes from hate symbols like the swastikas across campus.

“When you hear the news of a hate symbol, a swastika being drawn on your campus, that’s like, ‘wow, OK, someone really doesn’t want me to be here,’” Cohen said. “And that’s, that’s really scary.”

Microaggressions are indirect or subtle acts of discrimination against marginalized groups and are at times unintentional. Cohen spoke about the lack of support for the Jewish community in academics, particularly because classes are never canceled for Jewish holidays, making it challenging to observe them.

“If you react to 14, 17, how many microaggressions that are thrown at you within just a single conversation, you will automatically be labeled as the angry Black person or, in my case, because I am a female–presenting person, the angry Black woman, and I refuse to be that stereotype,” Thompson said. “But it’s really hard not to react in the way I want.”

Thompson said they feel it should not be their job to constantly have to educate people on their prejudices and subtle racism.

Rahman said she grew up in a predominantly white neighborhood and said she felt that as one of few women of color, she needed to work two or three times as hard as her white peers to be recognized on the same level for her accomplishments. When speaking on racism she has faced, Rahman said she notices more issues of racism among students than in her interactions with faculty, staff and administration.

“There’s a lot of students who are very performative, and when we have conversations about race and class, there’s not a lot of room for my voice,” Rahman said. “I’m hearing a lot of white people talk about racism and the experience of racism. … Honestly, it’s really hard to get up and go to a class where you feel like they’re talking about you, but you don’t really have a full say.”