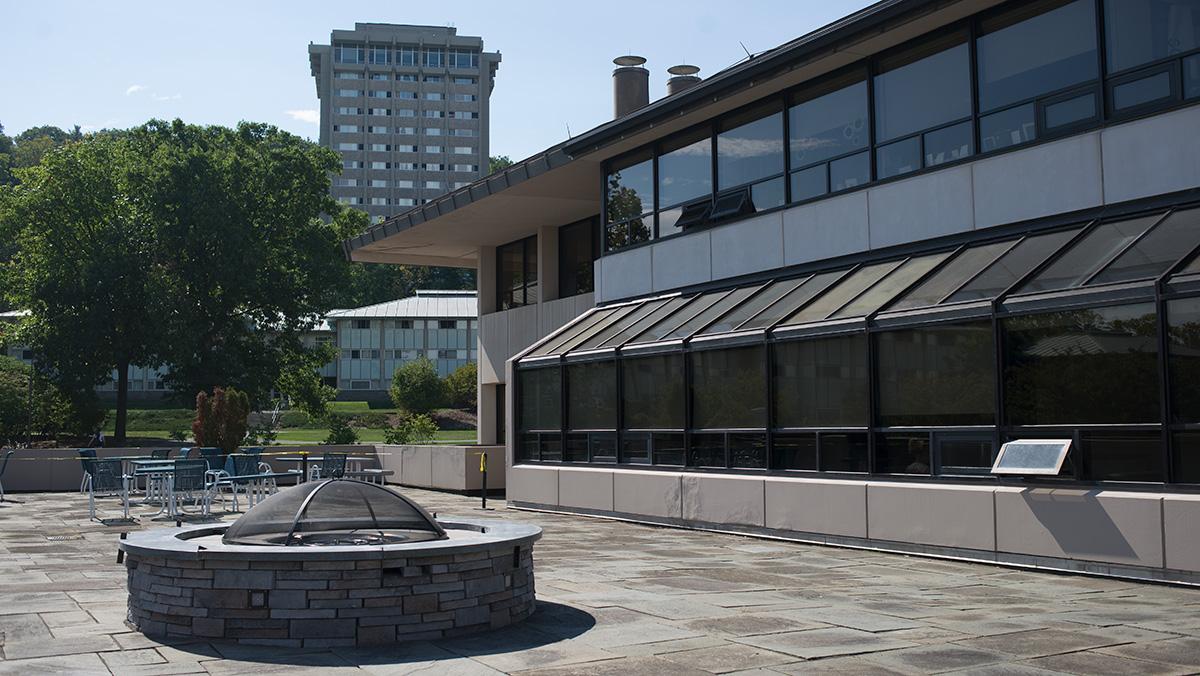 Fernando Ferraz/The Ithacan
Pictured above is the newly built fire pit outside of the McDonald Lounge. This addition was a part of Ithaca College's Master Plan, a key aspect of which is to create more student gathering spaces like this one.
By Devon Bedoya — Contributing writer
Published: September 23, 2016

This year, several outdoor gathering spaces will be built on campus as one of the first installments of Ithaca College’s Master Plan.

The Master Plan is a long-term outline of several maintenance projects around campus, including building renovations and realignments of residential and academic zones. This year’s focus is on creating outdoor spaces where the campus community can come together, said Tim Carey, associate vice president for the Office of Facilities. Specifically, outdoor seating is planned for the east side of the Roy H. Park Center for Business and the front of Dillingham Center, and a fire pit is planned for the terrace outside of the McDonald Lounge in the Campus Center.

“We are trying to get our students, our faculty and our community to embrace the outdoors a bit more as part of our Master Plan,” Carey said.

Carey said the additional seating outside of Dillingham and the park center are projected to be completed in late October. The designs include modern-looking tables, chairs and benches to make the space more inviting, he said. He said the McDonald Lounge fire pit should be finished within the coming weeks. Before the fire pit area is completed, a new doorway will be built that will connect McDonald Lounge with the deck and make the space more accessible.

David Prunty, executive director for Auxiliary Services, said he hopes the space will be used daily and attract more attention once it is finished, as it is different from any other gathering space on campus.

“The space isn’t used very much right now because it’s not easy to get to,” Prunty said. “Having a visible, attractive area with a fire pit will hopefully allow people to use the area more often.”

No rules or regulations have been finalized yet because the fire-pit gathering space is still a work in progress, he said.

Prunty said he and his colleagues have not yet discussed advertising for the McDonald lounge area.

“The Campus Center lobby is packed all the time, so the hope is that people just start to find this space and that it becomes a thing versus having to say, ‘Hey, come look at this!’” Prunty said.

However, sophomore Greg Lee said word-of-mouth may not be enough to bring people to the space.

“Incorporating the outdoors is a good idea, but I’m not sure that these gathering spaces will be successful in doing that,” Lee said. “I think you’d have to get the word out first so people might know about the spaces and take advantage of them.”

The campus community can collaborate on construction and renovation projects by sending in requests through the Project Approval Request process, overseen by the Division of Construction Planning and Design in the Office of Facilities. Carey said this is the first year that students have been allowed to be involved in the PAR process, a decision he said was made in an effort to be a student-centered campus. He said he hopes to collect feedback from the PAR process on these gathering spaces and on the desire to create more of them.

Some returning students are enthusiastic about the new gathering areas on campus.

“I think that it’s a great idea,” sophomore Chris Barnes said. “Certainly, we have a lot of open land here that isn’t put to use other than to toss a Frisbee around. If you can’t put flowers or trees in these open spaces, bringing people together is a good way to put the land to use for the community.”

Junior Richard Cruz said the spaces could give busy students a chance to relax.

“I’m personally excited to see this happen,” Cruz said. “I’d like to see outdoor seating outside of the music school, too. People are in the music school for eight hours at a time sometimes. If they had a chance to sit outside and talk to people, that might ease some stress.”

If the gathering spaces and the McDonald lounge fire pit prove to be popular, Carey said, he hopes to include an additional gathering space outside of Terrace Dining Hall. This area would have patio furniture where students can enjoy eating outdoors, he said. However, the project wouldn’t be pursued until the next fiscal year.

A proposed fundraising campaign by the Division of Institutional Advancement aims to raise $150–200 million by 2020 to go toward the priorities of Ithaca College’s strategic plan, IC 20/20.